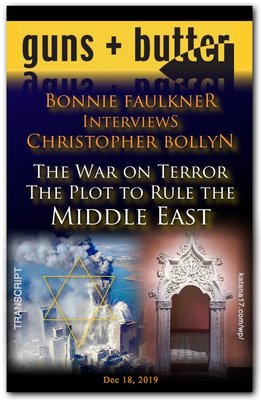 Bonnie Faulkner from “Guns and Butter” interviews (Dec, 2019) Christopher Bollyn, the investigative reporter who has been studying 9-11 from day one, and is the author of “Solving 9-11: The Deception That Changed the World” and his recent book, “The War on Terror — The Plot to Rule the Middle East”.

Christopher Bollyn’s work proves beyond any doubt that 9-11 was carried out by organized jewry through Israel and zionists within the US, to create their “War on Terror“, aka, “War OF Terror“, in order to justify the smashing of Arab countries, and others, per the Oded Yinon Plan, as part of a scheme to create a “Greater Israel” domination over the Middle East, as well as their larger New World Order agenda involving the further subjugation of all White countries.