A video recently came out of Trump claiming that "Israel literally owned Congress" - and he said it was a good thing, but that they don't own it anymore. He said this on an interview on the Ari Hoffman show. Hoffman is Jewish.


"The biggest change I've seen in Congress is Israel literally owned Congress — you understand that — 10 years ago, 15 years ago. And it was so powerful. It was so powerful. And today it's almost the opposite. You have between AOC [Alexandria Ocasio-Cortez] and [Rep. Ilhan] Omar — and these people that hate Israel, they hate it with a passion — they're controlling Congress, and Israel is not a force in Congress anymore. I mean, it's just amazing. I've never seen such a change. And we're not talking about over a very long period of time, but I think you know exactly what I'm saying. They had such power, Israel had such power — and rightfully — over Congress, and now it doesn't. It's incredible, actually."
- Donald Trump

The ADL is not happy:

Israel does not control Congress. U.S. support for Israel remains strong and bipartisan. As ADL has long said, these types of remarks play into tropes about “Jewish control” of government and are unacceptable. https://antisemitism.adl.org/power/
jta.org

Trump: Until recently Israel 'literally owned Congress' — and that was a good thing - Jewish...
Donald Trump uses a trope that has gotten other politicians into trouble. 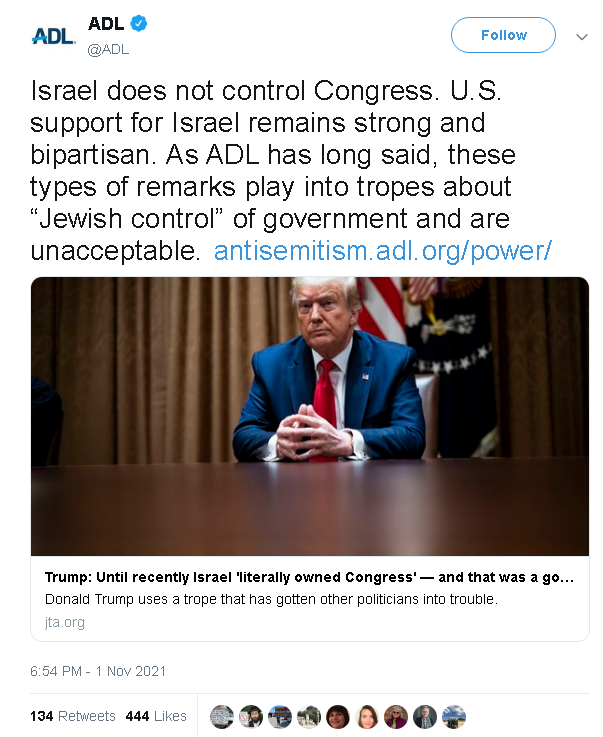 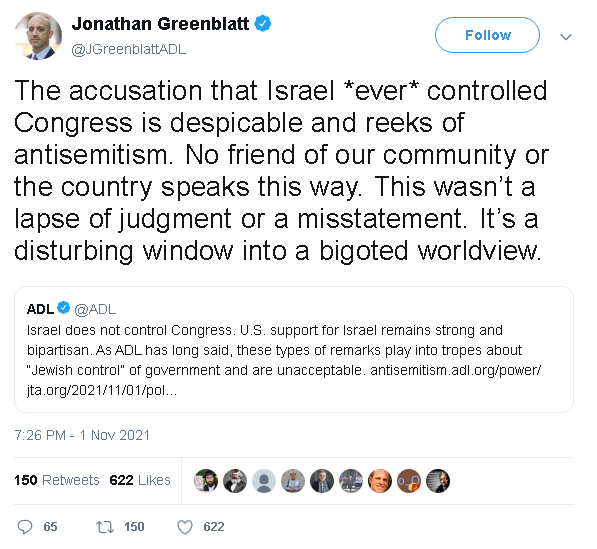 The accusation that Israel *ever* controlled Congress is despicable and reeks of antisemitism. No friend of our community or the country speaks this way. This wasn’t a lapse of judgment or a misstatement. It’s a disturbing window into a bigoted worldview.

Israel election meddling in the United States
viewtopic.php?t=13761
"There is a principle which is a bar against all information, which is proof against all arguments, and which cannot fail to keep a man in everlasting ignorance -- that principle is contempt prior to investigation."