According to the “BBC NEWS” Website, Israel is far, far ahead of the rest of the world in inoculating it’s residents, which brought several questions to my mind:
1 Do the non Jewish residents of Gaza, the Golan Heights and the West Bank of the Jordan receive the same rates of inoculation?
2 Do the non Jewish residents living within the pre 1967 borders of Israel receive the same rates of inoculation?
3 Is the United Nations going to investigate and then sanction Israel for it’s selfish commandeering, at such a disproportionate and inequitable use of available vaccine, at the expense of….THE ENTIRE REST OF THE WORLD!?
4 Are the “BLM” people utterly dismayed at the inequity of Israel’s vaccine hoard as compared to ALL of the South Saharan African nations combined?
https://www.bbc.com/news/world-55514243 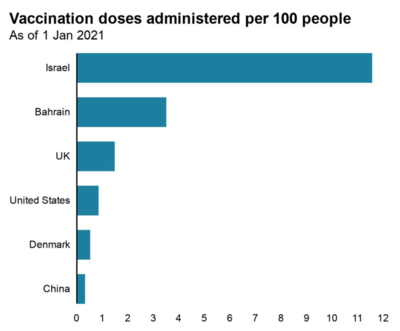