Ruins of Krema V merged with the resistance photo.

Smoke from the Krema V area

Don't you have any comments yourself?

The cremation photo, if authentic, doesn't show anything incriminating. During the typhus epidemic of 1942 the death toll was massive, and open-air burnings are acknowledged to have happened. That photo has been dealt with thoroughly and I'm more eager to get to the air photo.

Notice how the smoke can be followed back to one rather small point. It is clear that whatever is burning is concentrated in a very small area, and is definitely not a huge trench full of bodies. I would guess that it shows the burning of a garbage heap, perhaps containing lice-infested clothes that were deemed unnecessary to recycle. That's also what could be shown in the famous resistance photo. The stripping of bodies and burning of clothes.
Top

Richard Perle wrote:During the typhus epidemic of 1942 the death toll was massive, and open-air burnings are acknowledged to have happened.

The pictures of the bodies were made around the beginning of September 1944, according to
http://www.sonderkommando-studien.de/ar ... resistance

A witness states that the pictures show the burning of bodies.

The aerial photo was made on August 23, according to
http://www.guardian.co.uk/military/stor ... 88,00.html
Top

Vallon wrote:A witness states that the pictures show the burning of bodies.


Yeah, but it is all hearsay at best. Even David Schmulewski, the resistance agent that supplied the photos, IIRC, did not actually take them, or at least was unavailable to supply an affidavit from direct experience, and was never cross-examined either. It looks like a photo showing the burning of lousy clothes to me. Even if they are burning corpses the important part is the gassing not the cremation. And the ill-composed "companion" photo showing women getting undressed is part of an ordinary delousing experience and not necessarily connected to the two Sonderkommando photos. This stuff might prove interesting for the Polish Resistance and for spreading atrocity-propaganda, but it is not good evidence for courts of law or historians.

Scott, as you said:

All the smoke is coming out of one of three oblong objects in the corner.

This is one of the sharpest pics I've ever seen of this.

Does anyone have the scale of this? I'd like to know the dimensions of the oblong object emitting the smoke, and the other two oblong objects.

One problem with the Polish resistance pic, is that if they dug a pit several meters deep (in that swampland?) there should be a pile of dirt several meters high on ONE side of it. There's no pile in the ground pic, and the oblong objects, if they are trenches, have what seems to be dirt piled in a circle around them. If that's what it is.

Can that corner be isolated and zoomed on?
Top

The ground photo has been thoroughly debunked here:

The aerial photo, assuming it hasn't been altered like so many other aerials, simply shows smoke from a small source. So what? It certainly doesn't conform to the 'holocau$t' tales.

lazamtlob, tell us what you find significant about these photos ... which you posted without comment.

And why no comments?

Here's something I noticed. Krema IV, the left of V, has no smoke - that's to be expected, at that time, it's furnaces had burned out, they only lasted about 6 weeks before they failed, and the building was then used as a dormitory.

But Krema V - the one where the ditches are - was still in operation at the time, in fact, was the last of the Krema's to be shut down. If this was taken during the "Hungarian extermination" - as the standard story goes, that's when the outdoor cremations were - then why is there no smoke coming out of Krema V's two chimneys (at the bottom of the building, opposite the smoke source). While it was on a reduced basis - Krema V was build out of inferior refractory materials - they were still using it.

If this is during the overload of the Hungarian extermination, then why no smoke out of Krema V?

And is there a bigger version of this pic that includes Krema's II and III? Again, according to the story, they should be going full blast right now, with plenty of smoke.
Top

According to the goofy storyline this is what was happening at the crematoriums: 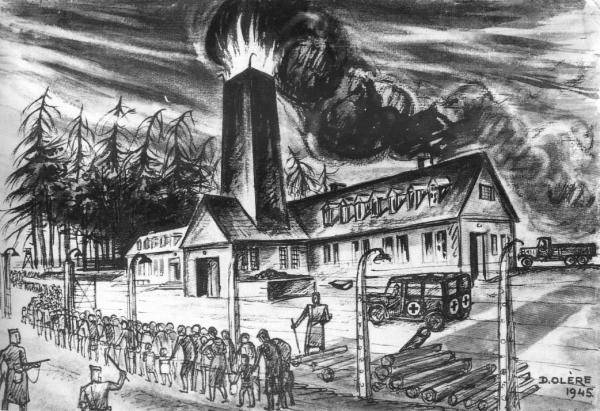 But no photos show such sights even though the photos occurred at the time of alleged heavy gassings/cremations of Jews.

And notice all the dark blobs all over the photo ... hiding something? Trying to add something? I assume the full on shot which shows Cremas II-III has the embarrassing fake, drawn on Zyklon-B chimneys/ports as well. Only with things 'holocau$t' does obvious tampering pass as reality.

Nothing personal, but the photos posted by lazamtlob blow up in his face.

Revisionists are just the messengers, the absurd story is the message.

Actually, I didn't say it but it looks to me like what is happening is that corpses are being stripped of their clothing--and then the infested clothing not worth recycling is being burned in a small bonfire behind Krema V. The corpses will then probably be cremated in the ovens of Krema V. There is no proof whatever of wrongdoing inherent in the photo. It was just probably easier to work outside when the weather was good.

Besides, the smoke seems to be wafting and doesn't look at all like a vigorous updraft, as one would expect from a hot cremation blaze.

And even if the photo does in fact depict open-air cremation of cadavers, it does not necessarily follow that this is because the crematorias couldn't handle the numbers of dead. They might have been broken down that day or out of coke fuel or something.

For this photo to really show anything the photographer would have to be vigorously cross-examined. Otherwise it is poor evidence of anything.

Scott wrote:And the ill-composed "companion" photo showing women getting undressed is part of an ordinary delousing experience and not necessarily connected to the two Sonderkommando photos.

One of the prints of the pile of bodies (#281) is overlapping a bit with the contact print of the naked women (#282).
The series has been reconstructed like this:

The connection strongly suggests that the bodies were not undressed by the workers. The interpretation that they were burning clothes is unlikely. We know that clothes were fumigated and selected. The lowest quality material was sent to a paper mill, not burned.
Top

I understand that. I was saying that open-air burnings happened on at least one occasion, so a photo of one such occasion doesn't prove anything incriminating. But just because someone has oriented the photo onto a modern photo of the krema ruins doesn't mean that it really is the same location.

Testimony from the Auschwitz communist underground should be treated with extreme caution, if not rejected outright. I don't think I'm being unfair here.
Top

The ground photo is a communist fake: 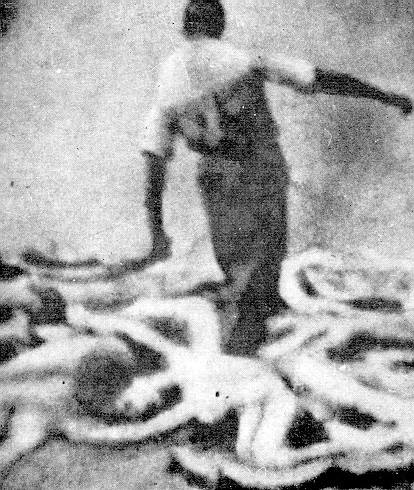 There is a recent thread on this, why are we debating it here?
See:
'typical Nizkor phoney 'holocaust' photo'
http://forum.codoh.com/viewtopic.php?t=1103

Hannover wrote:
There is a recent thread on this, why are we debating it here?
See:
'typical Nizkor phoney 'holocaust' photo'
http://forum.codoh.com/viewtopic.php?t=1103

I can't believe you're still using this pic as an "evidence" of fraud. This pic has been "enhanced", photocopied, "bettered", photocopied again, and scanned, then photocopied again. Some characters in a pic like that are going to look strange eventually.
The pics are from Krema V and they show burnings of people. And when you add this.

We have a case.

By "bettered" and "enhanced" you mean doctored.

The pics are from Krema V and they show burnings of people.

Neither of those points are proven, and I think the latter point is unlikely. It looks much more like an outdoor stripping of bodies and burning of infested clothing to me. But regardless of what is burning there, there is nothing to indicate how the people died, so I don't see any point in spening much time on it.
I have already pointed out that the smoke in the air photo originates from a small source point, which immediately precludes it from being one of the mythical giant trenches for burning gassing victims. Why are you still trying to push it as proof? What problem do you see with my interpretation?

How could we? The image is tiny.
Top
Post Reply
21 posts