This is supposedly a photo of Kurt Franz at Belzec 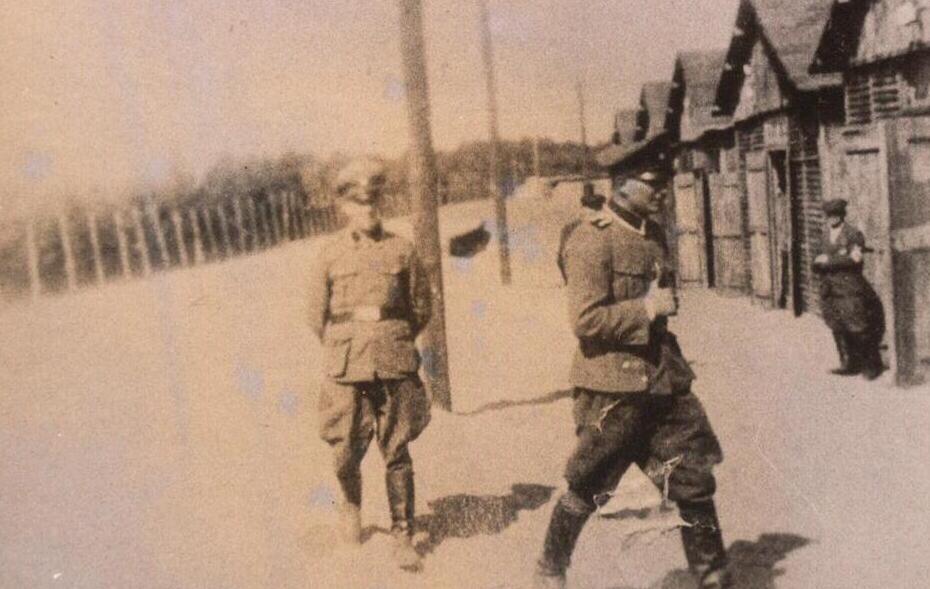 Same barracks as in the photos above it seems.

A higher quality version of the photo of a work detail at Belzec with a (Ukrainian?) guard. Here it is evident that some of the prisoners are smiling too. 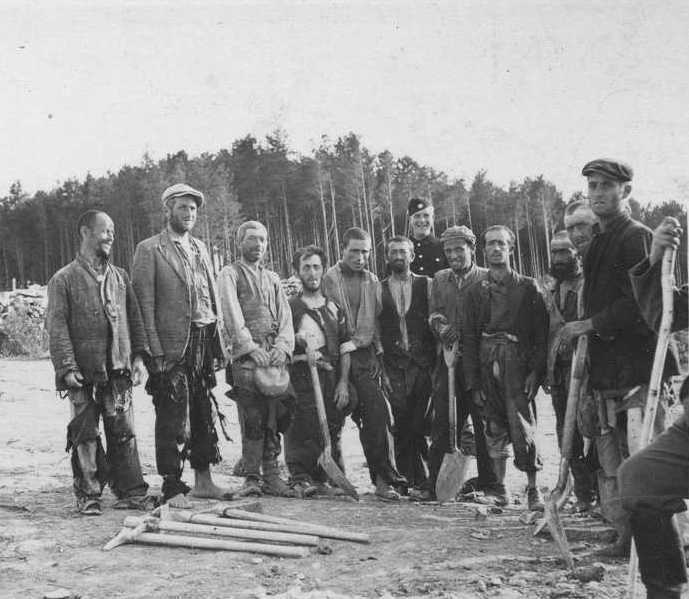 A higher quality version of the photo allegedly showing a Belzec prisoner shot at the latrine. Note the simple, low fence in the background: 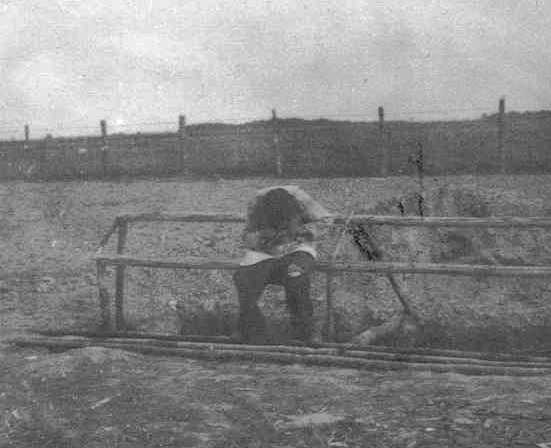 This photo allegedly shows Sobibor before or during the initial phase of the camp:

Looking at a 1936 Polish map one can see that there were buildings and a hunting tower at the site of the later camp grounds.

This photo allegedly shows either workers at Sobibor or the Sobibor camp being dismantled autumn 1943: 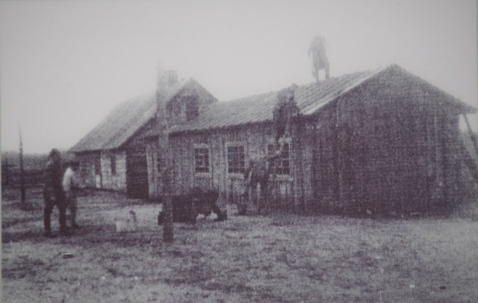 A higher quality version of the Treblinka armoury photo: 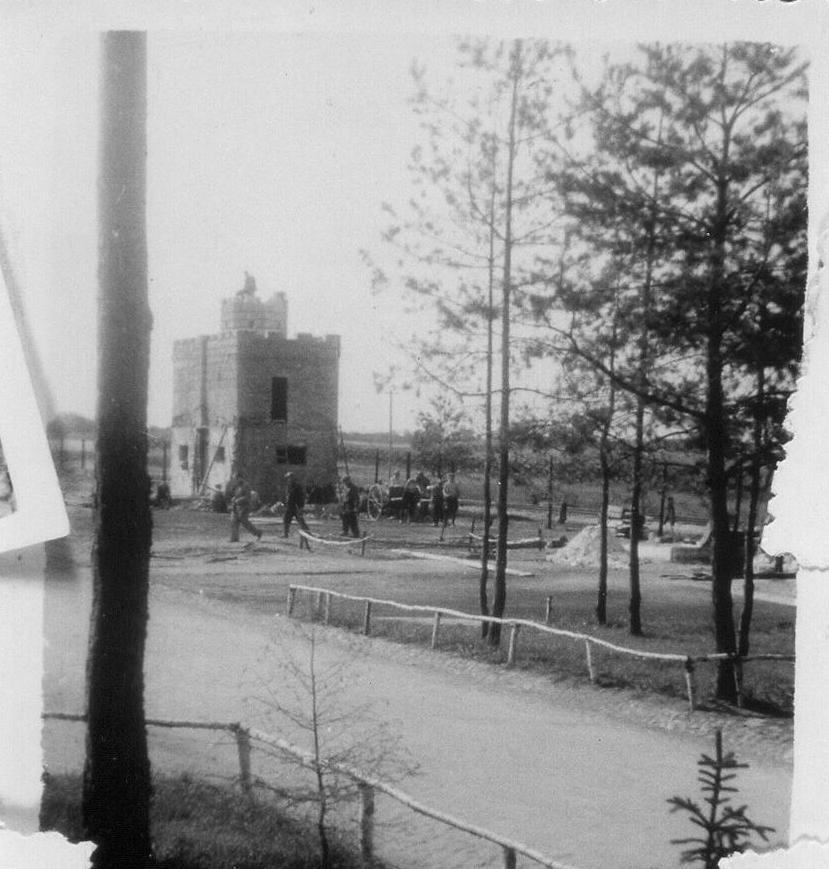 A photo allegedly depicting a work detail at Belzec: 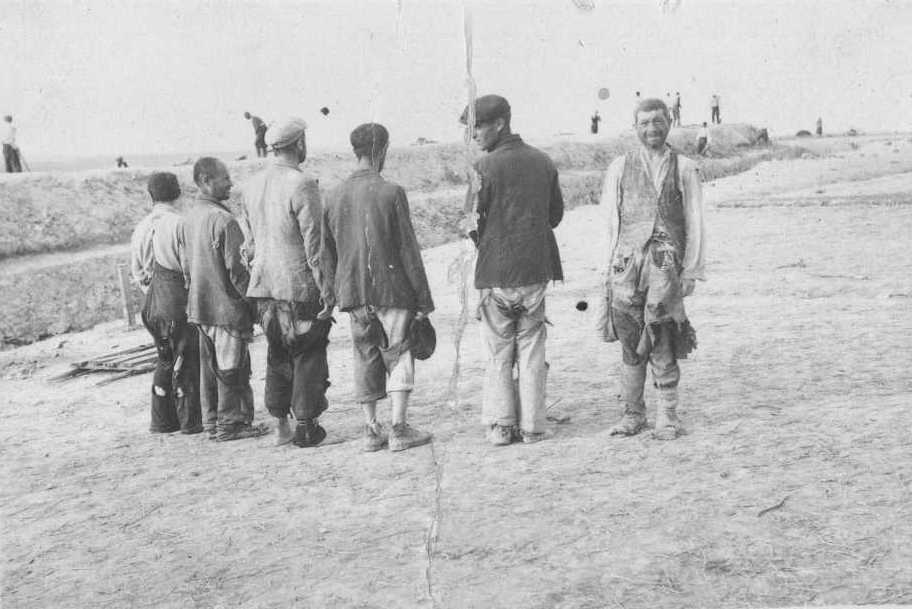 This strange picture allegedly shows the construction of Belzec but I don't know if its a photo or some kind of drawing: 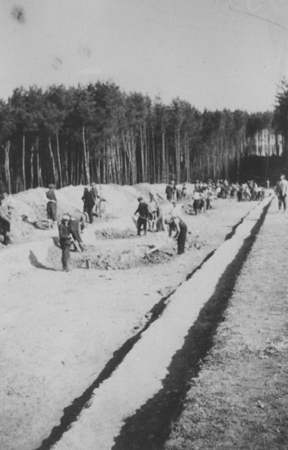 This is another supposed photo of a Belzec work detail. Where I found it was placed beside a text passage about grave pits, but the ditch dug in this photo is extremely long with no camp fence or buildings in sight. Obviously it was taken somewhere else than the Belzec camp. 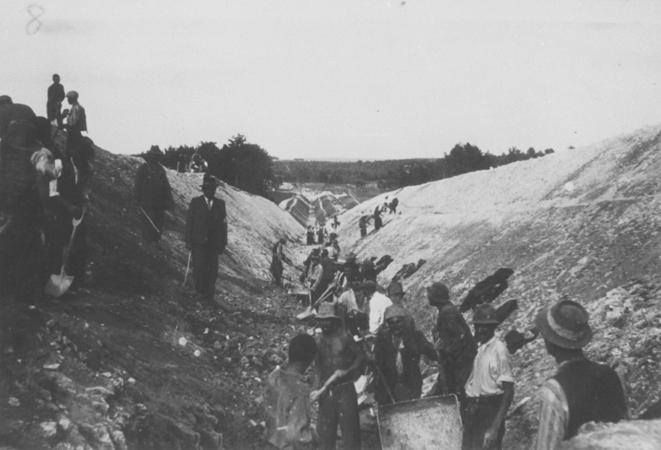 I found a real whopper today on page 42 of the book Aide aux juifs en Pologne 1939-1945 by Tatiana Bernstein and Adam Rutkowski (Editions "Pologne", Warsaw 1963). On the reverse of the title page it says that all photos and documents reproduced in it are from the Central Committee for investigation of Hitlerite crimes in Poland.

Then we are presented with this photo:

The caption states that this is the corpses of Jews asphyxiated by gas at Treblinka and put on pyres.

The contrast with the established Treblinka story is glaring.

We are told that thousands of corpses, naked corpses, were cremated at one time, on constructions made of concrete posts and railway rail.

The photo shows a meagre pyre maybe 6x2x1 meter. There are 4-5 corpses (or people posing as corpses) and enough firewood to carbonize the outer parts of the bodies, not more. We see no "roast". The bodies are wearing clothes.

The committee and the writers of the books had more than a decade to find authentic photo evidence for the alleged Treblinka mass murder among all the archives they undoubtedly had access to. But they chose a blatantly fraudulent photo. So blatantly fraudulent in fact that no-one has dared to use it since (at least to my knowledge).
Top

This photo supposedly shows the inside of a gasvan

Well it could be taken inside a van, or inside some shack or wherever, but it does not show anything which would make one conclude that one is looking at the inside of a Saurer van rebuilt for homicidal purposes.
Top

Yes, the photo of the bodies mixed with wood.

It's hard to build a fire with just dry wood, let alone how we see this configuration. That's why people use newspaper on the bottom, because you almost can't even do it without newspaper.

Nice point Laurentz about their clothes on, about the grill not being there, etc.
Top

Good evenin. Let me introduce myself in 2 word:My name is Jerzy (in Polish) ,George or Georg in others.
I will be glad to support you with pictures of holo-nonsense from my collection but first about the pictures above.
To me they look like the same people taken from the front and from the back.
NOTHING at all suggest that it could be Belzec,Treblinka or any other place on earth.
In regard to one of those 'Gas -van picture' let me tell you: that fellow in uniform is wearing Polish unifom from WWII .Those uniforms were common for Polish army created by Stalin from Polish prisoners in Gulag.

I do remember some of them very well. As a child I was very often "GASSED" with this mobile cinema theatre in my grand mother village.

Jerzy Ulicki-Rek wrote:In regard to one of those 'Gas -van picture' let me tell you: that fellow in uniform is wearing Polish unifom from WWII .Those uniforms were common for Polish army created by Stalin from Polish prisoners in Gulag.

Uniform? You mean the one worn by the guard in the back of the photo here??

http://www.zchor.org/VAN.JPG
I'm talking about this masterpiece.
From my collection:

Jerzy Ulicki-Rek wrote:http://www.zchor.org/VAN.JPG
I'm talking about this masterpiece.
From my collection:


Isn't that an American helmet the spectator is wearing?!
Top

Without a doubt a GI helmet.

I have not seen this photo before. Has this really been attributed to an Aktion Reinhardt camp? I doubt it.
Top

I do not think the holo-bulshit makres have that much guts to suggest something like that.
At least not yet.
But-concidering the shortage of arguments,who knows

This American soldier is overseeing the "mass grave"
So far I been told 1001 tales from holo-hight including similiar number of ways to kil jewish children.
Shooting targets,icy cold river baths , smashing against varoius hard obiects.
But in here is another prime example of german's cruelty :this "corpse" is carefully laid on the pillow.
Since few years I did collect and shared my collection ,translated from english and german language with young Poles via "polish " websites.
On some of them the "Holocaustic myth" (from "caustic soda"- "holocaustic"-eating away the logic and common sense) was removed almost imidiatelly.On some lasted longer.
But the collection of holo-crap I did maneged to assemble -reaminded and stays with me for future use.
If You need plenty of crap go to www.mazal.org.Magic.
99,9% of holo-nonsens I do have comes from the jewish sources like mazal.
Magic.
Jerzy
Top

Jerzy Ulicki-Rek wrote:If You need plenty of crap go to www.mazal.org.Magic.
99,9% of holo-nonsens I do have comes from the jewish sources like mazal.
Magic.
Jerzy

Not to wander OT but Harvey Mazal is indeed a fraud. Among other things, he presents a photo of a Soviet standing behind a ventilation shaft on the roof of the laundry drying facility in Majdanek as a picture of a genuine Zyklon B insertion hatch!

I have not seen this photo before. Has this really been attributed to an Aktion Reinhardt camp? I doubt it.

They usually don't, at least not directly. The technique they most commonly use works as follows. Make a claim and quote from "testimony". Then add some pictures to the scenery. The reader/listener/viewer then automatically makes a connection between what is presented even if there is no reason for connecting these items causally. I saw this associative shocking technique being used in education, museums, articles, "documentaries" (shockumentaries?) and noticed it in debates.

The trick is to make people believe that they are drawing their own conclusions and of course they are to intelligent to be "brainwashed" by something like that. The targets then believe that there is lots of evidence for the Holocaust and that "everybody denying is either a fool or malicious". It is however pretty obvious that psychological techniques are being used that are manipulative to the core. What I just mentioned are just a few examples of the tricks being used. There are many more and one just has to browse through the products of the Holocaust industry. And that is what it cuts down to: The "Holocaust" makes a good study in social psychology and the induction of believes.
Top

From one of mmy holo-caustic beauties comes this gem:
"Child.A victim of Arrow Crose (hungerian fascist"

Did You hear about the GAS CHAMBERS IN DENNMARK ?

On may blog (www.polskawalczaca.blogspot.com) I do have the info in polish and english.
Here the english version:
Read this crap:


Remarkable Nonsense about the Holocaust

HARLAN -- "Every minute was a triumph for me to be alive," Judy Meisel told 150 wide-eyed freshmen at Harlan Community High School Thursday.

Meisel, a survivor of the Nazi death camps, spoke to students in Harlan, Audubon and Elk Horn-Kimballton last week. Her visit was sponsored by The Danish Immigrant Museum.

Meisel related her experiences and answered questions after students watched her documentary film, Tak for Alt, meaning Thanks for Everything. The film describes her experiences during World War II, and her eventual arrival in Denmark during the spring of 1945. [...] She was taken into custody and placed in the concentration camp, forced into slave labor at the age of 12. [...] One of her scariest moments was watching her mother taken to the gas chamber. When she visited the same chamber years later, you could still see the fingernails in the walls of the chamber, she said.

No wonder no one has been able to find any evidence of a Nazi gas chamber: Everyone has been looking in Poland! "
Jerzy
Top