MAN who claims accounts of the Holocaust are "exaggerated" and describes Anne Frank's diary as "evil" has been convicted of putting articles on the internet that could stir up race hate.
A jury at Leeds Crown Court yesterday found Simon Sheppard, 51, guilty of nine counts of publishing racially inflammatory written material on his website between March 2005 and April 2006. The court heard Sheppard's website attracts 4,000 visitors a day.

Four of the articles were penned by Stephen Whittle, 41, who was yesterday convicted of four counts of publishing racially inflammatory written material.

The others included a cartoon by the American cartoonist Robert Crumb and an article written during the 1960s by the leader of the American Nazi Party, George Lincoln Rockwell.

Prosecutor Jonathan Sandiford told the jury that Sheppard and Whittle were a pair of racists who held what they may regard as fairly extreme views about people who were Jewish, black, Asian, Chinese, Indian and, in reality, anyone who wasn't white.

"People in this country are entitled to be racist and they are entitled to hold unpleasant points of view, but what they aren't entitled to do is publish or distribute written material which is insulting, threatening or abusive and is intended to stir up racial hatred or is likely to do so."

Both Sheppard, of Brook Street, Selby, and Whittle, of Avenham Lane, Preston, told the jury that the articles were an attempt to "satirise" political correctness.

The hearing will enter its seventh week on Monday, when the jury of six men and five women return to court to resume deliberations on further charges.

Sheppard is awaiting verdicts on nine charges relating to the publication, possession and distribution of written material which could stir up racial hatred.


I personally have no time for these minnows in terms of many of their views and the organisation in which they represent but this article is very significant in the heavy emphasis placed upon holocaust revisionism in arriving at the verdict and moreover that this represents a milestone case in which for the first time British authors are being prosecuted by the British authorities for their online writings via an American server.

Is it this Simon Sheppard?

Hektor wrote:Is it this Simon Sheppard?

Or actually go right here, then you will know:
http://www.heretical.com/holofun/shoah1.html

Don't forget to read all pages.
I must be a mushroom - because everyone keeps me in the dark and feeds me with lots of bullshit.
Top

MAN who claims accounts of the Holocaust are "exaggerated" and describes Anne Frank's diary as "evil" has been convicted of putting articles on the internet that could stir up race hate.

His claims are true, except perhaps of the Anne Frank diary - although it is certainly used to exert evil in more ways than one: such as using it to brainwash people and to paint the Germans in a picture of gory guilt.
It is also unclear whether or not Anne Frank even wrote most of the diary acclaimed to her name.
As for stirring up "race hate", I suppose the writer of the trash article classifies the Jews as a race: that is untrue. They are a heavily mixed breed and should merely be considered to be a ethnic group and certainly not a race. The only uniqueness of the Jews insofar as race is concerned is how widely they are mixed.

I don't see how any of it should be classified as "hate". But when it comes to the holiest of all, the supposed extermination of the Jew, every bit of dissent is labelled "hate".

According to the latest report they are apparently at the Los Angeles airport seeking asylum in the USA.

Check out the Link:

According to the latest report they are apparently at the Los Angeles airport seeking asylum in the USA.

Check out the Link:

Yes, it's a good and brave publicity move to put in an application for political asylum in America. Nothing they placed on that server falls afoul of American constitutional tradition. No doubt they'll conjure up some Rudolf-esque legal travesity to have them expelled and the whole gesture maybe for naught if the British national media's failure to pick up on this continues..
Top

An update on this:

THE 'HERETICAL 2' CLAIM POLITICAL ASYLUM IN THE USA!

Contrary to reports that Simon Sheppard and Steve Whittle had jumped bail to live on a beach in Thailand, the truth has now emerged as to their exact whereabouts:

Sheppard and Whittle are being held by the INS (the American Immigration and Naturalization Service) at LAX (Los Angeles International Airport) after claiming political asylum on arrival. Help from local comrades is being organised in terms of solidarity, and legal advice.

For the sake of their reputations, please point out on various news groups and forums that Sheppard and Whittle have made a carefully calculated decision to claim asylum in the USA after receiving written confirmation from the US Courts that their writings (which are posted on a web server in Torrance, California and have never appeared in hard copy form) are perfectly legal under American law, and protected in the highest degree by the First Amendment.

The Crown Court in Leeds has asserted an unprecedented long arm jurisdiction to take cognizance of acts done in a foreign country Sheppard and Whittle may be eccentric, but they are not cowards. The rationale of their escape was to set a precedent for revisionists and others persecuted under oppressive laws, and cause the maximum embarrassment to the British government by what will inevitably be a long drawn out and hard fought case in the USA.

We should add that the Heretical Two voluntarily surrendered on arrival, so as not to enter the USA under false pretences, and made a deliberate decision to go to the country where their writings had been published and make a political protest, rather than luxuriate on a beach in Thailand.

They won't get political asylum even though they should. I guarantee you they will be deported and charged, just like Zundel and Rudolf were. There are some very angry Jews with positions in government which will assure it.
Top

They have a series of immigration/asylum hearings coming up in March. Their legal representative is the same guy who defended Ernst Zundel... Bruce Leichty. I don't know if that's good or bad.
Top

Citizenfitz wrote:They have a series of immigration/asylum hearings coming up in March. Their legal representative is the same guy who defended Ernst Zundel... Bruce Leichty. I don't know if that's good or bad.

Those who have disproportionate influence and power in the United States (yet angrily deny it) will see to it that these men are gotten rid of. They should have gone to Mexico or somewhere.
Top

Things aren't looking too good for the heretical duo. Still, we can and should apply some pressure to the system on their behalf.
Top

Citizenfitz wrote:They have a series of immigration/asylum hearings coming up in March. Their legal representative is the same guy who defended Ernst Zundel... Bruce Leichty. I don't know if that's good or bad.

Bruce Leichty got his own web site:
https://www.goodinformation.org/
Top

Bruce Leichty got his own web site:
https://www.goodinformation.org/

According to this article https://themennonite.org/opinion/mennon ... holocaust/

My first thought was this: Ethnic Mennonites went from participating in the Holocaust, to helping Palestinian refugees, to denouncing Israeli occupation.

The comments made about me by Lisa Schirch, someone who has spoken with me, are both inaccurate and libelous. I am not anti-semitic nor am I a “Holocaust denier.” I did not ask any offensive questions at the conference. I merely sought to refer conference-goers to an event that was sponsored by Good Information Advocates and RighteousJews.org, featuring two pro-Palestinian activists; it was titled, “Two Revisionist Jews Consider the Holocaust.” For that, conference organizers purported to revoke my paid registrant status, told me I could no longer be on the campus, and had me arrested when I peaceably asserted out my authorization to be at the conference. No Mennonite media outlet has dared report this; however, a full account can be read at http://www.goodinformation.org.

That comment above should read that Lisa Schirch has “never” spoken with me. I have, however, been critical of Ms. Schirch for smuggling uncritical leftist politics into the church by way of her position with EMU; I believe that as one of the framers of the Israel-Palestine resolution that was passed at Orlando in 2017, perhaps influenced by her Jewish husband and his circle, she was the person most responsible for insisting that American Mennonites unnecessarily acknowledge guilt for the Holocaust.

[Sheppard] was released on licence after serving less than half his sentence to a bail hostel on 17 May 2011 and was banned from accessing the Internet. He was rearrested in January 2013 for breach of his licence conditions and returned to prison in Northallerton for a further three months.

In June 2018, Sheppard was convicted of racist harassment of a neighbour. He was sentenced to nine months in prison and given a five-year Criminal Behaviour Order.

So, as of this writing, Sheppard sits in prison.

His website, http://www.Heretical.com, stands defiantly online, as it has for the past twenty years with relatively few interruptions. I understand it is hosted by a friendly party in the USA. Sheppard remains a Holocaust revisionist, even though he has every incentive to assert he has "had an awakening" and now believes in the Holocaust...to get his tormentors off his back. But, like Luther at the Diet of Worms, Sheppard still refuses to recant.

Here is a picture that ran in the British press in 2009 when he was deported from the USA: 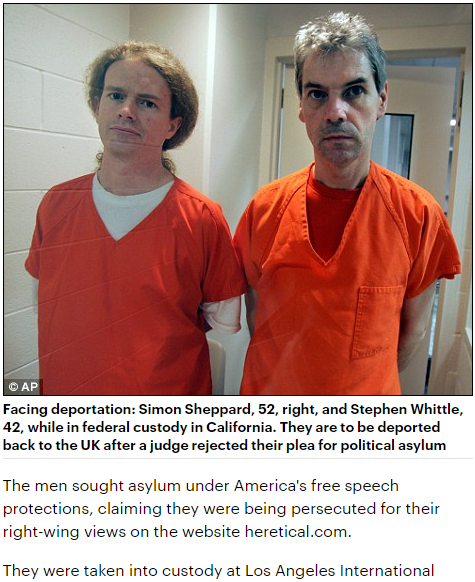 Here is what his website masthead says as of this writing on his latest incarceration:

On Tuesday 19th June [2018], Simon Sheppard was sentenced to nine months imprisonment at York Crown Court. He had been facing two charges of "racially aggravated harassment" against a neighbour to whom he had never actually spoken to directly.

The jury acquitted on the first charge, but delivered a guilty verdict on the second. Simon has now been been moved to Humber Prison where he is widely known as the ‘mad scientist’.

He would like letters from supporters. Please write to:

Anyone wishing to provide finacial help should make a PayPal payment to: [email protected]