$$$$$HOLOCAUST SHOPPING$$$$$
Taking their que from eBay, a new auction site has opened, what do they sell you wonder? Why items from the holocaust. 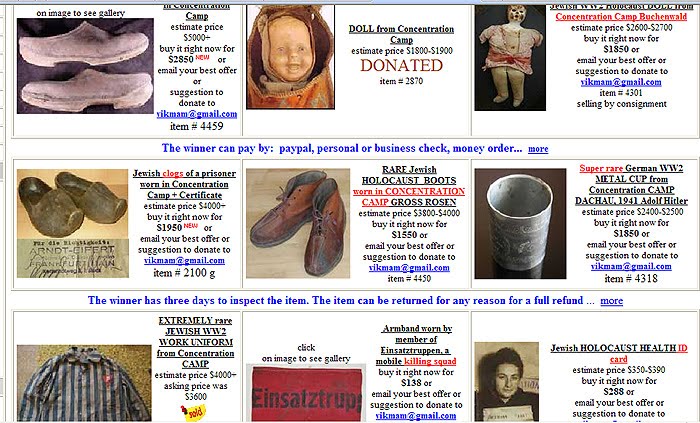 OMG heads will roll for this one!! People are selling items from the holocaust for profit, including (gross!! and yuck!!) soap made of "people" Ewe!!

That's it, I'm switching to shower gel!! AND I'll need some brain bleach to get that image outta mi head!!"

So I expect the ADL and all worldwide Jewish groups to come out swinging on this immediately. OUTRAGE, OUTRAGE, OUTRAGE!!!! I expect heads to roll, laws to be passed, people to be sued and jailed, drawn and quartered, slandered and called "Anti-Semitic"

Oooops, that can't happen because Jewish people are doing the selling!! In fact, they have created several "auction" websites, much like eBay, no less, for example like THIS one http://www.jewishmemory.info/ , to "sell their wares." (take a look at the prices!) And, they are making a tidy wee profit off their fellow Jews, the dead ones that is. Much more after this:

A thriving trade in Holocaust artefacts from the millions of Jews killed by the Nazis is outraging Jewish groups worldwide(not really!).
http://www.dailymail.co.uk/news/worldne ... ds-newsxml

Internet sales of the yellow stars Jews were forced to wear, dolls allegedly cuddled by children in death camps like Auschwitz and the paper money used in ghettos in Poland are part of the latest craze for militaria collectors.

Earlier this month, a curiosity shop in Montreal, Canada, was condemned by Jewish groups for selling a bar of soap allegedly made from the fat of Holocaust victims.

The beige bar of soap, inscribed with a swastika, was displayed in a glass case with a card that said 'Poland 1940'.

The store owner, Abraham Botines - himself Jewish - claimed the soap was 'made out of people... the fat of people' and said he believed it was important to display and sell such items to 'remember the Holocaust'(And to make a profit off it!)

The Jewish Memory website, based in the U.S., said it collects from Germany, Poland and other European countries to offer Holocaust artefacts for sale.

It states: 'Until now there is no place where there are gathered different samples of badges, armbands, uniforms, patches worn during World War Two in concentration camps and Jewish ghettos.

'If you have some items of that period please do not hesitate to send us pictures and description of the items you have.(So we can make some $$$$$$$$)

'A very sad reminder of a very sad time, but nevertheless a real piece of Jewish history to teach your children or for the avid collector of these items.

'The items from this period of history help people to remember those horrible times and never repeat them again.'(And they help to line my big fat pockets with cold hard cash)

The site currently has an 'extremely rare Jewish Holocaust wood doll from concentration camp Auschwitz' for sale at $2,500 (£1,700).

It also offers a pair of wooden clogs allegedly worn by a prisoner at the Buchenwald concentration camp in Germany for $5,000 (£3,400), several cloth yellow stars and another wooden doll allegedly from a child at Buchenwald.

Another website, Historama, operates out of Israel and currently offers ghetto work permits, arrest warrants and money. Most of the ghetto Jews in occupied Poland were killed.

NOT JEWISH? Never mind they also have sections which cover other non-Jewish people murdered in the holocaust. You know like Gay people, gypsies, prostitutes etc, see here: 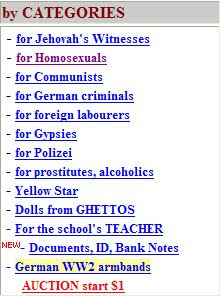 AND YOU CAN GET A DISCOUNT, JUST IN TIME FOR MEMORIAL DAY!!

AND THEY OFFER HANDY PAYMENT OPTIONS AS WELL:

Seriously, it's really hard to sell the sacredness of the "holocaust" when Jews themselves are profiting on it. Israel has the cheek to slam Ahmadinejad over holocaust "comments", but he's not profiting from it, they are! And to think, one of these sites is operating inside Israel!! Imagine if it were,Oh let's say Iran. Now, tell me again how sacred the "holocaust" is to Jews? Not as sacred as money.....................

You simply cannot make stuff like this up,
Halo
Top

I must say this is pretty atrocius.

Well, how do you know that site is "Jewish"? The domain is registered to a certain Viktor Vasenkov from Ukraine. He also owns gunbid.info selling German and ua-ru.com selling Russian military objects. Looks to me that person is trying to make money with old stuff that others may consider worth to collect. And in fact, since jewishmemory.info is likely mostly attracted by Jewish people, he seems to try to take money FROM Jews. Holocaust industry reversed.
Top

A few years ago, I bought some Buchenwald script and Auschwitz script off of the internet. It seemed like a good idea to use to blunt the automatic comebacks of believers who think Auschwitz had ovens and only ovens.

The Buchenwald script today is listing for $450 and I cannot find any Auschwitz script.

I placed these items in a hard plastic covering and carry them in my suitcase when travelling. Anytime the topic of Holocaust comes up, I will ask ," did you know the detainees at Auschwitz were paid for their work"? 99% of people will assume you are lying or making the story up. I then show them the script.
The reactions are all over the map, but the point is, they have just seen proof of a NEWLY REVEALED ( to them ) holocaust fact, which nobody ever told them about. And to top it off, this fact was told to them by a revisionist. Makes your side of the story much more credible going forward.

One of the best $200 investments I ever made. It is so powerful and creates instant credibility for the revisionist position.
Last edited by vincentferrer on Tue May 25, 2010 4:09 pm, edited 2 times in total.
The very word holocaust is a pejorative to every German citizen. There was no holocaust,
just lies from the abandoned race.
Top

Mind you, its a bit like the people who collect the artifacts of crime and have their own personal 'black museums', but if you believe the traditional 'holocaust' narrative then it's pretty sick. If you don't, then it's rather, well... bemusing.
Top

Humm. Nothing out of the ordinary. PB&J with a bag of chips, fruit, a cookie, and bottled water is $10.00 at USHMM!

Your best bet is the wiener stand just outside the House of Horrors: It's not clear whether they're kosher or not.
Top

Hans wrote:Well, how do you know that site is "Jewish"? The domain is registered to a certain Viktor Vasenkov from Ukraine. He also owns gunbid.info selling German and ua-ru.com selling Russian military objects. Looks to me that person is trying to make money with old stuff that others may consider worth to collect. And in fact, since jewishmemory.info is likely mostly attracted by Jewish people, he seems to try to take money FROM Jews. Holocaust industry reversed.

I was told that Mr Vasenkov hosts the domain for a German Jew by the name of Michael Peters from somewhere in the Hamburg area. I think Mr Peters is trying to make money from anyone he can.

This is disgusting. Probably hundreds of Jews employeed here in comfy jobs, with one purpose. Promote a line of crap to gullible Americans and others.

Someone should do a survey and find out how many employees are Jewish. Most likely all.
The very word holocaust is a pejorative to every German citizen. There was no holocaust,

How do they know that stuff is really from the any camp? All you have to do is find something that is 70+ years old, and claim it is from a person in the camp. It doesn't even have to be things that were made in Europe. Someone could have something from the United States, and claim it was sent to them.

Come to think of it, I may have some things from survivors of the German internment camps. I have an iPod, cell phone, and a bent key from a Prius that were all from holocaust survivors.

HelenChicago wrote:Your best bet is the wiener stand just outside the House of Horrors:

It's not clear whether they're kosher or not.

Are my eyes deceiving me, or does it not say "Hebrew National" on that umbrella?
By doubt we come to inquiry; by inquiry we come to truth.
- Peter Abelard