Whitewashing/Plastering of walls in alleged 'chambers'?

If the claim is the rooms were painted at construction, then washed with bleach in between gassings, then the paint would've been taken off by the washing process. Anyone who has seen the effects of putting bleach on painted walls has seen the paint come off, especially if this was done at the rate of the gassing claims. If the paint came off, there would be no resistance to the cyanide absorption.

If I'm incorrect, then this is why I'd like to see exactly what the claims are. We still haven't seen the detailed story of the people claiming the walls were painted and washed.
I'm going by the original post where plastering, painting, washing with bleach was referenced.

If the claim is simply that the walls were painted at construction, and there's no evidence to the claim based on the ruins, then there's no discussion to have.
Why the Holocaust Industry exists:
http://www.youtube.com/watch?v=2A81P6YGw_c
Top

The Warden wrote:If the claim is simply that the walls were painted at construction, and there's no evidence to the claim based on the ruins, then there's no discussion to have.

I'm going to have to agree. I've never heard of this being proposed, I only meant to question whether or not it had been brought up. Regardless, there were samples from areas that were never claimed to have been painted, even if the walls were, as with Sample #1 from Crema II in Rudolf's data, like Hannover mentioned.
Top

8. Coating of Walls
Prof. van Pelt states [p. 306]:
"Furthermore he [Leuchter] wrongly inferred from the ruins of crematoria 2 to 5 that the walls of the gas chambers had not been coated, […]"

Germar Rudolf:
"Though it is correct that we do not know anything about the walls of the crematoria IV and V, the walls of the alleged 'gas chambers' of the crematorium II is still today partly intact and can be investigated: The walls of this room had a plaster of cement mortar, but no paint or other coating. It must be assumed that crematorium III was built in a similar way. It is astonishing to see how Prof. van Pelt, who claims to have visited this place at least once, can spread such untruth. Or is he unaware of the fact that the expert term "coating", as referred to by Leuchter, means at least partly gas tight coating, and that plaster is without any doubt not a gas tight coating? In fact, Leuchter was talking about some water- and/or gas tight paint such as that applied to kitchen and bathroom walls today and as it can be seen on the walls of the delousing facilities in the Dachau concentration camp still today. Neither cement mortar nor lime mortar, the materials used in the crematoria and delousing facilities in Birkenau, can be called coatings."

The ceiling inside the alleged gas chamber of Krema II in Auschwitz-Birkenau: 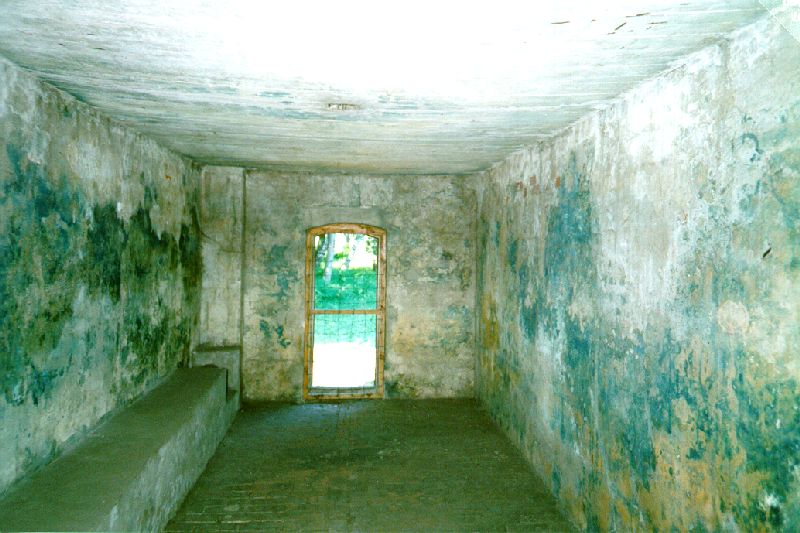 "Neither cement mortar nor lime mortar, the materials used in the crematoria and delousing facilities in Birkenau, can be called coatings."

Not to mention, if they weren't concerned enough to put a coating in the delousing chambers, you'd think they'd at least put one in the 'gas chambers' after noticing the apparent blue staining created on the DC walls by the very same cyanide that they were later supposed to be using to secretly gas Jews.
Top

Trevor, I have looked at all these pictures you link to, from the Mazal library, and I am somewhat confused by them. It appears to me that they have deliberately made no comment or conclusion about each picture. They leave it to the viewer to make their own conclusion or not as the case may be. To just show a good number of shots saying 'wooden support block for fake shower head' makes a general implication but does not stand up to scrutiny. To say 'concrete ceiling with rebar' is to leave a thought in the viewer's mind that there is something sinister about it. In fact this type of reinforcement to large areas of concrete is perfectly normal practice.

My question is do you know of educated comment made by Mazal as to the conclusions of these pictures?
'Of the four million Jews under Nazi control in WW2, six million died and alas only five million survived.'

Mazal and his website uses manipulative propaganda to promote the Holocaust industry. Revisionists will not get permission from the Auschwitz museum to go inside the Krema II and made photos so I had to use his photos to show what kind of MATERIALS there are inside the alleged gas chambers.

The captions of his photos are of course BS. There is not a shred of evidence that the wooden support blocks or whatever were used for any fake showers.

JUST ONE EXAMPLE:
"Jewish women and children from Subcarpathian Rus who have been selected for death at Auschwitz-Birkenau, walk toward the gas chambers. Photograph #77342 "

BTW, behind the Kremas , there was the so-called "Sauna" building, the main disinfection and bathing center for the camp. Waking towards the Kremas proves absolutely nothing. Most people do not know any details about the camps or the absurdities of the witness statements so it is very easy to manipulate them.
Top
Post Reply
21 posts