Just wanted to ask about the gas chamber in Ravensbruck. What do mainstream historians say about it today?
Top

I cannot claim to be super knowledgeable on the Ravensbruck camp but it was of course essentially a women only camp. The camp supposedly had a gas chamber built late in the war and was used, so they say, to eliminate or euthanise those unfit for work etc. You won't find many historians talking about it these days as it doesn't fit the accepted storyline that there were no gas chambers on German soil.

Here's a link to a web site with some of the 'witnesses' who claimed to know a thing or two. The usual technical mistakes are apparent in the statements. I did a quick google search on the camp and cannot find any reference to the gas chamber still being there. Odd that don't you think, but maybe it is and I just haven't found it yet. I am sure one or two members here will have visited the camp and may be able to add much more to my sparse comments.

http://forum.axishistory.com/viewtopic.php?t=59738
'Of the four million Jews under Nazi control in WW2, six million died and alas only five million survived.'

You won't find many historians talking about it these days as it doesn't fit the accepted storyline that there were no gas chambers on German soil.

The Industry still maintains there was a homicidal gas chamber at Sachsenhausen, Ravensbrueck (temporary one set up late), Mauthausen (now in Austria once more), Neuenngamme (prisoner cell used as a gas chamber a few times), Dachau (even Pressac & Van Pelt claim it was a gas chamber), plus half-a-dozen-or-so T4 centres.
Nazis tried to create super-soldiers, using steroids ... they sought to reanimate the dead—coffins of famous Germanic warriors were found hidden in a mine, with plans to bring them back to life at the war’s end.
- Prof. Noah Charney
Top

On Ravensbrück, Jewish 'holocaust' historian Olga Wormser-Migot remarks that there were no gas chambers at Ravensbruck:

... the declarations on the gas chamber at Ravensbrück place the beginning of its existence in Febr. 1945,
date of the arrival of those evacuated from Auschwitz, the date when the Ravensbrück detainees discovered
the existence of gas chambers at Auschwitz.

more here:
Hannover @ A pile of bodies at Ravensbruck in Oct 1944?

TheBlackRabbitofInlé wrote:The Industry still maintains there was a homicidal gas chamber at Sachsenhausen, Ravensbrueck (temporary one set up late), Mauthausen (now in Austria once more), Neuenngamme (prisoner cell used as a gas chamber a few times), Dachau (even Pressac & Van Pelt claim it was a gas chamber), plus half-a-dozen-or-so T4 centres.

Two points: We shouldn't get caught up in the 'industry' view as it often differs from that of independent historians, they may not be the same thing at all. Secondly the 'industry' is clutching at straws these days as they understand there is a convergence of skepticism on the claims of the holocaust and the growing anger towards Israel, because of its actions against Palestine and Palestinians. Israel has now made an unholy alliance with Saudi Arabia to stop Iran producing oil as a result of the Obama initiative to bring Iran back into the real world. Watch the violence against Iran grow.

On a general note why is it that these so called gas chambers on German soil in camps such as Sachsenhausen and now Ravensbrueck cannot be shown? Because they either didn't exist or were destroyed by the East German authorities on the orders of Moscow. Just take a few minutes to investigate the claimed gas chamber at Sachsenhausen. Perhaps Black Rabbit would post a link to his blog on that camp.
'Of the four million Jews under Nazi control in WW2, six million died and alas only five million survived.'

Ravensbruck gas chamber, yes, here it's a picture of it: 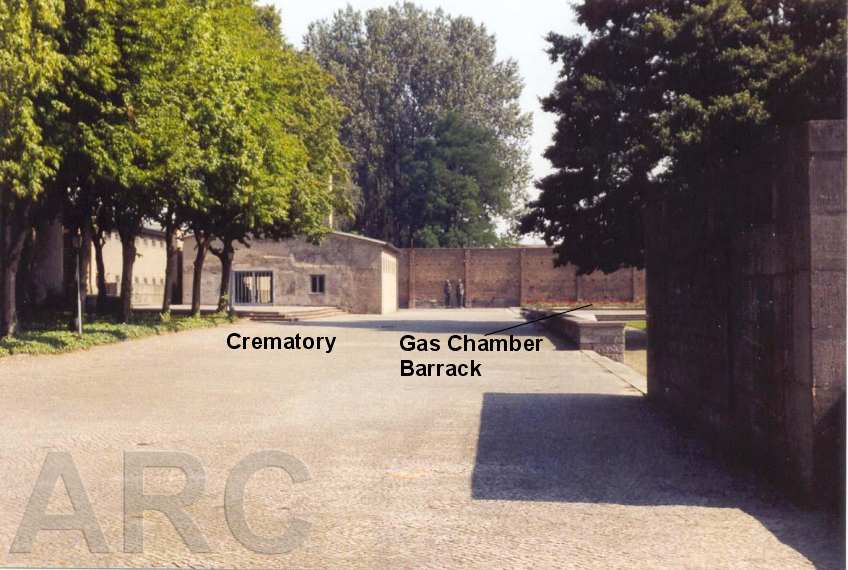 You just need a little bit of imagination and you will see it. With a small effort you can see the tight metal doors, the ventilation system, the holes at the roof, etc.

And here are some excerpts from the renown deathcamps.org:

Probabilities, no certain thing, as usual.

The construction works started in October 1944 but were delayed, probably because of a lack of material. Because of the situation at the front in late January / early February 1945 the camp authorities had to find a temporary solution for gassing purposes

Construction started, then postponed, but no blueprints, no schematics, nothing about a gas chamber.

No plans or remnants of the building are available. Therefore all facts about this real gas chamber of Ravensbrück are based on the testimonies from witnesses (SS men and former prisoners) who all agreed about type and location of the gas chamber. This provides firm evidence to support the existence of the gas chamber

How convenient... Again, the so called holocaust is built upon """witnesses""". They could have said there was a bone crusher machine with the shape of an swastika crushing bones, and since there are not remains, it could be true!

Now, how can anyone believe that only testimonies can provide "firm evidence" to support the existence of gas chambers?

One could think, well, if all the "witnesses" claim the same things, it could be actually true, but....

The exact procedure of the gassings cannot be reconstructed with absolute certainty because of the variance in the reports of the different witnesses.

Again, the gas chamber fairy tales do not seem to need scientific proof, not even consistency

In the night of the 23 April 1945 the barrack was blown up by the SS, according to some witnesses. Therefore no important traces remained after a few days when the camp was liberated by the Red Army. In contrary other witnesses stated that they still had seen the barrack shortly after the end of the war.

We don't know if the foundations of the barrack are still there: The site where the barrack was located, was converted into a DDR memorial after the war. It became a part of the graves field at the camp wall. An archeological inspection to locate the exact site of the gas chamber would disrupt the today’s graves. A positive result would not be predictable anyway.

So, you can blow up a gas chamber a leave no possible trace of it? What is it the SS used to blow up things, wormholes?
Then they try to infere that an inspection would probably give results, but it is now holy ground, it cannot be disrupted....

It gets easier everyday...
If Human Soap rumour was fake, why can´t all the other absurd claims be too??
Top
Post Reply
7 posts • Page 1 of 1