So how many Jews died?

The jewish revisionist Roger Dommergue estimated less than 200,000 jews to have died in the camps in his letter to Steven Spielberg.

You know it as well as I do. It is all the more so as we know that 6.000.000 is gross exaggeration and that the Zyclon-B gas chambers are a technical impossibility. (See Degesh Trial in 1949). In fact 150,000 or 200,000 Jews died in the German camps of typhus or starvation. Many others died but as fighters against Germany to which we, the Jews, had declared war in 1933! ( Hitler was allergic to the hegemony of gold and of the dollar: so he could give work to six million unemployed, before the functioning of German armament factories!).

dont we also have the international red cross report as evidence that states something in the 200k-400k range from all causes?
Top

"dont we also have the international red cross report as evidence that states something in the 200k-400k range from all causes?"

I believe that was all Nationalities, not just Jews.
Maybe, just maybe, they believe what they are telling you about the 'holocaust', but maybe, just maybe, their contempt for your intelligence and your character is beyond anything you could ever have imagined. -- Bradley Smith
Top

Walter Sanning (pen name) seems to have estimated some 300,000 jewish camp deaths by some complex statistical means. Or between 150,00 and 420,000 jews "missing" at the end of the war, the large uncertainty due of the lack of trustworthy data.

Those who died in Auschwitz and Theresienstadt represent a little less than half the total loss in all the German concentration camps as far as the identified Jews are concerned. As for the Jewish population in general, the total number of camp deaths would be contained within Sanning's category "Jews missing in the German sphere of influence." This number of "missing" turns out to be 304,000, according to Sanning's primary method of calculating. As a check, Sanning has used another method as well. This secondary calculation results in a number of 330,000 missing out of a "basic" number of 2,738,000 (within a somewhat narrower sphere of influence).......Therefore, what Sanning really has achieved is only to show that the number of missing Jews at the end of the war in the German sphere must have been between, say, 150,000 and 500,000.....there would be some 420,000 "missing" from a statistical point of view.

Here is one document from the arolsen archive and the numbers are made by the Red Cross... 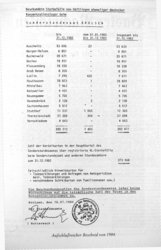 I have looked at both these Arolsen IRC records (the 1979 record is shown below) and would note that the main difference, apart from the individual camp numbers going up slightly, is the removal from the later document of some 41,748 deaths under the heading of Abteilung 1.

This is what Wikipedia says about Abteilung:

The camp registrar handled the registration of prisoners when they were admitted and when they left, whether by release, transfer, escape or death.[1] Inmate files were created, portrait photos made, physical description noted, brief details about the prisoner's life and fingerprints were filed.

The Politische Abteilung also handled the police work of the camps, again dividing up this work into specific subdivisions. The monitoring service prepared prisoner identification papers, another handled investigations and interrogations and a third handled prisoner surveillance.[1] This included the fight against clandestine camp resistance groups, the prevention of escape. The department was known for its harsh interrogations, torture and executions and SS members of this department were feared by prisoners

Can anyone shine a little more light on this Gestapo unit and why the huge number of deaths went missing or actually looks like they were spread across the whole, as the totals are almost identical? Is the Abteilung mentioned on the 1979 report even the same thing as covered in the Wikipedia info? 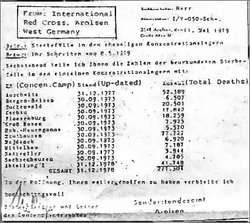 Landulf wrote:Here is one document from the arolsen archive and the numbers are made by the Red Cross...

the phrasing in this document could sadly be missused by holohoaxers i think.

It talks of "documented" death toll.

Iam sure they will go for "well, they didnt document the millions they cremated."
Top

The dates seem problematic to me. A lot of time for manipulation one would think.
B.
Revisionists are just the messengers, the impossibility of the "Holocaust" narrative is the message.
Top

Mr Rudolf compares Benz's and Sanning's books on the death tolls in a paper.