Another knockout punch to the scam otherwise referred to as the 'holocaust'.

Forget the appeals to emotion, forget the irrationality of the narrative, forget the Pavlovian responses by the usual enemies of free speech, forget the drama; science has no room for such reactions.

The 'holocaust' storyline is simply impossible.

Have a look, comments invited.

The Chemistry of Auschwitz
Video Documentary
By Germar Rudolf
Published: 2017-06-15

While respecting the victims, whether of foul play or of circumstance, this documentary nonetheless tries to conduct Auschwitz research on the basis of the forensic sciences, where material traces of the crime and their interpretation reign supreme. Although it is generally agreed that no autopsy of any victim has ever been performed, most of the claimed crime scenes – the chemical slaughterhouses called gas chambers – are still accessible to forensic examination to a greater or lesser degree. So, how did these gas chambers of Auschwitz look like? How did they operate? What were they used for? In addition, the infamous Zyklon B can also be examined. What exactly hides behind this ominous name? How does it kill? And what effect has it on masonry? Does it leave traces that can be found still today?

These and many other questions are thoroughly examined in this documentary. The horror of Auschwitz is meticulously dissected, and thus, for the first time, it really becomes comprehensible.

This video documentary accompanies the book of the same title, which is Volume 2 of the series "Holocaust Handbooks." http://holocausthandbooks.com/index.php?page_id=2

Please consider supporting the creator of this documentary for his efforts and for the injustices he has suffered (he was sentenced to 14 months’ imprisonment for the 1993 German edition of the book accompanying this video) by making a donation. Details can be found on his website. http://germarrudolf.com/donations-spenden/

It seems this a video version of the Rudolf Report.

i.e., summarized by this table (attached):

Sannhet wrote:It seems this a video version of the Rudolf Report.

Listening right now. It's based on Rudolf Report, but also some other findings. E.g. Rudolf gives some backgrounds on delousing, available facilities in the camp, just to make the arguments more understandable (bigger picture). I think the lack of background knowledge is to some extent a huge obstacle for people following our logic and arguments. However I think we should also give plausible scenarios on how the genocidal gassing myth emerged. Obviously people have mistaken info (rumors) about delouslng and disease prevention such as showering, shaving, gassing clothes, cremation etc. and rearranged the bits to create a extermination by gas narrative from this. That's what the psychological warriors and Allied propagandists used and fuel to provide the pretext for the Holocaust storyline as we know it today.
Top

An excellent video.
Scientifically accurate and well presented.
Even a moderately educated audience will find it very convincing.
But how are you going to get hundreds of thousands of people to watch it. That is what is required to expose the Holohoax, audiences of hundreds of thousands.

What does cyanide without iron-cyanide mean? What was the official explanation of Markiewicz et al. as to not test for total cyanide?
Top

What does cyanide without iron-cyanide mean? What was the official explanation of Markiewicz et al. as to not test for total cyanide?

The official excuse is that they didn't understand how and why Prussian Blue did form in building walls.

...That the deniers should measure more cyanides in samples containing the blue-staining is not surprising, assuming the blue-staining is indeed composed of iron blue compounds such as "Prussian blue" as claimed by Leuchter and Rudolf. Markiewicz et. al., were careful to discriminate against such iron blue compounds in theri comparisons of cyanide levels. The reason, quite simply, is that the origin of the blue-staining is not well understood and there is no reason to assume that the formation of such compounds necessarily results whenever building materials are exposed to HCN....
http://www.nizkor.org/features/denial-o ... ensic.html

Yeah, "origin is not well understood" ... So I, exclude that from my research. Also, "HCN exposure will not necessary lead to Prussian Blue formation". I agree, especially when conditions for Prussian Blue formation aren't as ideal as they were in the morgues (postulated gas chambers) or delousing chambers. Some building materials simply don't have elements or molecules present with whom HCN will react - Think of wood, stainless steel etc.

The question coming up with me is how did they actually knew -CN detected was from long-lasting compounds? How did the meagerly detected presence indicate origin from the 1940s - prior to 1945 that is? How did they decide that those tiny results weren't just detection mistakes?

Another excuse is the supposition that Prussian Blue did stem from paint pigments on the walls?

...J. Bailer (1) writes in the collective work "Amoklauf gegen
die Wirklichkeit" that the formation of Prussian blue in
bricks is simply improbable; however, he takes into
consideration the possibility that the walls of the
delousing room were coated with this dye as a paint. It
should be added that this blue coloration does not appear on
the walls of all the delousing rooms.

We decided therefore to determine the cyanide ions using a
method that does not induce the breakdown of the composed
ferrum cyanide complex (this is the blue under discussion)
and which fact we had tested before on an appropriate
standard sample...
http://www.nizkor.org/ftp.cgi/orgs/poli ... ter.report

Again, what did they do to substantiate that?

The debate around Leuchter-Rudolf-Markiewicz never came to the real issues... In fact if you read Markiewicz carefully, you notice the ad hominems and the real reason for neglecting Prussian Blue content in samples: The discrepancy between Krema morgues and delousing chambers is all too obvious.

Ask yourself why Markiewicz et al. were never translated into German for publishing in German speaking countries. The exposure this would have gotten would have been counterproductive, since it also would have reached a lot of scientifically proficient people that would have noticed the bluff they'd undertook. Rather jail "deniers" and avoid any debate.
Top

One thing that is interesting to me is the lack of uniformity of the PB. In the picture below showing a delousing chamber in Auschwitz-Birkenau, you can see how the concrete surrounding the bricks in the wall has discolored more than the area of the wall where the bricks themselves are. Also, upper parts of the wall are more likely to be colored than close to ground level which makes sense because HCN is lighter than air. 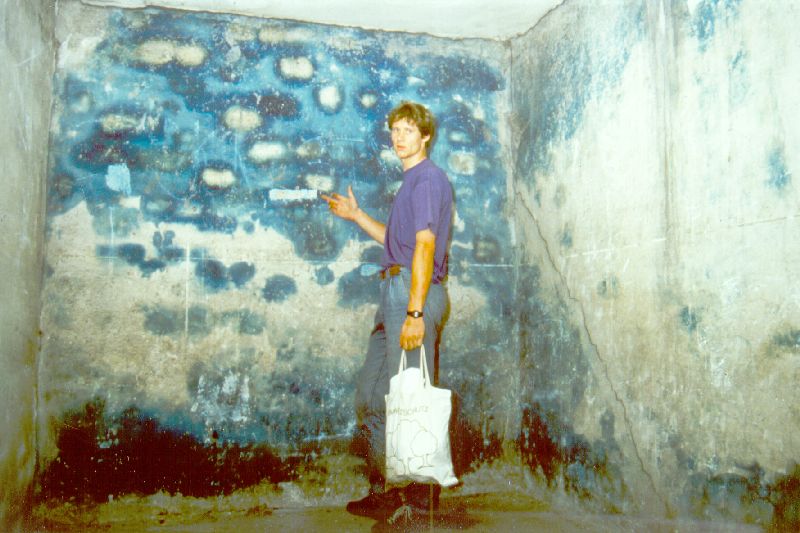 I assume this lack of uniformity is because of the PH levels and other chemical properties of the plaster itself, although we have to keep in mind that because of the DEGESCH system in the delousing chambers, the air was in circulation rather than still, and therefore the distribution of HCN in this chamber was not homogenous but rather concentrating in the direction the blower was blowing.
Top
Post Reply
7 posts • Page 1 of 1