WINSTON CHURCHILL WAS A SECRET JEW.

WINSTON CHURCHILL WAS A SECRET JEW.

Winston Churchill was a "secret Jew." This was admitted in the Jerusalem Post, Jan.18, 1993, where editorial columnist Moshe Kohn wrote:

This explains his approach to Hitler.

Funny, that a Jew should never mention the holocaust in his wrtings or speeches.
Top

Churchill is curious because he said such things as this:

From the days of the Spartacus Weishaupt to Marx, Trotzky, Bela Kun, Rosa Luxembourg and Emma Goldmann, there is a worldwide conspiracy busy to destroy our civilization, and to change our society on the basis of unhampered developments of ugly greed, and an impossible dream of equality of all.
This conspiracy with its relentless undermining of every existing institution was able to engage a gang of unscrupulous people from the underworld of the larger cities of Europe and America to take over Russia, and make itself masters of this large empire. It is not necessary to overestimate the role which these godless Jews played in the establishment of Bolshevism.

a letter to David Irving about Churchill & the ‘holocaust’ story:

TO what extent, if any, did Churchill mention the Holocaust in his WWII volumes? I know that the word itself didn't exist when he was writing, but how often, and in what depth, did he talk about the gas chambers and the genocide of the Jews?
Given the respect Churchill has as a chronicler of the war, the fact that he was at the center of everything happening at that time, and finally that the Holocaust was without question the most poignant fact of the era, I would expect his treatment to have been comprehensive. I have read some of his volumes, though not all, and I was not focused on the questions I have just asked.
H.M.

THE answer is, not once. His treatment of the whole Jewish question is rather odd, and Chaim Weizmann wrote to him after the war to lament this fact. The Anglo-Jewish community had provided him with substantial material resources in the 1930s, and Weizmann indicated that he considered Churchill's attitude to be poor recompense indeed. Churchill made no response to the letter (which I have from the Weizmann archives) so far as I know.


- Hannover
If it can't happen as alleged, then it didn't.
Top

One has to explain the word "sayanim" to the non jewish people,
ie. the "goyim". 'Sayanim' are the 'helpers' , jewish or not.
If you have ever wondered, how come the Mossad has so much power,
this is the answer for you.
The strength of the 'sayanim' in Europe is estimated to about 25000
people. I am convinced that this is an underestimate of at least 2000%.
Every jew in Europe (or everywhere else) is a propable 'sayanim' and many non-jews that
are sympathetic to the zionist cause are included in this estimation.

'Sayanims' are also people that cannot act otherwise, just like Winston,
who may have had some jewish blood in him, ( who cares...) , but had
to succumb to peculiar politics due to previous 'arrangements'.

kk wrote:just like Winston,
who may have had some jewish blood in him,


Does the fact that Churchill's mother was Jewish, necessarily make Churchill Jewish?
Top

"Wherever you look, you see Jews" -- Joseph Goebbels

Franklin Delano "Rosenfelt"
Perhaps "Roosevelt's" Jewish Ancestry could
explain much in connection with his Administration
that may not otherwise be understood.
(FDR's name has 3 embedded Ref. links) 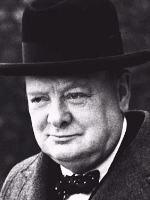 It seems that there is some reasonably solid evidence to indicate that Stalin, Churchill and Roosevelt all had at least some Jewish background -- do you suppose this could be a contributing factor in why "Roosevelt and Churchill sided with Stalin against Hitler?

"Corral fifty of the world's wealthiest Jews and there will be no more wars." -- Henry Ford
Top

Make a holocaust story connection as per the guidelines, please.

Moderator1
Only lies need to be shielded from debate, truth welcomes it.
Top

FREE ZUNDEL NOW wrote:It seems that there is some reasonably solid evidence to indicate that Stalin, Churchill and Roosevelt all had at least some Jewish background -- do you suppose this could be a contributing factor in why "Roosevelt and Churchill sided with Stalin against Hitler?

Definately
The Holocaust belief was doomed from the beginning; it rests on a rotten foundation.
Top

While it is easy to draw on anyone's background and blame anything on
his true or alleged ancestry, it would be more rational to put everything on perspective due to ideology.

Jewish ideology is very simple ideed:
"Us against the world"
One has not have to study great volumes of history to come to this conclusion;
just a few chapters of the Old Testament will give you the whole picture.
'Zionism' is just the continuation of age old principles today.

I would appreciate more facts concerning the deeds of important historical
persons, than dubious information about their ancestry.
The "holocau$t" was based and formed on myths too.
Top

kk wrote:I would appreciate more facts concerning the deeds of important historical
persons, than dubious information about their ancestry.

Why don't you prove this information is really dubious as you claim.
Top

Last request. Make a 'holocaust' connection or we'll pull the thread. We're tired of saying this.
M1
Only lies need to be shielded from debate, truth welcomes it.
Top

A last thought:
Why did Winston never mention the holocau$t?
Being a secret jew himself..
Top