He was 78 years old.
Maybe, just maybe, they believe what they are telling you about the 'holocaust', but maybe, just maybe, their contempt for your intelligence and your character is beyond anything you could ever have imagined. -- Bradley Smith
Top

Sorry to hear it, he was a great man.
Top

Ernst was a very courageous and moral man.
All who value free speech and freedom of association will miss him.
He lived large and will not be forgotten.

We're winning this fight.
If it can't happen as alleged, then it didn't.
Top

Report of his death has been added to the Wikipedia entry for Ernst Zundel:
https://en.wikipedia.org/wiki/Ernst_Z%C3%BCndel#Death

I guess the article needs some revision. For instance nothing is mentioned about his Pacifism.
Top

What a heroic person Ernst Zundel was. 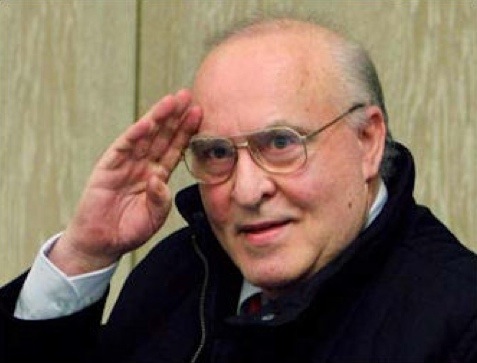 Sad news indeed. He was always a very large figure in my awareness of and journey into Revisionism. Too young for his passing and incredibly brave to stand up to the bully boys of the holocaust machine.

He told the truth, the truth that we are told we cannot know and mustn't spread. I wonder if his yellow safety helmet will be on his coffin.

God bless you Sir.
'Of the four million Jews under Nazi control in WW2, six million died and alas only five million survived.'

In memory to this extraordinary German man a short video with pictures from his life. The original video was made for his 70th birthday.

Unbowed - that was Ernst, until the end.

Even on and after his death they continue lying:

1. He died on saturday, 5th August, not sunday.
2. He didn't (!) receive credit in Mannheim for his time served in Canadian solitary confinement.
3. He brought good news to the Jewish people not terrible anguish. But their leaders turned his good news into the perceived anguish.
Robert FAURISSON: Le Blog Inofficiel / The Unofficial Blog

Rest in Peace - a strong voice and courageous man - may he someday be acknowledged by the public for his work in exposing the lie.
Top

During my walk I thought how interesting it would be to talk with Zundel and what material he has to show. I considered I would have to act fast because he wouldn't live so much longer. Then I read this sad message......


Thank you Mr. Zundel for your courage. Without you, the revisionists wouldn't have progressed so much. May you find finally peace!
Top

A hero of revisionism, the struggle of Ernst Zündel

In this two-part video, Vincent Reynouard pays tribute to Ernst Zündel, who died on 5 August 2017.

After briefly summarizing his life, he recounts his revisionist career that begun in 1978, with a public protest against the spread of the "Holocaust" series.

He then referred to his two trials, that of 1985 and, above all, the "Great Holocaust Trial" in 1988 with Professor Faurisson's testimony and Fred Leuchter's appearance.

Finally, he says how Ernst Zündel's struggle, which has earned him attacks and imprisonment, has allowed the inexorable rise of revisionism.

1) A committed and persecuted revisionist

- Lack of competence of Holocaust expert No. 1
- Our three companions are falling apart like “old farts”

3) 1988: Ernst Zündel obtains the "Great Holocaust Trial"
- Witnesses and experts follow at the witness stand to undermine the official thesis
- Professor Faurisson's presentation and the appearance of Fred Leuchter

4) The inexorable rise of revisionism


You will find transcripts of Vincent Reynouard's editorials here: http://ungraindesable.the-savoisien.com/index.php?pages/English-section2

Below is the (mainly-)hostile obituary published in the New York Times for Mr Zundel.

If you have read this thread and the prestige-NYT obituary, you will notice that readers of CODOH-Forum have more information. The journalists, three of whom are credited with contributing to the obituary, knew neither Zundel's cause of death nor the fact that he died at his parental home in the Black Forest (at which, I presume, he has lived in 'exile' from his adopted North America since released from prison in 2010), for example -- basic facts in this CODOH-Forum thread's very first post.

Highlights
(1) No mention that Zundel's stated reason for emigration in 1958 was strong pacifism (military service was mandatory in West Germany at the time); nor of his continued pacifism throughout life. (i.e., that he was not some cartoonish Hollywood 'neo-Nazi' calling for violence.)
(2) Vague assertions that the Leuchter Report is 'discredited' but no mention of the Rudolf Report.
(3) More space given to quotations from busybody Deborah Lipstadt alone than to quotations from Ernst Zundel himself.
(4) Much space for what turns out to be the final politically relevant act of Zundel's life -- his 2017 travel ban against entering the USA (See CODOH thread here: Ernst Zundel has been banned from the USA (April 2017) for 'showing no regret for Holocaust denial'.
(5) On the positive side, thee obituary mentions Dr. Faurisson and Ditlieb Felderer by name.
(6) Another example of the writer's laziness; he calls David Irving "the world’s best-known Holocaust denier."

Ernst Zündel, who from a ramshackle Victorian house in central Toronto churned out books, posters, audiotapes and memorabilia denying the Holocaust and spreading neo-Nazi messages worldwide, died on Saturday at his home in Bad Wildbad, Germany. He was 78.

The death was confirmed by Marina Lahmann, an official in the town. No cause was provided.

Mr. Zündel was convicted twice, in 1985 and 1988, under a rarely invoked law criminalizing the knowing publication of false news that caused, or was likely to cause, harm to the public interest, which the authorities interpreted to include Canada’s commitment to tolerance.

But both convictions were overturned, and critics said the prosecutions, however well intentioned, did more harm than good by giving Mr. Zündel and other Holocaust deniers, including Robert Faurisson of France and Ditlieb Felderer of Sweden, a platform and a chance to bring truth itself into disrepute.

Mr. Zündel showed up at court wearing a hard hat and a bulletproof vest, claiming to be the victim of a conspiracy to silence him. Renowned historians, including Raul Hilberg and Christopher Browning, were subjected to withering cross-examination. Several Auschwitz survivors, among them Dennis Urstein and Rudolf Vrba, gave grueling testimonials about what they had endured.

At times it seemed — as one 1985 headline in The Miami Herald put it — as if the Holocaust itself were on trial.

The first conviction was tossed out on a technicality, and the second was overturned in 1992, when the Supreme Court of Canada found that the law was an unreasonable limit on freedom of expression.

Mr. Zündel, who moved to Canada from Germany as a teenager, was twice denied Canadian citizenship. In 2000 he moved to the United States, where he ran a website and lived with his third wife, Ingrid Rimland.

In 2003, American authorities arrested Mr. Zündel for overstaying his visa. He was sent back to Canada, but the authorities there did not want him. They detained him as a threat to national security, given his ties to neo-Nazi groups, a decision that drew criticism from some civil liberties advocates.

After another lengthy legal process, Mr. Zündel was deported to Germany in 2005. A state court in Mannheim, after yet another tumultuous trial, convicted him in 2007 on 14 counts of inciting hatred and one count of violating the memory of the dead. (A member of his defense team, Sylvia Stolz, was jailed and disbarred for signing “Heil Hitler” on a legal document.)

Mr. Zündel was sentenced to five years in prison but released in 2010, partly in consideration of his time spent in pretrial detention.

Recently, Mr. Zündel petitioned the American authorities to allow him to travel to Tennessee to care for his wife, who is 81. The administrative appeals office of the Department of Homeland Security denied his request on March 31.

“The record shows that the Applicant is a historical revisionist and denier of the Holocaust, distributing writings, books, tapes, videos and broadcasts to promote his views,” the office found. “The record indicates further that these publications agitated for aggressive behavior against Jews. Furthermore, the Applicant has been a leader in these activities for decades and has shown no regret or remorse for his actions.”

On Monday, the Center for Israel and Jewish Affairs, Canada’s leading Jewish advocacy organization, said in a statement: “Ernst Zündel’s death brings to a close an especially pernicious saga that plagued Canadians for decades.”

In a phone interview, Bernie M. Farber, who was the chief executive of the Canadian Jewish Congress, now part of the Center for Israel and Jewish Affairs, said that “for decades, he was the gasoline that fed Holocaust denial” in Canada.

Mr. Farber, now the executive director of the Mosaic Institute in Toronto, added, “He was Canada’s most famous hatemonger, and he reveled in it.”

Mr. Zündel was on some levels “a run-of-the-mill neo-Nazi and Holocaust denier,” said Deborah E. Lipstadt, a professor of modern Jewish history and Holocaust studies at Emory University in Atlanta. But, she said, he had stood out for his determination to use mass media to spread his views.

“Prior to the digital age, he was responsible for spreading these materials across Europe and the Americas,” she said. “They became important resources for an array of neo-Nazi, white-supremacist and Holocaust-denying groups.”

During Mr. Zündel’s trials, his defense team commissioned a report from a self-proclaimed expert on executions, Fred A. Leuchter Jr., who denied the existence of the gas chambers. In fact, he had no such expertise and was later charged with fraud.

“The report, which became and remains a cornerstone of the Holocaust-denial movement, claimed that gas chambers were a scientific impossibility,” Professor Lipstadt said. “Based on shoddy methodology, it was riddled with basic scientific errors, miscalculations and false claims.”

Taking the witness stand at Mr. Zündel’s second trial, David Irving, perhaps the world’s best-known Holocaust denier, vouched for the Leuchter report. He later wrote the introduction when it was published as a book. (In Britain, Mr. Irving unsuccessfully sued Professor Lipstadt for libel, a case dramatized in the 2016 film “Denial.”)

Professor Lipstadt was among those who expressed worry that the attention Mr. Zündel received over the years was what he wanted. “On a strategic level, sometimes I wondered if the various trials did not create a modicum of sympathy for a man who deserved not sympathy but utter contempt,” she said.

Ernst Christof Friedrich Zündel was born on April 24, 1939, four months before Nazi Germany’s invasion of Poland, in Calmbach, now part of Bad Wildbad. He moved to Canada in 1958 to study advertising and graphic arts.

In a 1983 interview with The Globe and Mail, the Toronto newspaper, Mr. Zündel said that he had grown up in an apolitical family and knew scarcely any Jews.

He said of the origins of his beliefs, “The absolute God’s honest truth is that it was a reaction to the incessant anti-German propaganda stereotyping the Germans.”

Mr. Zündel, twice divorced, had two sons, but details about survivors were not immediately available. Reached by phone on Monday, his wife, Ms. Rimland, replied, “Whoever calls will get the same answer from me: I will give no comment because the mainstream media is too biased.”

A version of this article appears in print on August 8, 2017, on Page B14 of the New York edition with the headline: "Ernst Zündel, 78, Promulgator of Holocaust Denial."

Users browsing this forum: No registered users and 15 guests