Got to keep Jewish money flowing into campaign coffers.

What next... A public holiday

Several U.S. congressmen introduced resolutions to honor the life and work of Elie Wiesel, including a proposal to create a memorial statue to be placed in the U.S. Capitol building.

On the same day, Rep. Steve Cohen, D-Tenn., proposed a bill for the statue to memorialize the activist and 1987 Nobel Peace Prize winner because his “moral leadership served as a beacon across our country and around the globe,” Cohen was quoted as saying in a release.

His bill as of Monday had 14 cosigners, both Democrats and Republicans.

“Elie Wiesel was one of the greatest examples of good the world has ever seen,” Steve Israel said of Wiesel, who died July 2. “He educated the world about the atrocities of the Holocaust, taught us the true meaning of ‘never again,’ and devoted his entire life to ridding the world of hate and intolerance. I am proud to introduce this resolution to honor Mr. Wiesel’s life and acknowledge the indelible mark he has made on the Jewish community and the entire world.”

“Elie Wiesel was a giant,” Meehan said. “His writings brought the truth about the horrors of Auschwitz and Buchenwald to the rest of the world and for decades he was a tremendous messenger for peace.”

Wiesel had been awarded numerous honors from the United States, including the Presidential Medal of Freedom, the Congressional Gold Medal, the National Humanities Medal and the Medal of Liberty.

Most people agree Elie Wiesel is a fraud. The best testament against him is on the Codoh site by Nikolaus Gruner who was with the real Lazar Wiesel at Auschwitz. The phony Elie Wiesel spoke English with a strong Serbian accent, as any qualified language expert will attest. He was used as an envoy in the Yugoslav war by the U S government. The clue to his real identity lies in the Serbian Embassy in Paris. There is a photo of his entry card to France in 1955 on the internet, issued by the Yugoslav Embassy in Paris. The photo is cut off so we see Elie Wiesel's photo but no name on the card. If we could find this entry card or how it came to be on the internet, we would solve the problem of Elie Wiesel's true identity.
Top

You again? That entry card with the photo that looks like Wiesel is NOT Elie Wiesel at all - that's why the name was cut off. I was fooled by it for a long time, but finally realized other photos of Wiesel taken at that time look very different.

As to other posters in this thread, we see that the few Jewish congressmen who tried to get something started for a statue of Wiesel in the Capitol bldg. didn't get much response. Guess our representatives in Washington as not as bad as we sometimes think they are. There wasn't any resolution in Wiesel's honor either. During the "metoo" paranoia Wiesel was credibly accused of sexual assault on a 19 year old. http://www.eliewieseltattoo.com/elie-wi ... is-legacy/
Top

If Mr Ennis wants to present the evidence of a qualified linguistic expert he will have to find one, but in the meantime here is my observation as a non expert linguist.

I have spent quite a bit of time in Budapest recently and I speak Hungarian at a basic level. On the one hand I have to recognise that Elie Wiesel's accent is nothing like that of a modern citizen of Budapest speaking English. On the other hand however Wiesel was a Transylvanian Jew and claims that he came to hate the Hungarian language so much that he never spoke it again after leaving. I have seen video footage on YouTube where he returns to Transylvania and attempts to speak Hungarian. His efforts are very basic, so basic that even I can understand them.

On yet another hand, I have also seen a YouTube video where he is in discussion in English with another Hungarian Jew now living in Stockholm and their accents are quite similar.
Top

My dad was born in Dublin, Ireland into a Protestant family. He was educated at school where they usually used Gaelic and at home he spoke English. At the age of fourteen his family with him of course moved to northern Ireland and from that date he never spoke Gaelic again, he had no need to.

He is now 91 and one would think that in 76 odd years he would have forgotten how to speak Gaelic, which seems to be the sort of argument made by and for Wiesel. Not a bit of it. My dad speaks very good Gaelic. My point is that if a language is learned as a child it never goes away, it is there in the memory ban waiting to be drawn on.
'Of the four million Jews under Nazi control in WW2, six million died and alas only five million survived.'

The point here is that the photo on this particular entry card from the Serbian or Yugoslav Embassy in Paris is claimed to be a photo of Elie Wiesel at the age of 26. It definitely is not. This is what is supposed to support Ennis' claim that Wiesel is Serbian. It is a pointless discussion. If Kingfisher or borjastick have some real evidence on that score, rather than their own subjective experience with speaking languages, they should bring it forth. But so far they haven't.
Top

"The point here is that the photo on this particular entry card from the Serbian or Yugoslav Embassy in Paris is claimed to be a photo of Elie Wiesel at the age of 26. It definitely is not" I wouldn't say "it definitely is not".
Maybe, just maybe, they believe what they are telling you about the 'holocaust', but maybe, just maybe, their contempt for your intelligence and your character is beyond anything you could ever have imagined. -- Bradley Smith
Top

I wouldn't say "it definitely is not".

You wouldn't say it because you don't know enough about it except "it kinda looks like him."
That's what I thought, too, and that's why I accepted it as Wiesel early on and didn't question it after that. I thought it was a dead ringer for EW.

But this person, Ennis, has been pushing the idea that Wiesel was Serbian for a long time now, which I have never accepted. He uses this entry card to back up his claim based solely on his perception of Wiesel's accent. It finally dawned on me that this could be someone other than Wiesel, and then I realized it definitely was not Wiesel. Look at pictures of Wiesel at that age -- even at age 16 he did not look like this.

Wiesel as an older and old man look like he could have looked like this in his youth. That, I think, is the illusion we're under when mistaking this guy for Wiesel. Which is funny.

Here is Elie Wiesel at 26 on this page: http://mahoundsparadise.blogspot.com/20 ... uriac.html

I have this picture at Elie Wiesel Tattoo.com too but it was easier to find it here. Look at that black hair, and that hooked nose. That is the actual Wiesel. Not the guy on the entry card.
Top

I have this picture at Elie Wiesel Tattoo.com too but it was easier to find it here. Look at that black hair, and that hooked nose. That is the actual Wiesel. Not the guy on the entry card. 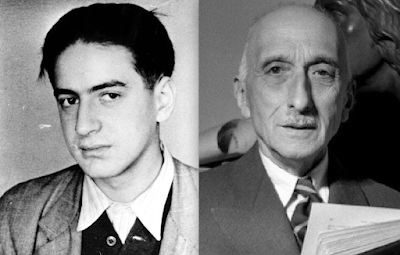 The "black hair" is an artifact of quality of camera, quality of film, lighting, contrast, camera setting etc ..... Another non-hooked nose and another dead-ringer:

As Dresden said the two photos are clearly of the same man, whether that man is only the EW we know or are of another man who claims to be EW. Personally I don't believe a word of what EW said happened to him, I find it all somewhat odd and lacking in much credibility.
'Of the four million Jews under Nazi control in WW2, six million died and alas only five million survived.'

But you can believe what you want, as most people do about Wiesel. Everyone is an expert, especially here on Codoh Forum.
Top

sweetie pie wrote:The nose on the pictures you've shown and the nose on the guy on the entry card are not the same nose. Not by a long shot.

But you can believe what you want, as most people do about Wiesel. Everyone is an expert, especially here on Codoh Forum.

You're welcome to your opinion Sir but it could be wrong. I would accept it could be two different guys but they look very similar to me, though the ears don't quite match. The problem is that getting shitty with us just because we don't agree with you won't win many fans. As to your last quip we are not all experts nor are we ego maniacs but some us are very well read on the holocaust and know our stuff by doing many many years of research and reading. How about you?
'Of the four million Jews under Nazi control in WW2, six million died and alas only five million survived.'

IMO, the discussion over what pictures are actually Wiesel is rather irrelevant, a distraction even.
We have enough on Wiesel as it is. He's been a gift to revisionist truth.

Everyone is an expert, especially here on Codoh Forum.

Indeed, a good many of us here are in fact are "experts".

The 'holocaust' storyline is one of the most easily debunked narratives ever contrived. That is why those who question it are arrested and persecuted. That is why violent, racist, & privileged Jewish supremacists demand censorship. What sort of truth is it that denies free speech and the freedom to seek the truth? Truth needs no protection from scrutiny.
If it can't happen as alleged, then it didn't.
Top
Post Reply
47 posts