A recent video production that is sure to be a classic in the further dismemberment of The Big Lie, the impossible '6M Jews, 5M others, & gas chambers'. Pt. 1 takes the viewer through the main myths & German camps, pt. 2 will look at Auschwitz / Birkenau and much more.

Actually, the 11,000,000 I just cited is nothing compared to the numerous other equally bizarre & unfounded, yet substantially larger numbers, that are alleged.

Part 1 demonstrates the ever changing numbers and documents blatant fraud in building a storyline that has taken on truly absurd dimensions. It goes from the most basic building blocks of the Zionist/ Allies propaganda campaign to a scientific demolition of the 'Dachau gas chambers'. It delivers the goods!

Via the link below, have a look at the abstract and transcript, be very sure to view the video.

Revisionists are just the messengers, the absurd impossibility of the ridiculous 'holocaust' storyline is the message. 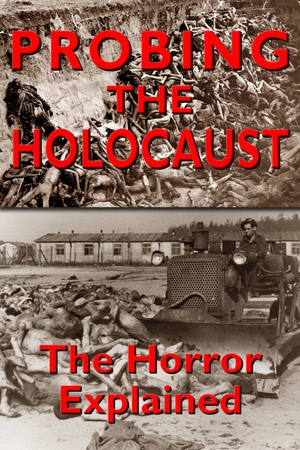 Extremely powerful work, it absolutely knocks your socks off.
Looking forward to part two.
Many thanks for the truth.
B.
Revisionists are just the messengers, the impossibility of the "Holocaust" narrative is the message.
Top

I watched this video, I have a question.
They mentioned that the delousing chambers at the end of the very same building were at one time claimed to be gas chambers and the jews were hung up on hooks.
Does anyone here have citation?
Top

Great production. Germar is releasing really great videos.
And I'm really grateful for Dachau gas chamber part. I searched everything on codoh for a good demolishing, but I never found anything which satisfied me as much as Leuchter's analysis.

cold beer wrote:I watched this video, I have a question.
They mentioned that the delousing chambers at the end of the very same building were at one time claimed to be gas chambers and the jews were hung up on hooks.
Does anyone here have citation?

I watched it myself right now and per coincidence dug deeper on this. If we talk about the same thing, here would be a citation:

View of the hooks outside the door to the gas chambers in Buchenwald.

Original caption reads: "Buchenwald was the home of Ilsa Koch, wife of the Commandant. She was known as the "bitch of Buchenwald", an insult to every dog who ever lived. She had her inmates tatooed in various designs, then had them killed, then skinned and their hides tanned to make book bindings, lamp shades, and other articles. I saw these things! One story has it that she enjoyed sexual intercourse with her victims- this may be apocryphal. These "meat hooks" were used on the bodies of humans!"
https://collections.ushmm.org/search/catalog/pa1168298

There was more of interest as well. Such as the Russel Barton story for example.
Top

If this was supoosed to replace Hunts film- some comments...

1. The narrator has to go- he sounds cretenis and mendacious and will detract people from revisionism in my opinion.

With the smashing of Hunt- Germar Rudolf himself voiced over his own films...

Curated Lies was boring- but that's because of the content being boring to cover.

All others he produced were the best works to date- because of Rudolf's sincere, piercing and intellectually honest voice and manner- the aristocratic American Don Goodman rip off creates the impression that the Revisionists are lying, not vice verse (my opinion).

Rudolf needs to narrate or find someone with equally compelling and sincere talent like Hunt to do so.

2. The expansion of the Dachau segment and the expansion of the introduction segment were fantastic- the dropping of the exposure of Gena Turgel and Ursula Haverbeck and the media portrayal etc- was a huge mistake- unless it is set to be included elsewhere? The public needs to see how revisionism works, how the media are deliberate participants (Engel, NBC, Neeley etc) to know they are being hoodwinked.

Other than that of course it's a great film- it's essentially the same exact film as Hunt's.

Did the Buchenwald de-lousing room block look the same as the one at Dachau? Because when one compares the picture above with this one supposedly from Dachau, certainly captioned as such on google, we see clothes hanging outside on the very same hooks and not human bodies.

Oh dear what a tangled web we weave... 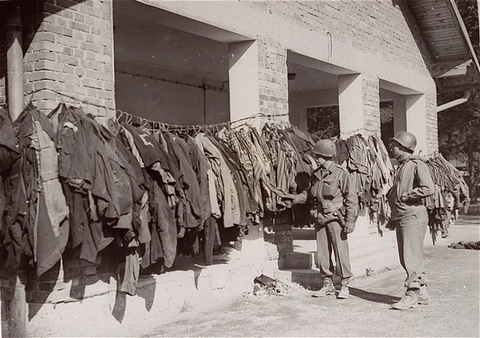 borjastick wrote:Did the Buchenwald de-lousing room block look the same as the one at Dachau? Because when one compares the picture above with this one supposedly from Dachau, certainly captioned as such on google, we see clothes hanging outside on the very same hooks and not human bodies.

Oh dear what a tangled web we weave...

"Yes", and that's pointed out in the video. Just shows you how sloppy they are with the claims. They had a preset narrative concept and then fitted in all the "evidence" into it.

Propaganda (including Political Warfare Executive and deception plans): Secretary of State minute to Prime Minister No 43/1. Leaflets about German atrocities against Poles and Jews.
http://discovery.nationalarchives.gov.u ... r/C6564647

I think this new video is a mistake, and that it should be withdrawn. My reason is that I believe the original 'Questioning the Holocaust' is the single best introduction to the hoax for John Q. American. Now, that is just my opinion, and it would be great if we could somehow find out what is the best introduction, but, I think the result would confirm my belief.

On one hand the new vid makes a big contribution to our knowledge about the hoax, in particular it addresses what has been to me one of the few real mysteries of the hoax, which is, what is the Dachau 'gas chamber', when was it built, why was it built, and by whom? And the vid made a substantial contribution to my knowledge on the subject, which had been a complete mystery to me, that is, I couldn't even formulate a reasonable hypothesis that fit the information I had, much less verify it.

On the other hand, the vid provided a lot of information, but really didn't fully resolve all the issues for me, and I think that would be a great topic for another thread, but then, there was such a thread and it did not shed any light. The Dachau section of the modified vid should be a separate vid.

But the real problem is that the long, learned, complex, and yet inconclusive section on Dachau derails the focus of the original vid right at the start. The focus of the video is not on the arcane intricacies of the hoax but is on exposing the grotesque lies of the mass propaganda known to everyone in the world. And I don't think most of us realize the extraordinary quality of the original video. There are many really wonderful sections of the vid where Hunt has gone beyond a dry examination of the information to pull just amazing footage seemingly out of his hat that fully illuminates the issue, adds human interest, and that pulls the viewer into the story. I'm Quora-ing now ... and trying to illustrate the biggest lie of the hoax, and this little segment will show you what I mean ....