I stumbled across this silly image: 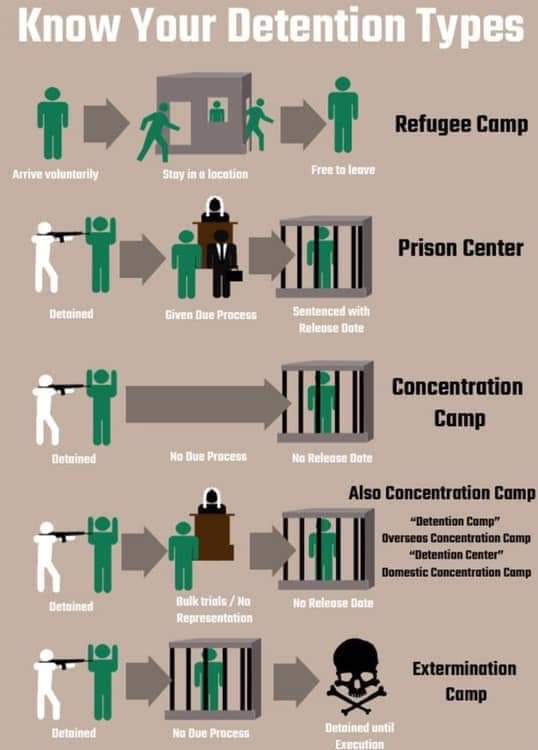 It says concentration camps have "No release date" - this graphic was probably made in reference to the comments by Congresswoman AOC (See thread for that discussion: viewtopic.php?t=12538)

However, we do know that there are some instances of Jews and other prisoners being released from German concentration camps. I did not find a thread dedicated to this topic, but I think we should have one. I'll post what I have found in a few minutes of searching. If you have any more examples, please post them here.

From the now unavailable blog "winstonsmithministryoftruth"

Eckart Klessmann, a German historian specialising in 19th century history, and not in anyway a Revisionist

In February 2000 Klessman wrote an article entitled Resistance of the Heart, which appeared in the German newspaper Die Welt (The World)

On March 6, 1943, after first gaining Hitler’s agreement, Goebbels ordered the release of all Jews living in “mixed marriages.”. . . The demonstration in Rosenstrasse was not directed against the regime as such, but was concerned only with the men torn away from their womenfolk. . . Not only were the 1,700 Jews living in mixed marriages released again, they even fetched back thirty-six who had been deported to Auschwitz. Almost all of those released survived the Hitler Reich.

Large numbers of inmates were released, even after the beginning of the war. According to Polish sources, 5,000 inmates were released from Stutthof concentration camp,[64] while the incredible number of 20,000 inmates were released from the alleged "extermination camp" of Majdanek[65]. The total number of inmates released from Auschwitz is unknown, but must have been considerably high. Danuta Czech, in her Kalendarium, for the period between February 1942 and February 1945 indicates a total of 1,100 released inmates;[66] the very fragmentary release records which have survived, however – records found by C. Mattogno and myself and covering the period between June and December 1943 alone – show almost 300 releases; suggesting that the actual number of total releases must have been far higher. Most of the releases involved educational inmates transferred to Birkenau "work education camp" for 56 days in punishment for violation of their labor contracts (this practice resulted from a Himmler order dated 28 May 1942[67]). Many of these short-term inmates were released in the summer of 1944, at the same time as the alleged mass extermination of the Hungarian Jews. We are therefore supposed to believe that the National Socialists continually released witnesses to their own mass extermination program, so that the witnesses, in turn, could inform the world about German atrocities at Auschwitz! Prior to the evacuation of the camp, the German authorities at Birkenau left 4,299 inmates behind to await the arrival of the Soviets.[68] 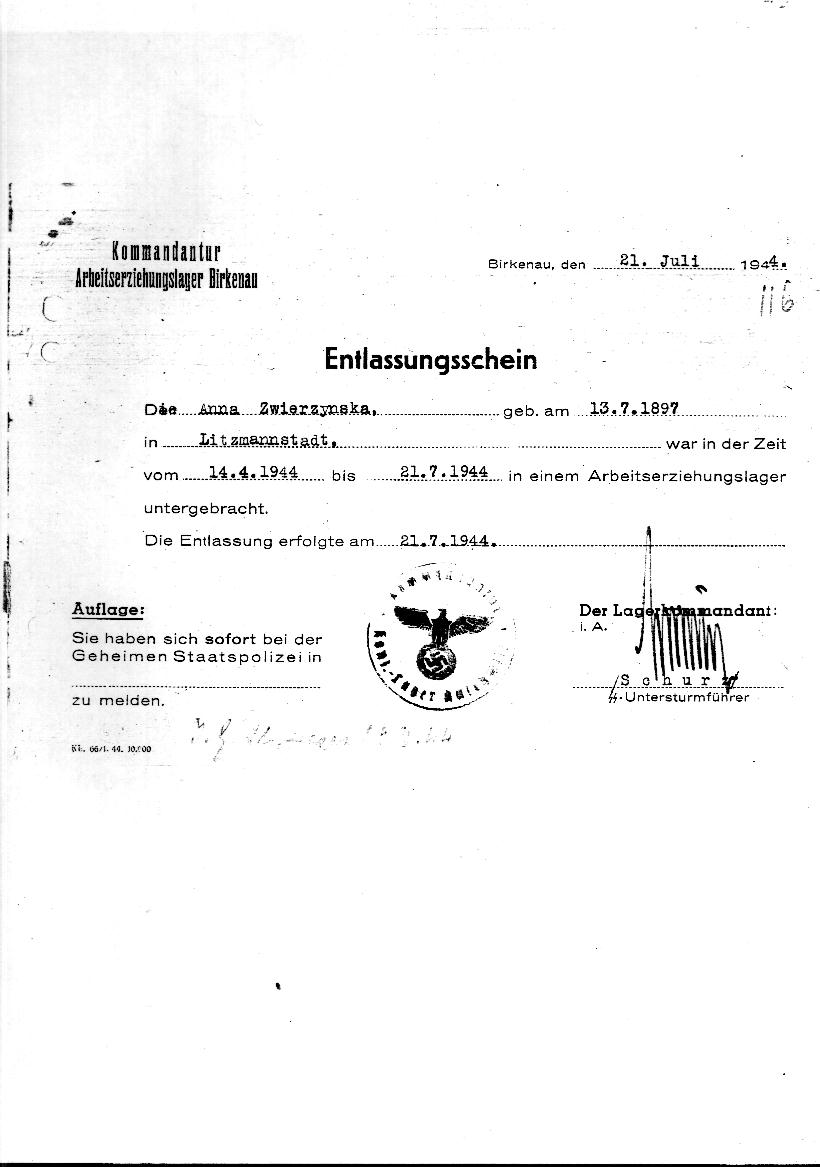 Release document of an inmate from Auschwitz-Birkenau camp dated July 21, 1944[63].


The following PDF is cited in:

Additional documents unearthed by Graf and Mattogno establish that remarkably large numbers of prisoners were released from Auschwitz. (This is in addition to prisoners who were transferred to other camps.) During just a few days in June and July 1944 alone, 186 short-term prisoners were set free. (Over the entire period of the camp’s existence, there must have been thousands.) Most of these were Poles who had been sentenced to “re-education by labor” at Birkenau for terms of four to ten weeks for breaking employment contracts. After serving their sentences, says Graf, these prisoners returned to their factories. Nothing has so far been published anywhere about these large-scale prisoner releases. As Graf notes, if many tens of thousands of Hungarian Jews were actually killed in Auschwitz in May–June 1944, as alleged, the released prisoners could easily have told the world about it.

Factual or documentary proof for a German policy to exterminate Europe's Jews, or for the existence of homicidal gas chambers, simply does not exist. On the contrary, the huge amount of wartime German documents not only provides no proof for the existence of an extermination policy, they point to the contrary. To cite just one example: German wartime documents in the archives of the Auschwitz State Museum in Poland show that 15,706 wartime camp prisoners, nearly all of them Jewish, received medical care at the hospital of the Auschwitz III (Monowitz) camp between July 1942 and June 1944. Of these prisoners, 766 died in the hospital, while the rest of them were released.[note 2] This fact simply doesn't square with an extermination policy.
...
2. Panstwowe Muzeum w Oswiecimiu (Auschwitz State Museum archives), Syg. DAuI-III-5/1, 5/2, 5/3, 5/4.

What Happened to the Jews who were Deported to Auschwitz but were not Registered There?
http://www.vho.org/GB/c/JG/Orange-eng.html

Due to his former membership with the German Communist Party, Wilhelm Dibowski was taken into “protective custody” in May 1939 “for the length of the war,” even though there was no war at that time yet. In January 1941 he arrived at the Auschwitz main Camp, and from the winter of 1941/1942 up to February 1943 he was at Auschwitz-Birkenau, where he had to unload construction material of the Huta Company at the Auschwitz railway station (p. 1007). On May 5, 1943, he was released from Auschwitz, and until the end of the war he worked as a mine worker in Salzgitter (p. 1008).

From the Records of the Frankfurt Auschwitz Trial, Part 8
https://codoh.com/library/document/1821/


Jewess admits she was released from Majdanek

The hate filled Jewess author Luba Krugman Gurdus admits that she was actually released from Majdanek.

viewtopic.php?t=7672
"There is a principal which is a bar against all information, which is proof against all arguments, and which cannot fail to keep a man in everlasting ignorance -- that principal is contempt prior to investigation."
-- Herbert Spencer
Top

Re: Jews & other prisoners released from Nazi concentration camps

Why were so many "Sonderkommando" members at locations such as Auschwitz not killed, since they were allegedly witnesses to the gas chamber killings, and there was supposedly a conspiracy to hide the Holocaust?

"The orthodox historians must be deeply embarrassed by the release of 20,000 inmates from Majdanek “extermination camp,” each one of which must have been a witness to the cruelty of the “mass exterminations,” if any such exterminations ever took place there; or by the fact that the National Socialists released large numbers of inmates in the summer of 1944, in the midst of the alleged extermination of the Hungarian Jews. They cannot explain either why the Germans, during their withdrawal from Auschwitz-Birkenau, left 4,299 inmates behind, almost all of them Jewish, each of whom would have been an accuser of the Third Reich if the official version of Auschwitz squared with the historical facts."

Re: Jews & other prisoners released from Nazi concentration camps

Why would sick Poles be released from Treblinka 1? This is supposedly the same month T2 was destroyed, supposedly it would have been the workers themselves who did that. Why would they let these witnesses just go somewhere else and tell the stories of what happened at T2?

It gets even better. The Poles are not only to be released, they are also to be paid out money that had been deposited from or for them (The Commandant insisted on this):