Wyatt the Twitter guy ignores the absurdity of the alleged Auschwitz gassing process he tries to defend.

Wyatt the Twitter guy ignores the absurdity of the alleged Auschwitz gassing process he tries to defend.

Posted in another thread, Wyatt dodged this.
So let's single it out and see if he still continues to dodge the impossible claims within the very storyline that he tries to defend;

Below I have posted what the 'holocaust' storyline claims about the alleged gassings at Auschwitz/Birkenau.
I have commented as the story moves along, in essence the claims are simply impossible.

Note that I have also added this model of what the inside of one of the 'gas chambers' is claimed to have looked like at end of an alleged gassing (up to 2000 per batch), an analysis of this model follows my text below. 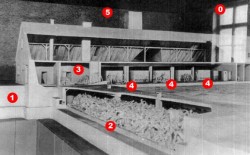 The two main 'gas chambers at Auschwitz / Birkenau were exactly the same, supposedly in Kremas II & III. So let's play along with the storyline. Up to 2000 Jews were supposedly gassed until dead, then they were supposedly taken via an elevator to the crematorium directly above.

Fact: as seen in the plans, this elevator is hand drawn, and is only 4 ft X 9 ft. How in the world could 2000 Jews have been loaded onto a 4 ft x 9 ft. hand drawn elevator in just a few minutes? Remember, the storyline says that the gassings and resultant cremations were non-stop for much of the period in question.

We supposedly have another batch of 2000 Jews waiting outside, supposedly being tricked into thinking they were about to receive showers. It would have been impossible to disentangle all the supposedly dead Jews and load 2000 of them onto to this postage stamp of an elevator, hoist them by hand up to the crematory 'ovens' in just minutes.
And this repeated process meant that the crematory ovens above would not have been capable of cremating them in the time alleged, which meant a build-up, a backlog occurred.
The storyline even states that the backlog of the to-be-cremated-gassed-Jews required stacking them outside. Once again, the alleged 2000 Jews were outside in full view of this laughable backlog claim, but supposedly they still thought they were getting 'showers'. Of course, timely aerial reconnaissance photos show nothing of the kind.

Furthermore, while the Jews were waiting outside, the storyline says that a SS man with a gas mask climbed upon the roof of the Kremas (only maybe 18 inches, or close to it, above the ground, Kremas II & III were largely underground) and dropped Zyklon-B granules into a container and lowered it down into the 'holes' in the roof, into the morgues which were supposedly converted into a gas chamber. The waiting 2000 Jews would have a clear view of the man on the roof's activity, yet these 2000 Jews were supposedly not concerned and still thought they were going to get innocent showers. The storyline is utterly ridiculous.

The Zyklon-B pesticide granules took/take hours to complete the outgassing of their cyanide load. The storyline says that this same SS man on the roof, supposedly wearing a highly visible gas mask, withdrew the container up from the 'gas chambers' in just minutes. Remember, the Zyklon-B pesticide granules were allegedly dumped and lowered into the 'gas chambers'. And since we know that the Zyklon-B pesticide would have taken hours to finish releasing it's cyanide load we have a situation where anyone in the entire area would have been vulnerable to gassing.
Yes, the storyline also says that there were vents which were used to remove the gas, but then we are still in a situation where the entire area is vulnerable to cyanide. Not to mention that this certainly would have been noticed by the alleged waiting 2000 Jews. And where does this SS man in a gas mask put the outgassing Zyklon-B pesticide granules which he has supposedly withdrawn, which would be releasing cyanide for hours?

The entire, bizarre story is unsustainable with even the slightest scrutiny. It's no wonder why Jewish supremacists trot out senile, lying 'survivors' (who wouldn't have even survived if the tall tales were true) for emotional impact. No wonder that there are Thought Crime laws against examining this absurd process. 'House of cards' is an understatement.

As for it being easy to ventilate, move corpses, clean, bring in the next batch, and generally achieve what is alleged I also suggest:
'ONE PICTURE = 1000 WORDS'
http://forum.codoh.com/viewtopic.php?t=2651
Here's the initial post by ASMarques' in that thread:

This would be the one picture I would choose for a crash-course in Holocaust awareness for the intelligent young, lest they forget. Much better than collecting millions of buttons, soda tabs etc.

This is the scale model of Krema II in the Auschwitz Museum, apparently placed behind a glass protection in order to prevent the small dolls being stolen by visitors.

Key to the image:

0 - Reflection of the window on the opposite side of the room.

1 - Underground gallery where many hundreds of victims at a time got undressed for the fake showers in room number 2. According to some Holocaust scholars, this gallery is also supposed to have had fake showers installed in it, just to confuse the undressing victims.

2 - Underground gas chamber, called simply "morgue" or "mortuary cellar" in all German documents and blueprints, in order to fool the future generations of scholars looking for the mysteriously vanished Jewish race. This is where many hundreds of victims were gassed at a time, in a round-the-clock mass murder industrial process by Zyklon B, the same product used to preserve human lives by killing lice (unless the witnesses are lying or very, very confused).

3 - Small elevator bringing daily many thousands of gassed corpses from the underground chamber to the crematories at ground level. Known to the fun-loving SS as "The Little Elevator that Could".

4 - Crematory ovens where many thousands of corpses a day were instantly vaporized, without even having to wait for some heat to dissipate before each door opening, contrary to the ovens in your run-of-the-mill crematory. Alas, the technology of the ovens was one of the best kept secrets in the Reich (unless they were ordinary ovens operated by miracle) and no one has been able to duplicate it.

5 - The famous chimneys, producing lots of smoke, contrary to the chimneys on your run-of-the-mill crematory that produce none. This is attributed to the twisted minds of the German guards who attempted to hide their crimes from the curious in the neighbourhood by using dense curtains of artificial smoke.

Now that you know which room is which, don't let anyone distract your gaze away from the image. Picture the gold-mining brigades, struggling through the corpse-scape, trying not to absorb any cyanide residues trapped among the still palpitating bodies, in order to perform their difficult tasks, such as inspecting body orifices, pulling teeth off, smoking cigarettes and eating sandwiches (according to the Höss testimony).

Then comes the most important part. Wait for a few seconds, take a deep breath, and picture the enormous round-the-clock traffic jam at point number 3, during the process of emptying the gas chamber of bodies, through the small elevator room, with or without (as you prefer) the folks next door waiting, soap in hand, for their shower.

Finally, ask your teacher to point the place, any place, where all those typhus dead were deposited while the live folks were being gassed in the gas chamber the Germans called "a morgue".

If you get a satisfactory answer, please let me know."

"Truth is hate to those who hate the truth."
If it can't happen as alleged, then it didn't.
Top 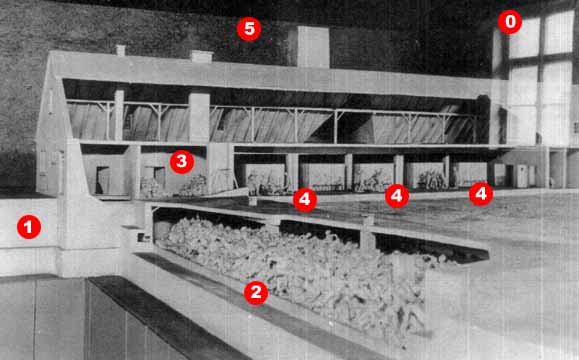 This image is a bit deceptive because it is so small and grainy. It makes it seem like the room that the #3 is in is the elevator. That is not the case, the elevator is much smaller; actually it is so small that you can hardly even see it in that image unless you know exactly what you're looking for.

Here is a larger photo of this model, with the elevator within a red square: A blown up part of the image within the red square About 1/2 a of a million people went on that tiny elevator according to "Holocaust expert" van Pelt. In his 2002 book, van Pelt claims:

"Those 2,500 square feet, in which the Germans produced perhaps as many as 500,000 corpses, was to the modern age what the Partheon had been to the Greek polis, what the Chartres Cathedral had been to Christendom."
- Robert Jan van Pelt, 2002, The Case for Auschwitz: Evidence from the Irving Trial, p. 68. https://books.google.com/books?id=83dvJ ... &q&f=false

He further calls it a work of architecture. To me, it seems more like a fitness center. I can imagine whoever was hauling up all of those thousands and thousands of corpses had quite the daily workout

Why are we criticizing the guy? If I'm reading this correctly, he's trying to disprove the official Holocaust narrative!
'Aryan' does not mean 'white'. The entire concept of 'whiteness' is racist. Hitler never identified as 'white'.
Top

christianbethel wrote:Why are we criticizing the guy? If I'm reading this correctly, he's trying to disprove the official Holocaust narrative!

Please pay attention, inform yourself before you go off the deep end.
Read what was posted in this thread and then read:

christianbethel wrote:Why are we criticizing the guy? If I'm reading this correctly, he's trying to disprove the official Holocaust narrative!

It may appear that he is deliberately using bad arguments to make the "Holocaust" conspiracy theory look bad, but I think he is not. He really just wants to believe it, for him it must be true.

Wyatt the Twitter guy and his fake "photo" as proof of 'mass extermination at Auschwitz'
viewtopic.php?t=12720

Wyatt: 'What revisionists get wrong about cremation.'
viewtopic.php?t=12721

Re: Bischoff Letter Dated June 28th 1943 and Krema 4
viewtopic.php?f=2&t=12164&p=93715#p93713
"There is a principle which is a bar against all information, which is proof against all arguments, and which cannot fail to keep a man in everlasting ignorance -- that principle is contempt prior to investigation."