Well, this is one of those things we have seen countless times, but much like when someone asks "what are your top 5 favorite movies?", it is difficult to recall off the top of your head. Still, it's important to consider when evaluating the extent which Hollywood and the film/media industry as a whole influences public opinion.

In the IMDB database, under the keyword "Nazi", the current total of relevant results comes out to 2,246.

This includes titles such as "Inglorious Basterds" and "Indiana Jones" which are very heavy on the anti-German propaganda.

But of course, this doesn't include the MANY titles that have subtle references to propaganda themes, such as the recent Netflix series, "Living With Your Self" which features a single scene during S01E03 of a Jewish Holocaust survivor telling his shocking story of his concentration camp experience (witnessing a little boy whom the Nazis "blew his brains out") to intimidate the main character.

Don't forget, either, that for Captain America -- main hero of the Avengers franchise in the Marvel universe -- his arch enemy is the Red Skull, who is essentially a caricature of the fictional "Hitler" featured in propaganda of the last century. Along with the Red Skull is his leather-clad following, "HYDRA", with their signature salute, "Heil HYDRA!". 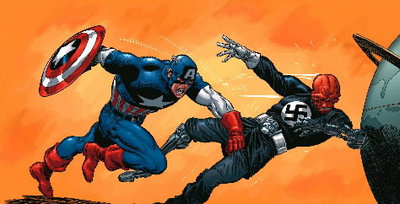 And it isn't just Marvel, either, in the fantasy realm. D.C. (franchise of Batman, Superman, Green Arrow, the Flash, etc.) has had similar themes. Recent Netflix series', including "Legends of DC", "Supergirl" and "The Green Arrow" have featured portions where the main characters were caught in an alternate universe ("Earth-10"), where the Nazis had won WWII and the world is now overrun by evil versions of everyone (including the main characters, themselves). 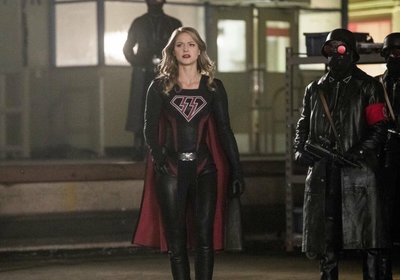 All of these storylines reinforce the common assumptions and biases of the general population and particularly younger people that 'Nazis' are indeed the supreme evil by which to compare all other elements of our culture and worldview.

How often have we seen villains with a German accent? How many scenes with references to the "Holocaust" and 'Nazis' being supreme evil? Other examples?
Top

The supposed "bad guys" in Star Wars seem to be depicted like NS Germans:

Harry Potter (originally based on books, but has movies) also appears to be similar. The star, Harry Potter, is a jewish actor and Voldemort & his gang want to kill and enslave all non-wizards and also have a hatred for wizards who are not "pure blood"

There is a new Netflix movie out, "In the Shadow of the Moon". And yes this is a spoiler but the whole movie is some mulatto girl going back in time to kill "White racist neo-Nazis" including their innocent family members, parents, etc ... to prevent some sort of civil war. She is cast in a positive light

You can find it anywhere, doubtless because the media and especially Hollywood is almost entirely Jewish.

Media bias, control, & censorship / quotes of note
viewtopic.php?t=605
"There is a principle which is a bar against all information, which is proof against all arguments, and which cannot fail to keep a man in everlasting ignorance -- that principle is contempt prior to investigation."

This type of propaganda is as old as WW2 itself. Even before official US entry after Pearl Harbor Hollywood was making anti national socialist and anti German movies such as A Yank in the RAF, Underground and Man Hunt. After the US declaration of war against Germany it was open slather. In 1943 Roosevelt even asked studio head Jack Warner to make a movie which showed Stalin in a positive light. The result was Mission to Moscow. Of course, if the Soviets were shown in a positive light this meant that the national socialists were shown in a negative light.
https://wearswar.wordpress.com/2018/01/ ... -a-comedy/
The use of comic book characters to push this propaganda is nothing new either. In the 1970s there was the Wonder Woman show starring Lynda Carter replete with Nazi villains. I watched this as a kid and even then I thought it was cheesy as hell.
http://www.imdb.com/title/tt0074074/reference
There are 2 sides to every story - always listen or read both points of view and make up your own mind. Don't let others do your thinking for you.
Top

Not directly an Anti-German theme, while that always swings in the background when the Holocaust is made a subject. Here is a comedy with two "Survivors" meeting at a dinner, because the host thought it to be a good idea to have two survivors at the event.