So this was a response I received for my revisionism

The theatre an pool was for the guards

In my response, I want to prove that they were for inmates, but I am wondering what the best evidence is for prisoners using the pool and theatre at Auschwitz?
If your beliefs cannot stand up to your own sincere scrutiny and skeptical evaluation, they are not worth having.

I suggest the following thread, JLAD:

Obviously those are just my opinions there. And I usually try to go straight for the scientific/technical arguments; I really just don't waste my time listing off Auschwitz amenities.

And the Auschwitz chapter of the Rudolf Report:

So they will just say those were at Auschwitz I and those were for people who weren't to be killed. Or for British POWs or something. Lots of excuses
"There is a principal which is a bar against all information, which is proof against all arguments, and which cannot fail to keep a man in everlasting ignorance -- that principal is contempt prior to investigation."
-- Herbert Spencer
Top

JLAD:
Tell the clown to insert his other foot.

JLAD Prove Me Wrong wrote:In my response, I want to prove that they were for inmates, but I am wondering what the best evidence is for prisoners using the pool and theatre at Auschwitz?

Don't forget to mention also the Fooball field (Soccer) located near Krema III where alleged gassings killed near 300,000 Jews.
Here we have the testimony of Ron Jones, the former goolkeeper of the Auschwitz Welsh team. 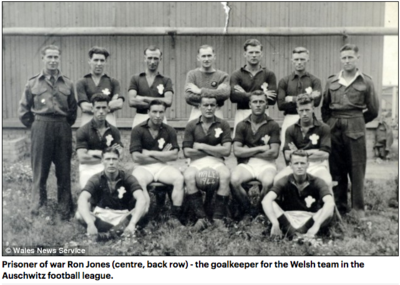 During the week prisoners were employed at forced labour camps, but on their rest day they were allowed to play football on a field just outside the camp - with armed German guards watching from the sidelines.

Father-of-one Ron said: 'We didn’t work on a Sunday so we used to play football.'

The Red Cross heard about it and brought the teams four sets of shirts - English, Scottish, Irish and Welsh.

'When you’re under those conditions it was a real pleasure to play football on a Sunday,' he said.

'But we could only play in the summer, of course, because in the winter it was deep with snow.'
.../

'There was the humiliation and the lack of food but on the whole life wasn’t too bad.'

'The Germans, contrary to what a lot of people think, were pretty good to us on the whole.'

However, on in order to have his book well sold, he can't help talking about things imposed by the propaganda he learned once at home.

He said the soldiers were terrified.
'We did not know what would happen to us. We thought at one time they would stick us in the gas chamber,' said Ron.
'It was not just Jews going in, it was Polish, political prisoners, gypsies, homosexuals.'

This article just came out, mentioning the Auschwitz orchestra:

Prisoners in Nazi concentration camps made music; now it's being discovered and performed

More than 6 million people, most of them Jews, died in the Holocaust. The music they wrote as a temporary escape, however, did not, thanks in part to the efforts of an Italian composer and pianist.

The sign above the steel gates of Auschwitz reads "arbeit macht frei" – work sets you free. It was, of course, a chilling lie, an evil hoax. But there was one surprising source of temporary escape inside the gates: music. Composers and singers and musicians, both world-class and recreational, were among the imprisoned. And what's not widely known is that under the bleakest conditions imaginable, they performed and wrote music. Lots of it.

More than 6 million people, most of them Jews, died in the Holocaust, but their music did not, thanks in part to the extraordinary work of Francesco Lotoro. An Italian composer and pianist, Lotoro has spent 30 years recovering, performing, and in some cases, finishing pieces of work composed in captivity. Nearly 75 years after the camps were liberated, Francesco Lotoro is on a remarkable rescue mission, reviving music like this piece created by a young Jewish woman in a Nazi concentration camp in 1944.
....
It seems unlikely, even impossible, that music could have been performed and composed at a place like this site of unspeakable evil, the most horrific mass murder in human history.

This is Auschwitz-Birkenau. The Nazi concentration camp in southern Poland. Set up by the Germans in 1940 as part of Hitler's "Final Solution," it became the largest center in the world for the extermination of Jews.
...
But also in the air: the sound of music, the language of the gods. This piece, titled "Fantasy" was written for oboe and strings, composed by a prisoner in Poland in 1942.

At Auschwitz, as at other camps, there were inmate orchestras, set up by the Nazis to play marches and entertain. There was also unofficial music, crafted in secret, a way of preserving some dignity where little otherwise existed.
...
Anita Lasker-Wallfisch is one of the last surviving members of the women's orchestra at Auschwitz. She is now 94 years old. We met her at her home in London.
Jon Wertheim: What had you heard about the camp before you arrived?

Anita Lasker-Wallfisch: We heard everything that was going on there only we didn't – still tried not to believe it. But by the time I arrived there, in fact, I knew it was a reality, gas chambers and... yeah…
...
The conductor of the orchestra was virtuoso violinist alma rose, niece of the famous [Jewish] Viennese composer, Gustav Mahler. Anita Lasker-Wallfisch says Rose, a prisoner herself, had an iron discipline and tried to focus attention away from the profound misery of the camp.
...
The main function of the camp orchestras: playing marches for prisoners every day here at the main gate, a way, literally to set the tempo for a day of work. And a way to count the inmates.

There's a lot more to that article, it's pretty long
"There is a principal which is a bar against all information, which is proof against all arguments, and which cannot fail to keep a man in everlasting ignorance -- that principal is contempt prior to investigation."
-- Herbert Spencer
Top

"A set of Christmas songs for a string quartet" Christian music for Jews? Happy Hanukkah.
Top

One of the many things those evil nazis did to abuse and dehumanize the chosen ones: make them play Christmas music
"There is a principal which is a bar against all information, which is proof against all arguments, and which cannot fail to keep a man in everlasting ignorance -- that principal is contempt prior to investigation."
-- Herbert Spencer
Top
Post Reply
7 posts • Page 1 of 1