Some brave hackers have gotten their hands on various documents from a law firm, which allegedly reveal all sorts of uncomfortable things related to 9/11. This is relatively recent, released on New Years Eve.

RT has done a video segment on this:

An international hacker group, The Dark Overlord, have announced they have stolen hundreds of gigabytes related with 9/11 attacks. The content includes a total of 18,000 emails, non-disclosure agreements, expert witness testimonies and communications with government officials related to the 9/11 attacks. This group hacked an unnamed US-based law firm. For more on this RT America’s Michele Greenstein joins Rick Sanchez to discuss the hacking, ransom demands and more.

RT seems to suggest these hackers are all about the money.

On Monday, New Year’s Eve, a hacker group announced it had breached a law firm handling cases related to the September 11 attacks, and threatened to publicly release a large cache of related internal files unless their ransom demands were met.

The news is the latest public extortion attempt from the group known as The Dark Overlord, which has previously targeted a production studio working for Netflix, as well as a host of medical centres and private businesses across the United States. The announcement also signals a slight evolution in The Dark Overlord’s strategy, which has expanded on leveraging the media to exert pressure on victims, to now distributing its threats and stolen data in a wider fashion.
...
In its announcement published on Pastebin, The Dark Overlord points to several different insurers and legal firms, claiming specifically that it hacked Hiscox Syndicates Ltd, Lloyds of London, and Silverstein Properties.
...
In its extortion note, The Dark Overlord included a link for a 10GB archive of files it allegedly stole. The group also provided a link to this archive to Motherboard before publishing its announcement. The cache is encrypted, but the hackers are threatening to release the relevant decryption keys, unlocking different sets of files at a time, unless the victims pay the hackers an undisclosed ransom fee in Bitcoin.

“Pay the fuck up, or we’re going to bury you with this. If you continue to fail us, we’ll escalate these releases by releasing the keys, each time a Layer is opened, a new wave of liability will fall upon you,” the extortion note reads.

This can only be positive. I wonder if someone can crack these archive files (the password can't be very complex in this case) -- or if anyone will pay up? Entertaining, nonetheless.
"There is a principle which is a bar against all information, which is proof against all arguments, and which cannot fail to keep a man in everlasting ignorance -- that principle is contempt prior to investigation."

Some documents have just been released today, as proof!


The Dark Overlord group claims to have stolen files related with 9/11 attacks and now as a proof they released two of what they call “checkpoints”. The hacker’s group are requesting a large amount of Bitcoin in return for the data or they threaten to publish more documents. For more on this, RT America’s Michele Greenstein joins Rick Sanchez to discuss the ransom demands. 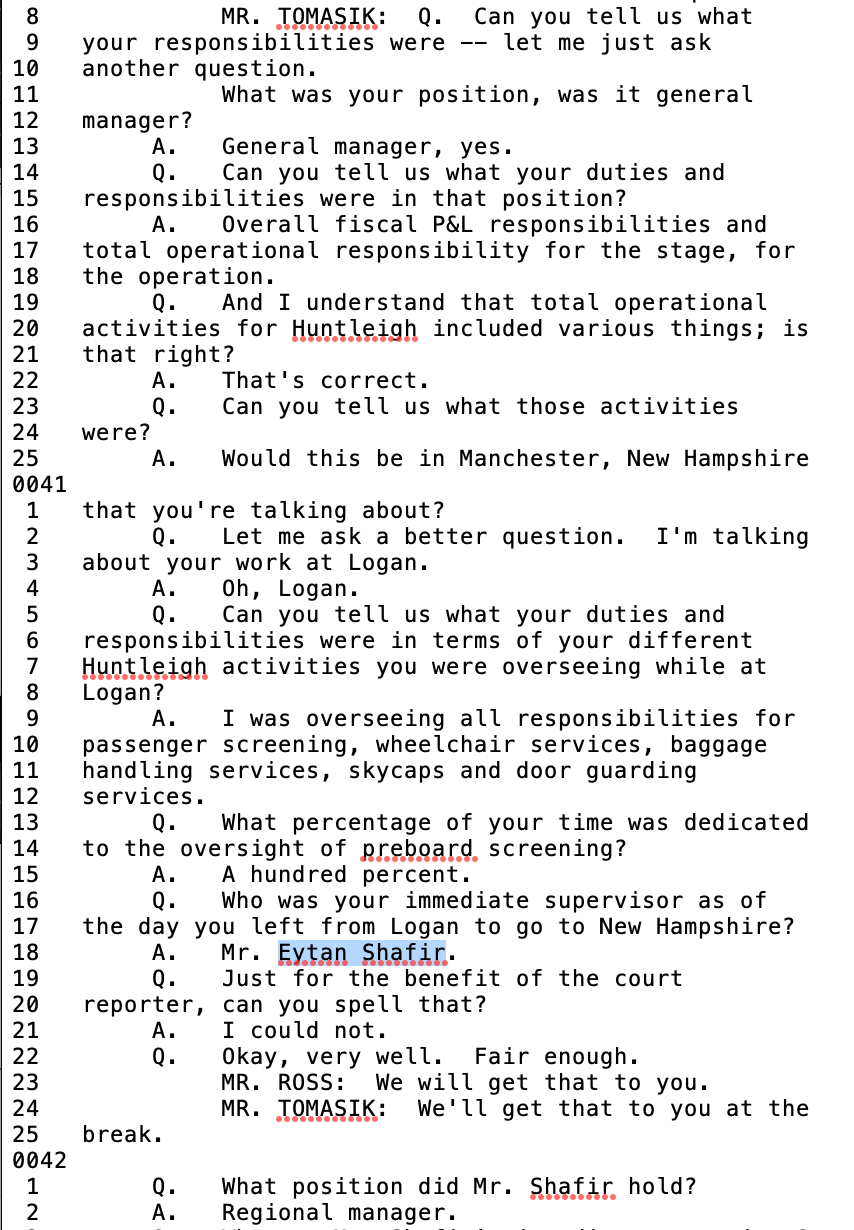 We now know the name of the regional manager for Huntleigh corporation in charge of Boston Logan Airport passenger screening at the time of 9/11. Logan Airport is one airport where hijackers got through security. Eytan Shafir.

It was already known that Huntleigh was a subsidiary of ICTS corp, which is a Netherlands-based company founded by Israelis (Shin Bet and El Al). But now thanks to this deposition of a former Huntleigh employee (Simon Robinson), we know the name of his boss. 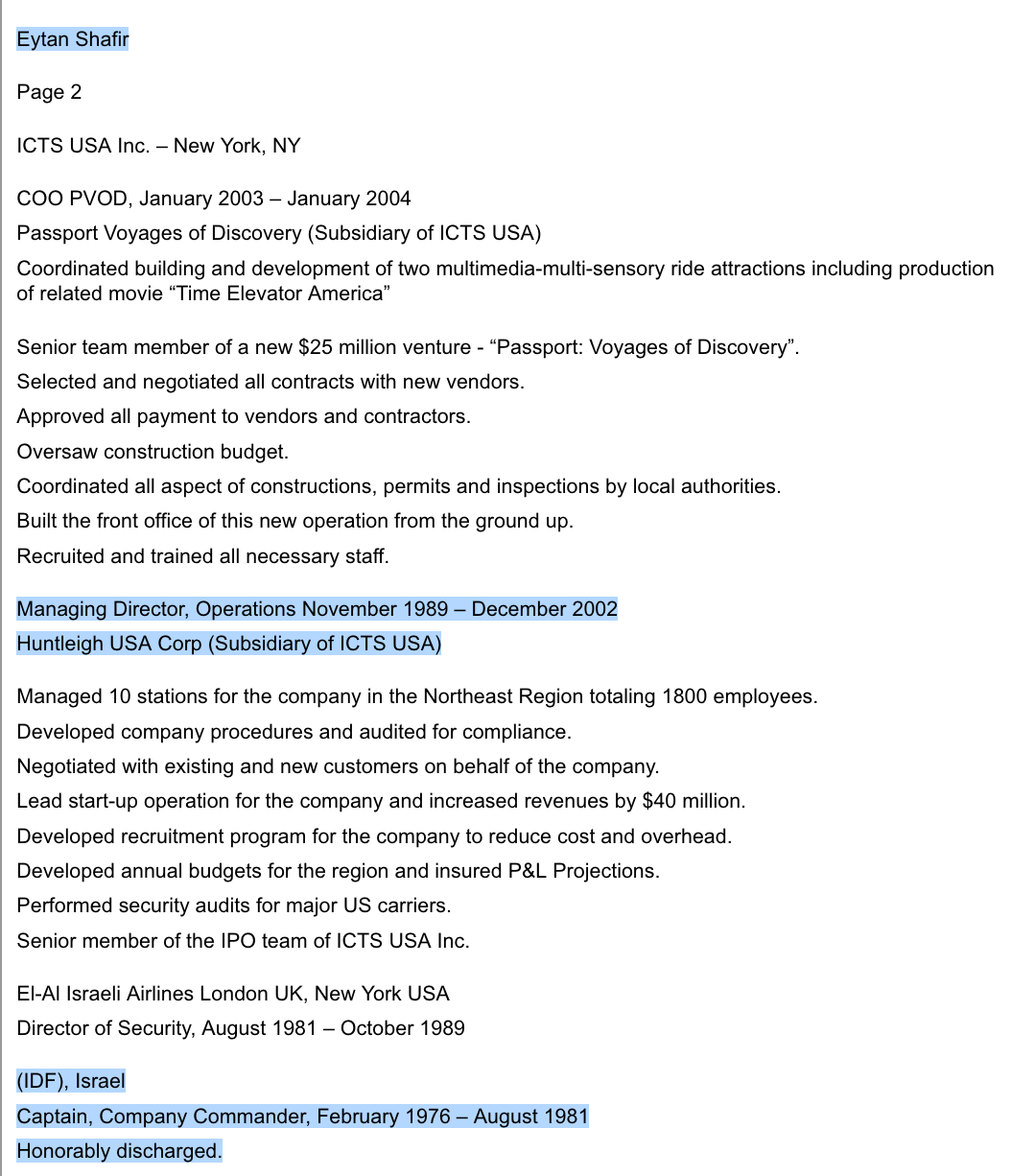 Why is this interesting? Well, Eytan Shafir, according to his resume posted online (http://archive.vn/fNBqk) is an Israeli, who served in the IDF, and attained the rank of Captain.

For those who are interested in the possible Israeli ties to 9/11, this guy could be one of Mossad's Little Helpers (sayanim).


People are just throwing them money now, and they're releasing more stuff. Tons of people are combing through the documents as we speak

89. In or about 1999, the City of New York constructed a command bunker on
the 23rd floor of 7 WTC. Multiple diesel fuel tanks were positioned within 7 WTC along
with electricity generators for the bunker in the event of a power failure.
90. On May 1, 2002, the United States Emergency Management Agency
issued a report entitled World Trade Center; Building Performance Study (AThe
[email protected]). This document reported preliminary investigative findings about the causes of
the destruction of 7 WTC on September 11, 2001. The Study suggested that the
building collapsed due to the failure of critical, non-redundant transfer trusses. In turn,
these structural supports appear to have been subjected to significant and prolonged
fire heating fed by diesel fuel stored in 7 WTC. Such fuel was present to serve the
approximately 16 emergency standby generators located in relatively close proximity to
the over-heated trusses.

installed, operated, or maintained so as to cause, permit and to contribute
to the aggravated fire and collapse of 7 WTC and seriously damage
Citigroup=s property;
Χ Failed to build or maintain the diesel fuel tanks in accordance with New
York State Department of Environmental Conservation Petroleum Bulk
Storage Regulations;
Χ Failed to use and or enforce accepted fire and safety codes procedure
rules and regulations;
Χ Built, maintained and/or installed defective diesel fuel tanks and or related
systems inside 7 WTC;
Χ Failed to provide adequate fire protection, safeguards or barriers so as to
prevent the aggravated fire and collapse of 7 WTC;
Χ Failed to design, build, maintain, update, inspect, operate or safeguard 7
WTC necessary to provide the tenants with a safe premises; and
Χ Failed to prevent the diesel tanks and other combustible and flammables
from contributing to the collapse of 7 WTC.

Lamprecht, that is an excellent find. Regarding Israel, I will say the links have LONG since been confirmed, but this is yet another nail in the coffin.

I do not, however, see any evidence of diesel fuel ignition and sufficient fires to weaken the transfer truss region (on floors 5-7) to the point of failure--the lowest point that significant fires were witnessed was on the 8th floor. There were, however, reports of explosions from within the building at the transfer truss level (B. Jennings) and other explosions resembling the pitch of linear shaped charges (LSCs) recorded throughout the day which also came from WTC7. Thus, explosives having been used in this region is a more likely collapse initiation scenario, at least warranting serious investigation of this possibility (such an investigation has never taken place). In any case, it is interesting that the ruling in these documents was based on the FEMA report considering that this was thrown out in favor of the 13th floor/column 79 NIST scenario published years later.
Top

THIS BUILDING WAS VERY OBVIOUSLY PROFESSIONALLY PRE WIRED FOR DEMOLITION..