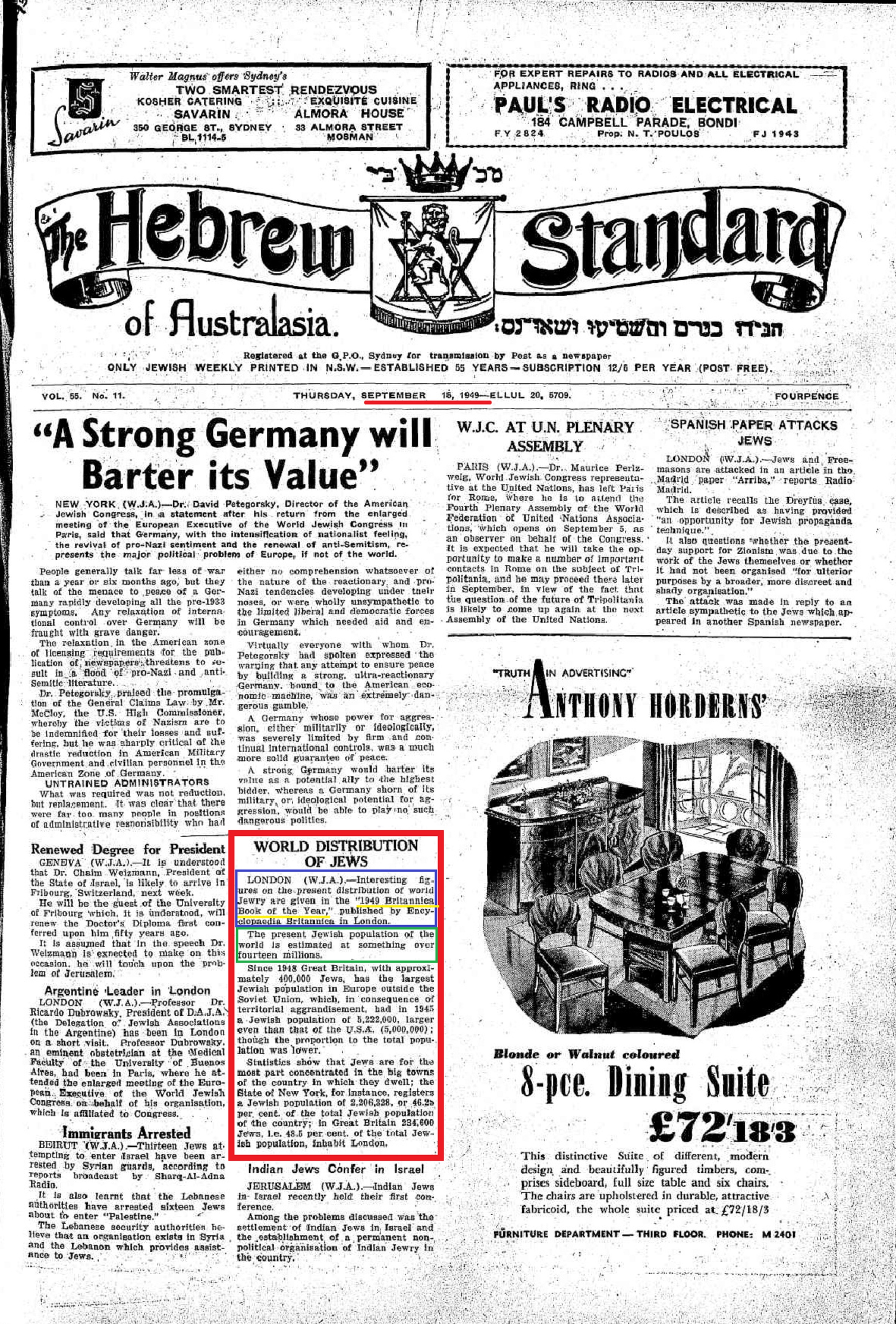 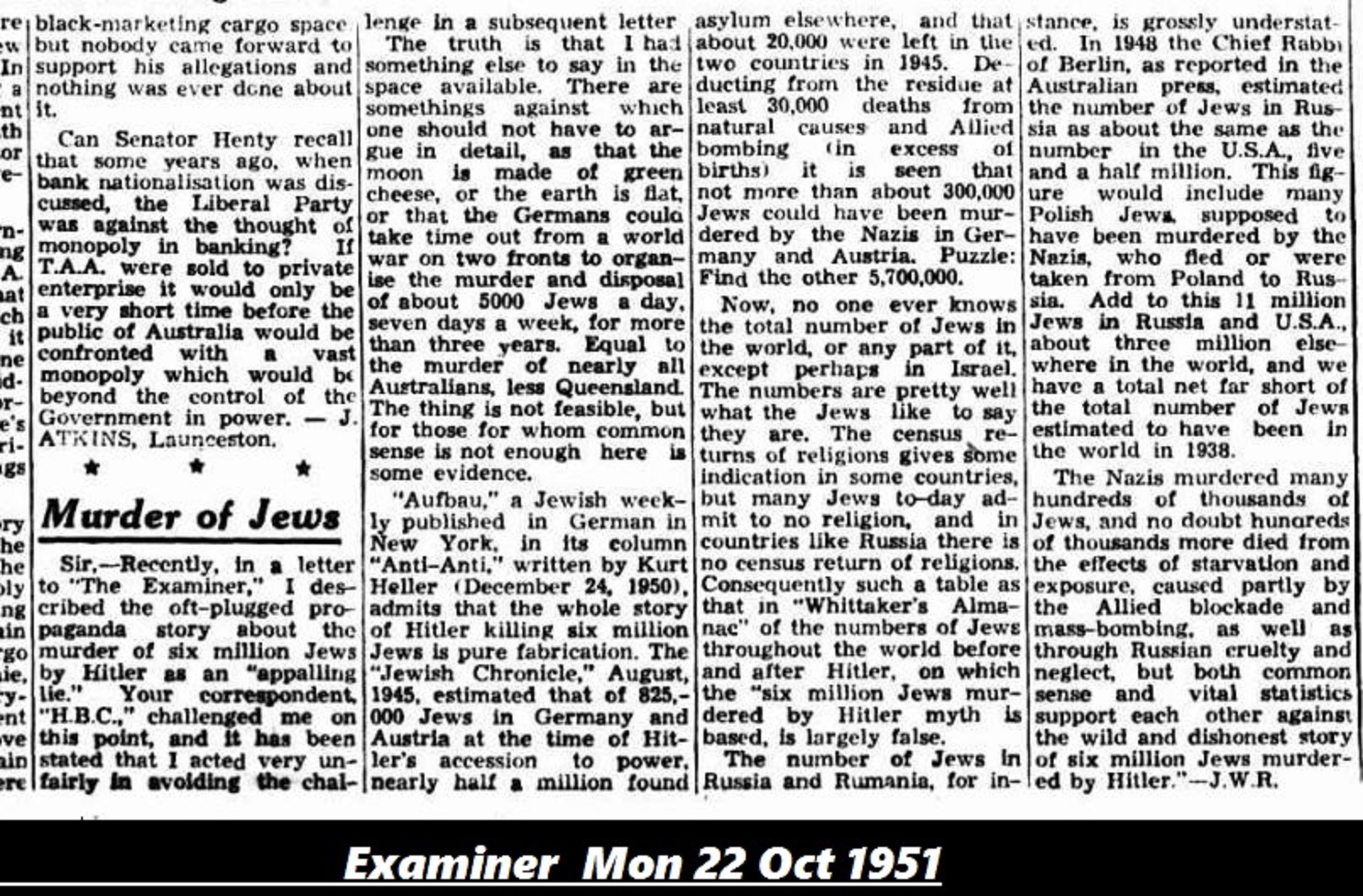 Anybody read German, here is the article mentioned above supposedly stating the 6 million figure is pure fabrication.

ANTI ANTI DER SUNDENBOCK, continued on the next page...... 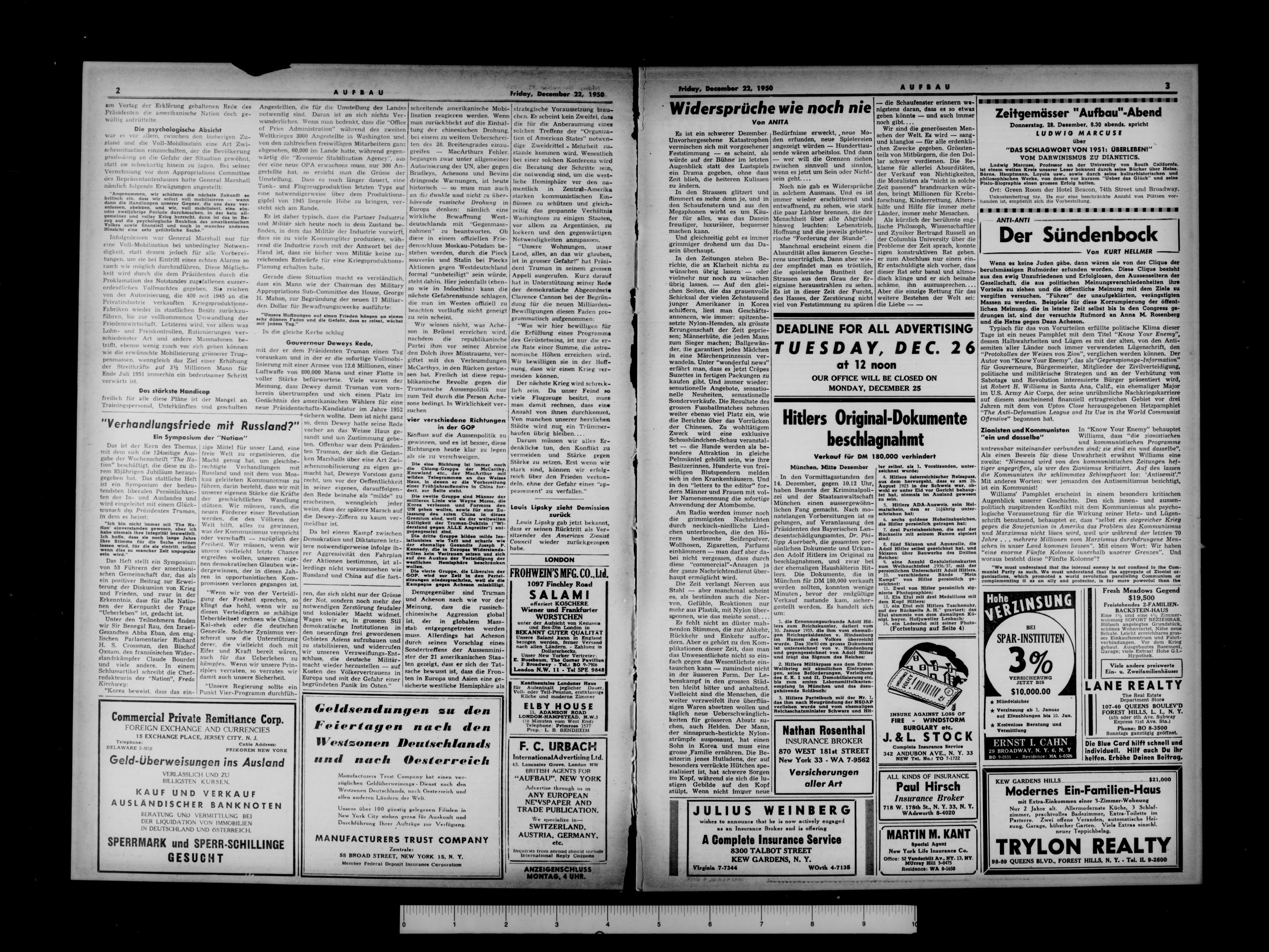 Here is a new video from David Cole.

Around 15:00: "Some of the hardcore deniers, predominately Robert Faurisson, a complete crank from France who really did not contribute terribly to revisionism. He did a few things but he was limited by kind of being dumb."

In Cole's more recent interviews he goes to great lengths to distinguish between "deniers" and "revisionists." And he throws shade at pretty much everyone except for Weber and Irving (the other guys who share his holocaust-lite position). Very poor form. And to say Faurisson contributed practically nothing is just ridiculous. Faurisson's contributions have been many many multiples of what Cole has done.

Around 28:45 he starts mocking a video of "some moron" trying to burn a leg of lamb. Maybe he's referring to Denier Bud's One-Third of the Holocaust? Although if so Cole's is intentionally misleading in his description of it. The point is not that it's impossible to burn a body on a pyre. Of course it's possible to burn a body! Rather, the point is that it requires a substantial amount of wood per body.

Around 45:00 he says he hasn't compromised his position. He emphasizes that he still thinks Auschwitz was not an extermination camp. Cole, Weber, and Irving all do this same sort of thing. They try to have it both ways by sticking to their guns on Auschwitz to retain at least some of their revisionist cred but then they've embraced Operation Reinhardt (which never received nearly as much emphasis as Auschwitz) so they can say they talk about how "nuanced" they are as opposed to the "deniers." But if you go back to the late 80s and early 90s, it's pretty clear these guys (especially Weber) didn't have this position back then. Irving once said that Auschwitz was the flagship of the Holocaust and if it goes down the whole thing goes down with it. When were any of these guys saying there were gassings in Treblinka in the early 90s? As far as I know they weren't. Of the three of them, Weber comes off the worst, in my opinion. The way he squirms around in his interview with Rizoli is absolutely painful. He didn't seem to really believe what he was saying and he kept appealing to the authority of David Irving to justify himself. It seems entirely inauthentic. Go watch him in his debate with Michael Shermer and the contrast is striking. I'm the most sympathetic to Irving who just seems like a defeated old man. Cole is the hardest for me to read. He pushes holocaust-lite with much more enthusiasm and much more effectively than either Weber or Irving, but I just can't believe that he's being honest with the arguments he's making. There's no way that he doesn't understand the problems with the alleged open-air cremations. Yet here he brushes off the issue with nothing but distortion and bluster.
Top

Archie wrote:In Cole's more recent interviews he goes to great lengths to distinguish between "deniers" and "revisionists." And he throws shade at pretty much everyone except for Weber and Irving (the other guys who share his holocaust-lite position).

Yes, one of those weird coincidences again. David Cole was a "denier" and then the Jewish Defense League (JDL) put out terroristic threats against him, and he went into hiding. Mysteriously he resurfaced as a Holocaust[-lite] believer. I suggest: https://codoh.com/library/series/the-da ... affair/en/

Irving, less than a decade after losing his libel suit, was physically assaulted (photo of his battered face) and imprisoned in Austria. He served 13 months of his 3-year sentence and was deported back to the UK, where he proclaimed that yes, he believes in the "Holocaust" because of some British documents or something. Suggested: viewtopic.php?p=96324#p96324 and viewtopic.php?t=4548

Weber is a weird case and it causes you to scratch your head a bit. The IHR was firebombed at one point and also taken over at gunpoint, which resulted in one of the founders (Willis Carto) establishing the Barnes Review. The IHR also has received very sizeable donations, in the realm of millions of USD. Weber, who was once part of Dr. Pierce's National Alliance, wrote an article in January 2009 entitled "How Relevant is Holocaust Revisionism?" where he said that Holocaust revisionism didn't achieve academic support and instead he wanted to focus on fighting "Jewish-Zionist power." In Weber's case, it could just be about the money.
I suggest: viewtopic.php?t=12847 (and the links I posted in my reply) as well as viewtopic.php?t=5294

Another thread related to this topic:

DAMAGE CONTROL: The New Holohoax Frontier
viewtopic.php?t=13022
"There is a principle which is a bar against all information, which is proof against all arguments, and which cannot fail to keep a man in everlasting ignorance -- that principle is contempt prior to investigation."

Ann Coulter often retweets Cole, since Cole has been writing for the kosher Takimag. Coulter was a friend of Joe Sobran, who wrote scathing criticisms of Jewry in his newsletter.

"In 2001 and 2003, Sobran spoke at conferences organized by David Irving and shared the podium with Paul Fromm, Charles D. Provan and Mark Weber" -- https://en.wikipedia.org/wiki/Joseph_Sobran

It's particularly interesting because Coulter often condemns the 2006 holocaust conference in Tehran. It almost seems like she and Cole are part of an operation, and that her enthusiasm for him didn't crop up organically.

She also likes to retweet the jew Paul Joseph Watson, who is on record dismissing Jewish influence: https://www.youtube.com/watch?v=26W-AQl2uZ4

Strange woman, that she likes Joe Sobran (who talked constantly about inordinate jewish influence), but at the same time is a fan of Cole and Watson.
Top

Coulter has complained about politicians pandering to Israel before. She has named Zionist Jews in Trump's White House and has accused them of blocking his attempts to halt mass immigration, among other things. If she said that the Holocaust was a lie, she would be very quickly discarded, widely condemned, and unpersoned. By pushing the narrative she has delayed that a bit, but not prevented it. I don't think Paul Joseph Watson is a Jew, but he will surely defend them at any opportunity. He gets to keep his social media accounts, for now at least.

Remember, not believing the standard Holocaust narrative is equated with a defense of Hitler and everything he is alleged to have done. They argue: if you don't believe millions of Jews were gassed, that must mean you want it to happen. It doesn't make sense but if you say it enough then a lot of people will believe it.
"There is a principle which is a bar against all information, which is proof against all arguments, and which cannot fail to keep a man in everlasting ignorance -- that principle is contempt prior to investigation."

Archie wrote: Cole is the hardest for me to read. He pushes holocaust-lite with much more enthusiasm and much more effectively than either Weber or Irving, but I just can't believe that he's being honest with the arguments he's making. There's no way that he doesn't understand the problems with the alleged open-air cremations. Yet here he brushes off the issue with nothing but distortion and bluster.

In additon to the reasons others here have given, I think it also supports his political views. He is a neo-conservative who supports all the senseless American wars in the Middle East. And the main justification, implicitly as well as explicitly, for these is the Holocaust myth. Terms like 'Axis of evil' and the atrocity propaganda with staged gas attacks are meant to remind people of 'never again' and the 'moral responsibility' to intervene.

Without some sort of holocaust the public support for these wars will completely evaporate.
They are afraid of words and thoughts; words spoken abroad, thoughts stirring at home — all the more powerful because forbidden — terrify them ... They make frantic efforts to bar our thoughts and words; they are afraid of the workings of the human mind
Top

A separate thread has been created for the discussion of David Cole's recent video:

Mark Weber and Ted O'Keefe did a California radio show back in 1990.
https://forum.codoh.com/viewtopic.php?f=2&t=1516

Close to the end (around 1:51:00) they start explaining that that there are revisionists all across the political spectrum, etc.

The host remarks that they probably don't have a lot of Jews.

Weber replies they've had four Jewish JHR contributors (as of 1990).

Then O'Keefe says "and we understand there are Jewish academics who are at least closet holocaust revisionists."

Presumably among Jewish academics there's a mix of 1) true believers, 2) those who know but are unabashed liars, and 3) a handful of closet revisionists. If we're talking Jewish academics broadly, I'd suspect most of them are #1. But among those with some expertise in the topic and who are familiar with revisionist material, it's hard to see how they wouldn't know. Or at least be aware that there are major problems.
Top
Post Reply
84 posts