It's definitely legit to expose Churchill's massive war crimes and deceptions, which of course go unmentioned in this article; but charges of "racism" by the openly racist by BLM?
Give me a break. 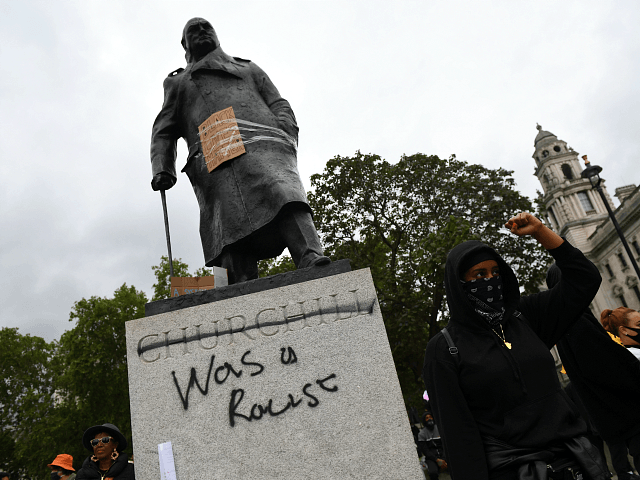 The legacy of Britain’s wartime leader, Sir Winston Churchill, is reported to have been under review at the Imperial War Museum, in the latest blow against British history amid the iconoclastic Black Lives Matter unrest.

Churchill has long been a target of ire for the radical leftist movement, which has accused the man credited with defeating Nazi Germany of being racist and a colonialist.

Internal emails seen by The Telegraph revealed that senior staff members of the Imperial War Museum said: “We must continue to have conversations around sensitive and difficult issues” and “We must have conversations in which we reflect upon and examine our own biases and preconceptions.”

Another email, which was obtained under a freedom of information request, said: “We should chat further about how we can look at Churchill’s views re: tackling sensitive topics too.”

“This is one I’m very keen to get ahead of,” the email added.

The discussions surrounding Churchill’s legacy were started by curators of the museum just days after Black Lives Matter vandals defaced his statue in Parliament Square in June.

The museum is home to the Churchill War Rooms, where the wartime Prime Minister organised Britain’s efforts to defeat Adolf Hitler and his allies.

In response to the revelation, the author of Churchill: Walking with Destiny, Andrew Roberts, said: “The IWM ought to remember that black lives mattered to Winston Churchill, which is why he fought to defend the empire on the northw-est frontier of India and to destroy slavery in the Sudan.

“It also needs to consider that there was a world war on during the Bengal famine.

“If this is just a woke box-ticking operation because of BLM, it ought to see the way ordinary people were furious with the way the National Trust tried to tie Churchill in with slavery in its recent notorious report.”

Black Lives Matter has targeted a swath of historical figures in Britain, including Admiral Lord Nelson, who has long been a target of leftists in the country.

Over the summer, BLM radicals in Britain also launched a campaign of vandalism, defacing or destroying statues of Queen Victoria, Sir Edward Colston, and even American president Abraham Lincoln, who was assassinated for the role he played in freeing his country’s slaves.

In August, the British Museum removed the bust of the museum’s founder, Sir Hans Sloane from its pedestal, in a move inspired by Black Lives Matter activism.

More recently, the National Trust placed Sir Winston Churchill’s former home — Chartwell in Kent — on a BLM-style shame list, because the location has links to the “sometimes uncomfortable role that Britain, and Britons, have played in global history.”

The majority of the British public, however, is against Black Lives Matter’s push to demonise British history, with 69 per cent saying that they were proud of their heritage, according to a poll from Policy Exchange in June.

On the question of Sir Winston Churchill, 80 per cent responded that his statue in Parliament Square should not be removed, with the poll finding there was “clear support for Churchill staying put across all age groups”.

The Imperial War Museum denied that it would “reinterpret” the Churchill displays, but said: “Like any world-leading museum, IWM is always considering how its complex subject matter is presented to audiences across all of its branches and is always prepared to answer any questions which may occur as a result of political or social protest.”