We all know that one of the usual answers to doubt of the holocaust claims when discussing it with a believer is the 'but I've seen all the bodies, how can you doubt it?'

Most regular readers here will know that a) it is officially recognised that no gas chambers were used in camps on German soil, b) the deaths in camps such as Buchenwald, Bergen Belsen etc were a very small fraction of the total claimed 6m dead and c) they were caused mainly by typhus and starvation due to the collapsing infrastructure in the closing months of the war. These figures may be on some interest to newer readers. Please remember that not all deaths were those of jews, thus they would and should not be counted as part of the 6m.

So here's a little review of figures of the well known camp deaths plucked from official and reliable sources, my emphases added,:

Camp records indicate that throughout its existence some 240,000 prisoners from at least 30 countries were confined at Buchenwald. At least 10,000 were shipped to extermination camps, and some 43,000 people died at the camp.11 Jun 2015
Buchenwald | concentration camp, Germany | Britannica.com
http://www.britannica.com/place/Buchenwald

The Dead of Buchenwald

Based on Nazi records and other evidence collected after liberation of the camp, the number of those who died or were murdered under the immediate influence of Buchenwald is no fewer than 55,000 victims.

There were no gas chambers at Bergen-Belsen, since the mass killings took place in the camps further east. Nevertheless, current estimates put the number of deaths at Belsen at more than 50,000 Jews, Czechs, Poles, anti-Nazi Christians, homosexuals, and Roma and Sinti (Gypsies).[7] Among them was Czech painter and writer Josef Čapek (estimated to be in April 1945).

During its existence, approximately 50,000 persons died in the Bergen-Belsen concentration camp complex including Anne Frank and her sister Margot, both of whom died in the camp in March 1945. Most of the victims were Jews.

Over the 12 years of use as a concentration camp, the Dachau administration recorded the intake of 206,206 prisoners and deaths of 31,951. Crematoria were constructed to dispose of the deceased.

In the twelve years of its existence over 200.000 persons from all over Europe were imprisoned here and in the numerous subsidiary camps

Note that when death tolls are sought for Dachau the info gets a bit thin. One site says 31,000 died but most sites don't give a figure. They all seem to agree on the number of living inmates on liberation at about 32,000.

Mass grave at Bergen Belsen. Note how large this excavation is for a few thousand bodies and compare that to claims of graves at Treblinka for a claimed 800,000+++ bodies.
BergenBelsen-DrKlein.GIF (44.69 KiB) Viewed 1022 times

Thus for these three camps the approximate death toll was a gross 120,000 approx. Not all were jews of course.
'Of the four million Jews under Nazi control in WW2, six million died and alas only five million survived.'

I'm sure you will agree there is an inherent problem with presenting 'a number.' As Hegwood wrote elsewhere here at CODOH-Forum: "The preservation of the lie is accomplished by presenting it as a mish-mash of place names and horror stories without ever connecting them."

Allow me to try connecting some dots (not that this hasn't been done before many times):

238,980 was the total number of inmates (not all at the same time). It seems bad to hear that 34,000 inmates died at Buchenwald. (I do not know the origin for their claim of ten thousand or more who 'were executed immediately,' to round out the estimate of 43,000 total dead [Britannica]. This seems undocumented in the German records.)

In context:
(1) Final Months' Collapse, not a 'Death Camp' Program. 40% of the deaths were in the final 100 days (January to April 11, 1945) of the camp's seven years and nine months' operation (July 1937 to April 11, 1945). The clear majority in the final six months of the war. Conditions fell apart in the final months, as we all know. This is why some of the inmates who were liberated were so malnourished. (The 'mish-mashers' will have you believe that they were deliberately starved in an extermination program, which I think many or most Holocaust-indoctrinated Westerners do vaguely believe, but is not part of the official story at all; those 'pictures of piles of malnourished bodies' is the best evidence most people have ever seen for the Big H.)

(2) Comparison to the Natural Death Rate. Records show something around 5% of Buchenwald inmates died from 1937 through summer 1944; then from fall 1944, winter 1944-1945, and spring 1945, many began to die. I don't have crude death rate statistics for Germany in the 1930s and 1940s on hand. I do have them for the U.S. in the early 1950s: 19.1 per 1,000 population. In other words, 1.9% of all people died in a given year. (Today the rate is 0.8% in the USA). Obviously, these are mainly older people and people with various ailments; the point is, some percent could be expected to die anyway, and some of the inmates imprisoned by the Nazis in Buchenwald may have already been elderly or ill (one class of prisoner is said to be homosexuals, who may have died early due to venereal disease, for example). Not knowing the prisoners' age profile or 'pre-existing' health conditions, I have to guess and conclude that five percent probably was excessive and reflected the harsh conditions in the camp, but nothing like the genocidal conditions alleged, and also a lot better than the gulags of the time.

(3) Comparable Losses to the Germans: The final death Buchenwald toll after the late-war collapse constituted 14.4% of those who had ever been imprisoned there, acc. to the meticulous official records. I would point out that a similar percentage of Germans (civilian and military) died early deaths in the 1940s, among other nationalities of central and eastern Europe swept up by the war and by the communist deluge.
The breeze is blowing
Top

The death stats at Dachau are well illustrated in this graph, which is part of Exhibit 8.3 in the Permanent Exhibition: 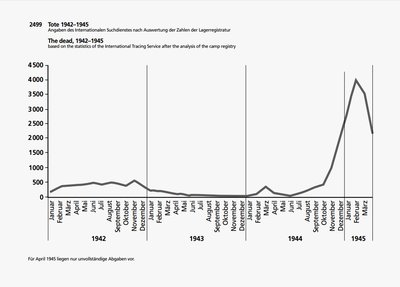 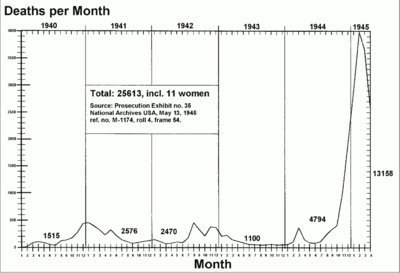 Graph of deaths per month for the Dachau concentration camp, 1940 to 1945, showing a dramatic increase in late 1944 due to allied carpet bombing 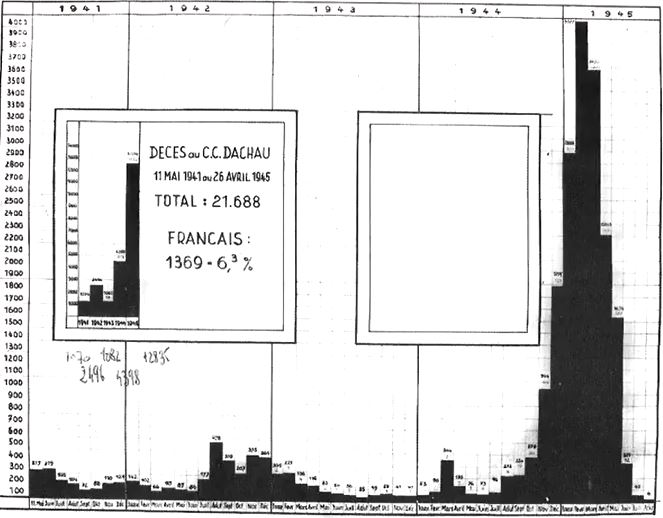 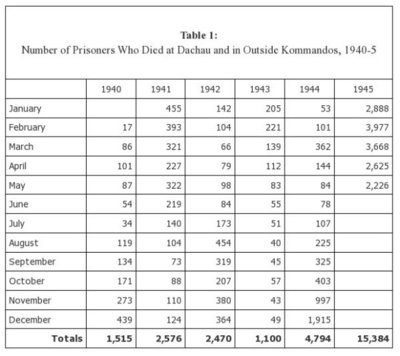 This, chart reprinted from page 281 of Berben’s “Dachau,” illustrates some interesting facts. Note that the death rate in Dachau fell slightly in 1942. In 1943 the death rate fell almost 50 per cent. In 1943 the death rate was at an all-time low, yet according to “exterminationist theory” the “final solution” should have been in full swing. In 1944, with the reappearance of typhus in the camp, deaths rose dramatically. Note that 66 per cent of all deaths at Dachau took place in the last seven months. It should also be noted that in the winter months of 1942-43 another typhus outbreak hit the camp. There is also an unusually high number of deaths for March 1944, due to Allied bombings of Kommandos which resulted in the deaths of 223 prisoners. 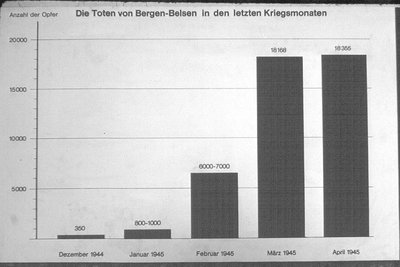 Germar Rudolf wrote:A summary from January 1, 1993 documents 296,081 deaths. The distribution of these deaths among the individual camps is shown in the accompanying table. Jews probably constitute about half of the total. One must keep in mind, however, that these cases are not all. The camps Chelmno, Belzec, Sobibor and Treblinka are missing from the table, as are the victims in the ghettos. And finally, one must remember that according to the Death Books approximately 66,000 people died in Auschwitz by late 1943 alone,[106] and that the Americans mentioned 25,000 dead in the concentration camp Dachau during the war.[107] A realistic estimate of the actual number of victims, therefore, may be twice as high as the total of victims registered by name in the records at Arolsen. The number of victims registered by name is now said to be about 450,000.[108] Doubtless the greater part of these are Jews, but exact figures are as yet unknown.

On the Revision of the Number of Victims at Majdanek
https://codoh.com/library/document/965/

In the summer of 1997, I conducted together with the Italian scholar Carlo Mattogno a research trip through Eastern Europe, starting in Lublin. Based on documents discovered in the archives of the Majdanek Memorial and of the Lublin Voivodship, on the official Polish literature on Majdanek, and on other sources, upon our return we published a book entitled KL Majdanek. Eine historische und technische Studie (Concentration Camp Majdanek: an Historical and Technical Inquiry) in German in 1998 and in English five years later, whose ambitious claim it was that of being the first ever work written about the Lublin Camp that satisfies scientific requirements.[11] In the book's fourth chapter the number of victims was calculated by Mattogno, who, in the light of the incomplete nature of the documentation, could naturally make no claim to absolutely exact figures. His numbers are given below, broken down by years:

Mattogno made no attempt to determine the percentage of Jewish prisoners among his calculated 42,200 deaths

Concentration camp Majdanek, A historical and technical study (chapter 4: Mortality)
PDF: http://holocausthandbooks.com/dl/05-ccm.pdf
TXT: https://archive.is/zT3e4#selection-2131 ... 131.175095
"There is a principal which is a bar against all information, which is proof against all arguments, and which cannot fail to keep a man in everlasting ignorance -- that principal is contempt prior to investigation."
-- Herbert Spencer
Top

"There is a principal which is a bar against all information, which is proof against all arguments, and which cannot fail to keep a man in everlasting ignorance -- that principal is contempt prior to investigation."
-- Herbert Spencer
Top
Post Reply
4 posts • Page 1 of 1