Murderers Among Us: Movie documentary 'piece of evidence'

Murderers Among Us: Movie documentary 'piece of evidence'

One of the first movies produced by Comrade Stalin in Germany after WW2 was the fiction movie Murderers Among Us. That movie staged a fictional German captain (Ferdinand Brückner) ordering the shooting of a hundred civilians on Christmas Eve of 1942 in a Polish village.

Shooting scene in Murderers Among US:

In order to lend credibility to their shooting scene, the makers of Murderers Among US even forged a fake execution order.

Shows how easy it was for the victors to manufacture any kind of 'Nazi documents' when/if needed. 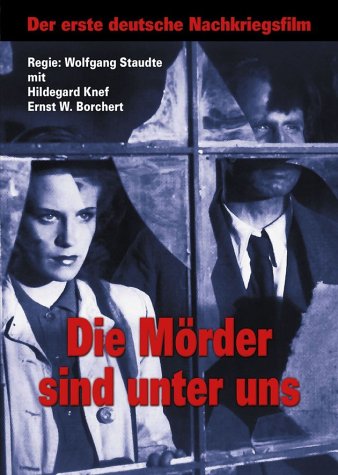 Die Mörder sind unter uns, a German film known in English as Murderers Among Us in the United States or The Murderers Are Among Us in the United Kingdom was one of the first post-World War II German films[1] and the first Trümmerfilm. It was produced in 1945 and 1946 in the Althoff-Atelier in Babelsberg and in Jofa-Ateliers in Johannisthal. It was written and directed by Wolfgang Staudte.

Berlin in 1945 after Germany's defeat in the war. The former military surgeon Dr. Hans Mertens (Ernst Wilhelm Borchert) returns home from the battlefield to find his home destroyed. He suffers from the terrible memories of the war and becomes an alcoholic. A photographer and Nazi concentration camp survivor, Susanne Wallner (Hildegard Knef), finds him living in her apartment as she returns home and they become roommates and even friends. Eventually, Mertens meets his former captain Ferdinand Brückner (Arno Paulsen), who had been responsible for the shooting of a hundred civilians on Christmas Eve of 1942 in a Polish village on the Eastern Front. He is now a successful businessman, producing pots out of old Stahlhelme, the German military steel helmet. On Christmas Eve, Mertens plans to kill him, but Wallner stops him at the last minute. They decide to have Brückner put on trial then, and the two start a new life together.

The film was shot in the ruins of Berlin. Originally the film was supposed to be named Der Mann den ich töten werde (The Man I will kill) and Mertens was supposed to succeed in killing Brückner, but the script and the title were changed because the Soviets were afraid that viewers could interpret that as a call for vigilante justice.

Murderers Among Us debuted on October 15, 1946 in the Admiralspalast, which was at the time the home of the Berlin State Opera, in the Soviet sector. The television debut in the German Democratic Republic was on November 1, 1955 and in the Federal Republic on November 18, 1971.

Typical Soviet 'subtlety:' On the table of Herr Bruckner lies a newspaper reporting the gassing of 2 million people at Auschwitz...

Pretty sure it wasn't this Ferdinand Brückner... Writer and Austrian stage director, born in Sofia (Bulgaria) in 1891, and died in Berlin in 1958. His father was an important Jewish banker who settled in Vienna, city in which Bruckner spent his childhood for a long time. In 1911, Bruckner, moved to Berlin, where he worked as a journalist and a publisher reader. Between 1917 and 1919 he edited the journal Marsyas. In 1922 he founded the Renaissance theatre of Berlin, which he directed until 1927. In 1933 he emigrated to Switzerland, later to Paris and, finally, to the United States. In 1953 he returned definitively to Berlin.

His first literary works are marked by expressionism. In the drama entitled Krankheit aus der Jugend (youth, 1929 disease), Bruckner manages to break definitively with the past, and that while the work, which has as its central theme the desperate situation of a young postwar no past and no future, presents even multiple expressionist character traits. Die Verbrecher (criminals), which has as its central axis "injustices" of which we know as "justice" is also from that same year. His most famous work, Elisabeth von England (Isabella of England), was represented for the first time in 1930. In 1933 wrote, as a reaction to power of Hitler, the work of anti-fascist tone Die Rassen (races). During the years of emigration was devoted mainly to discuss historical, as in Napoleon der Erste (Napoleón I, 1936). After the war tried to rehabilitate the genre of tragedy according to the classic, as in the works of Der Tod einer Puppe (the death of a doll, 1956) and Der Kampf mit dem Engel (the fight with the angel, 1956).

Re: Murderers Among Us: Movie documentary 'piece of evidence'

"Mertens was supposed to succeed in killing Brückner, but the script and the title were changed because the Soviets were afraid that viewers could interpret that as a call for vigilante justice"

Well, that was sure nice of them......the Soviets wouldn't want people going around taking vigilante "justice" on the Germans.....huh?
Maybe, just maybe, they believe what they are telling you about the 'holocaust', but maybe, just maybe, their contempt for your intelligence and your character is beyond anything you could ever have imagined. -- Bradley Smith
Top
Post Reply
2 posts • Page 1 of 1