How much support is there in Germany for abolishing "Holocaust Enforcement" laws?

How much support is there in Germany for abolishing "Holocaust Enforcement" laws?

In another thread, Hektor speculated that Germany's new AfD political party, which is expected to do well enough at the polls to enter the Bundestag in September, may use its new clout to lobby to ease or end the draconian Holocaust Enforcement laws:

Hektor wrote:
There was some debate on "historical memory" touching upon the Holocaust. Now I don't expect them to "deny the Holocaust", but they [the AfD, Alternative fur Deutschland Party] should insist on lifting any freedom of speech and research restrictions on the Holocaust subject. Ending the privileged status, if you want.

Of course, a marginalized, 'outsider' opposition on Germany's much-maligned "Dissident Right," to which the AfD belongs, cannot do it on its own, and will need CDU-SPD support, i.e. the Establishment. I believe the CDU and SPD may have more quiet support for getting rid of the Holocaust laws than we might think; as you will see below, I believe the SPD may be the more likely candidate for Holocaust Liberation.

I would like to know what other CODOH-Forum members think about this: How much 'quiet' support there is for an end to Holocaust Enforcement Laws?

Here is how I see the three current "second-tier" parties. 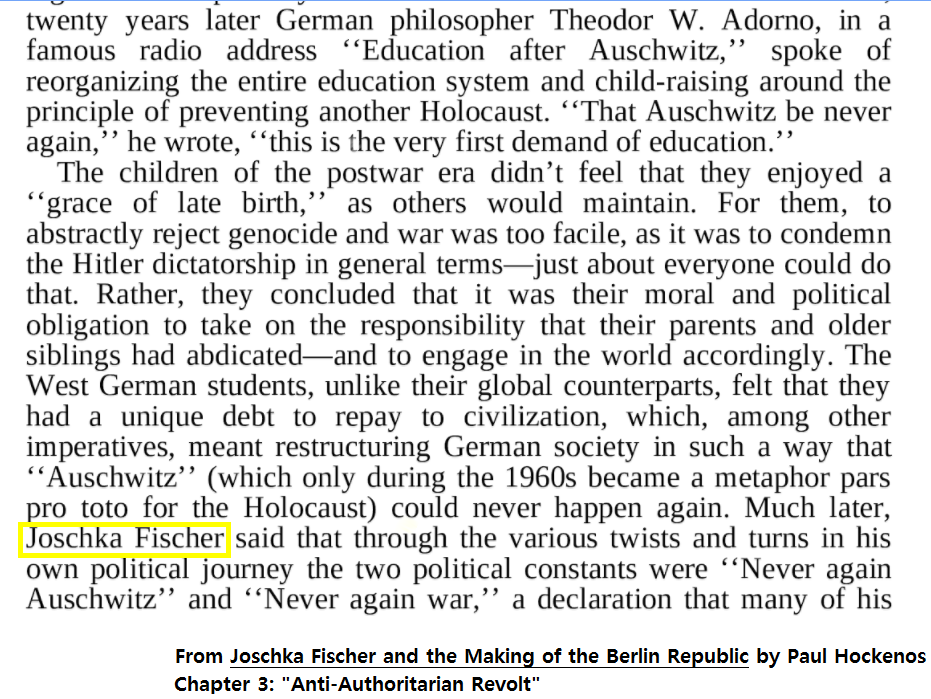 An even more caricatured version of this is is Gregor Gysi [1948-] (Die Linke) (former Communist apparatchik of the GDR) (according to Metapedia, he has partial Jewish ancestry):

The FDP
Their base may have free speech sympathizers, but unlikely the party bosses. Even if there are sympathizers in the party, I doubt they would ever actually fight for relieving Holocaust Enforcement.

We have to look to the so-called Volksparteien, or the Establishment. There is no other choice.

The CDU and SPD
My knowledge of German politics suggests that a sizable CDU faction is against these laws (call it the Ernst Nolte Faction), but also that few to none will speak out (for fear of prosecution, for one thing). The SPD, also, in my opinion, has such a faction, which is larger than one might expect.

In an earlier era, there was an "Egon Bahr Wing" of the SPD, which has mostly, by now, lost out to the pro-Holocaust elements of the new SPD in terms of leadership (the SPD itself has also lost most of its support since the Bahr era). Egon Bahr [1922-2015], part Jewish, is mainly remembered for his work as a kind of 'BRD's Henry Kissinger' in Ostpolitik of the 1970s under the SPD; from what I have read, he was actually a committed patriot and even a nationalist, of a kind. With this came desire for 'normalization.' By the 1990s, he argued that Germany could now be a 'normal country again' and ought not be 'held hostage' to Holocaust Thuggery; earlier in his career he wanted to distance the BRD from USA/NATO in this context, while the rival CDU were committed to, in Bahr's view, being a geopolitical U.S. satellite... 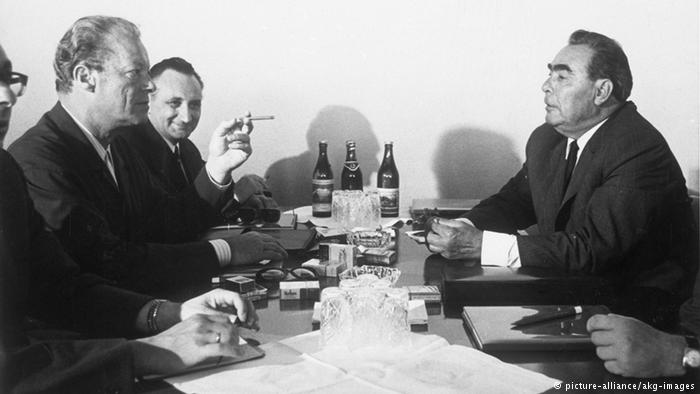 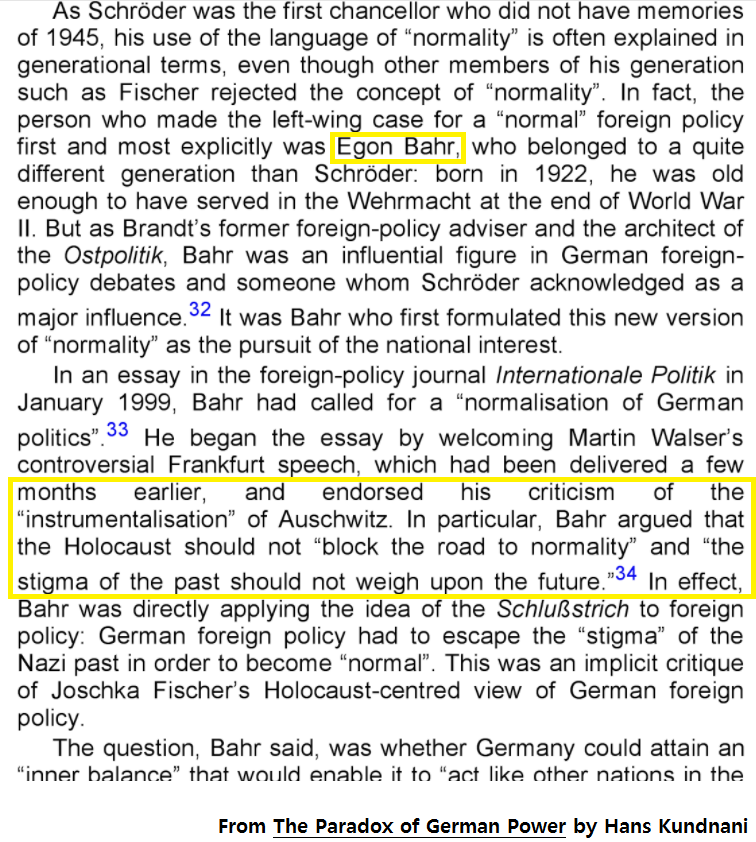 More recently, the case of Thilo Sarazzin, which many will remember. Sarazzin [1945-], a high-ranking SPD official, wrote a series of books, beginning in 2010, extremely critical of the late 20th century to early 21st century German political system; it hit to the very core, and the entire book was permeated, I think, with an implied criticism of Holocaustism. Being literally illegal, he said nothing directly about the Holocaust, but I believe it was consciously implied, in the way that hostages have to give coded signals to the outside world. 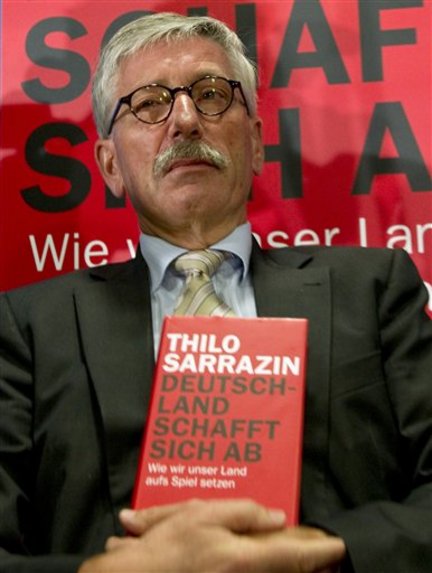 Does anyone agree with me that the SPD may be a source of salvation from discourse-control within Germany by Holocaust Thugs?
The wind is blowing

Re: How much support is there in Germany for abolishing "Holocaust Enforcement" laws?

I know nothing about this issue and have nothing to contribute, but I was very interested in what you wrote, Sannhet. Thank you for posting it.
Top

Re: How much support is there in Germany for abolishing "Holocaust Enforcement" laws?

A good start to analyse the political landscape in Germany, which is the critical state for the Holocaust dogma. The Anti-Holocaust-Investigation paragraphs were and are backed by a lot of vested interest including of the parties mentioned.

OK, there will be a mass of people that don't really care that much, if the Holocaust can be investigated freely (Which naturally includes publishing the findings without getting into "legal" or personal/professional trouble). So we can leave them aside. There is however tacit acceptance of jailing "Holocaust Deniers" for some reason among them. So don't count of them. They'll swing with whatever is gonna happen in the end..

Then you get those that are interested into subjects of historiography. And there are approximately three groups:
1. Those that have some doubts or are even convinced that there is something seriously wrong with the Holocaust Narrative as presented in the main stream media and within public academic institutions, no doubt they'll oppose jailing Revisionists. And may actually actively support lifting the ban.
2. Then there are those Holocaust believers that at least will pay lip-service to "Freedom of Speech". They'll say stuff like:"I disagree with jailing Holocaust Revisionists, in fact I would like to see the ban lifted so we can debunk them better." - I doubt they'll mean what they say. So I won't take them too seriously, but this can differ from person to person one is dealing with. Some say it to keep up a "liberal image", others may indeed mean it 3. Those that are convinced that the Holocaust happens or at least have a vested interest in the present version or type thereof. They've no problem with violence against Revisionists (which is in fact what 130 prosecutions and subsequent punishments are). In fact, they'd go even further, if they could do so without excessive risk. Fortunately they're mostly cowards in that.

Bear in mind that impairment of Revisionists in Germany works at least two-fold. There is the threat of violence in "legal", but also extra-legal form. And there is the ostracism or active destruction of ones civil life: Loose your job, get excluded from associations, lose opportunity on publishing, research, academic careers, etc. The later may be in fact the stronger restraint, but it is certainly enhance by the former in a legalistic-authoritarian nation like Germany.

You may find representatives of all three groups in parties, academia, publishing, civil society organisation (which are often tax supported). They're just not open at present, at least group 1 and group two to a lesser extent. But group three swings the scepter at present in all of them. The reason for this is simple. The Holocaust Mythology offered a justification for a number of policies or behavior, which otherwise are difficult or not to be justified at all. Just to name a view:
- There is the problem of the Elites being post-WW2 installments by the Allies (both East and West). Demonizing Hitler and National Socialism and actually Germany as a whole prevents a debate on their legitimacy.
- Bowing down to European Union. Germany is the country transferring most money and power towards Brussel. Doubt that could be done without disparaging German Nationalism, of which National Socialism is a part of. And there the Holocaust is very handy.
- Repopulating Germany with foreigners. That's easy: Hitler was a racist, Hitler gassed six million Jews, because he was a racist. Opposing genetic displacement genocide is racist and anyone doing it wants to kill-six-million-Jews or an equivalent thereof.

There was/is quite some disgruntlement about the whole Holocaust thing among Germans. Some realize it is a shaming exercise to hold them down politically, others sense that there is something fishy about the stories around the Holocaust, but can't put the finger on it with certitude. Now the politicians and media conman are quite aware of this. They refer to this as Stammtischparolen (=bar table talk). It's a useful inconvenience to them. Simply because certitude in the matter can only come from authoritative academic research, which of course would require resources the ordinary German won't have. And if you want to make your academic career in History difficult in Germany, express doubt on the Holocaust Myth openly. You may of course cast some doubt on single Holocaust tales without taking major damage from it. But guess what, this serves to add credibility to the canonical Holocaust, making it more believable to the gullible in total.

Career politicians or journalists sense of course what is at stake for them, so they'll act accordingly. The jailing of Revisionists is still some embarassment to them, since they pretend to be "democratic", "liberal" and the like. It exposes them as tyrannical almost medieval zealots about an issue that is a stigma on their nation by that. Pushing the issue can help stirring the pot. But it takes more people with courage and many of us know that it is a pot one can burn ones fingers with.

There is a substantial amount of Germans that would like to see political change of some kind. Unfortunately many of them realize the key role the Holocaust plays in their mental enslavement. They'll argue stuff like:"We shouldn't be too focused on the past, but must solve present issues". Sounds legit? Maybe, but it's dead wrong. The past is the key to the present and with that the future here. You got to hit the Gordian knot first to get somewhere and the more people realize it, the better. The thing is that the Holocaust isn't just a historical issue for ivory tower academics, it isn't even that political, although the present elites made it a political one. It's a metapolitical issue, which is a pillar of the present power structure. If that crumbles it will become a game changer.

Now think about that for a while. The AfD is itchy with the whole thing. On the one hand they realize that the Holocaust Myth is an obstacle to them, on the other hand pushing the issue too much will frighten "bourgeois voters". So it's going to be tricky, but it has to happen.
Top
Post Reply
3 posts • Page 1 of 1