The complete destruction of the absurd & impossible Auschwitz 'gas chambers' by revisionist scholars has the corrupt "holocau$t Industry" by the neck. This fact is not new to the seasoned free speech, Revisionist activist.

The "Industry" has been and is in a state of panic. Their desperation is reflected in their need to continue to lie.
Have a look at what they have resorted to. See a review of 'holocaust' frauds like Richard Green, the Kraków Institute of Forensic Research, and James Roth. Witness their demolition before your very eyes.

See the link below for much more, plus links to the video and the complete book, I've copied the Conclusion.

If the alleged ‘holocaust’ was fact, then why are there laws in Europe to prevent scrutiny of it?
What kind of “truth” needs to imprison people to prevent free speech?

The Chemistry of Auschwitz/Birkenau
By John Wear 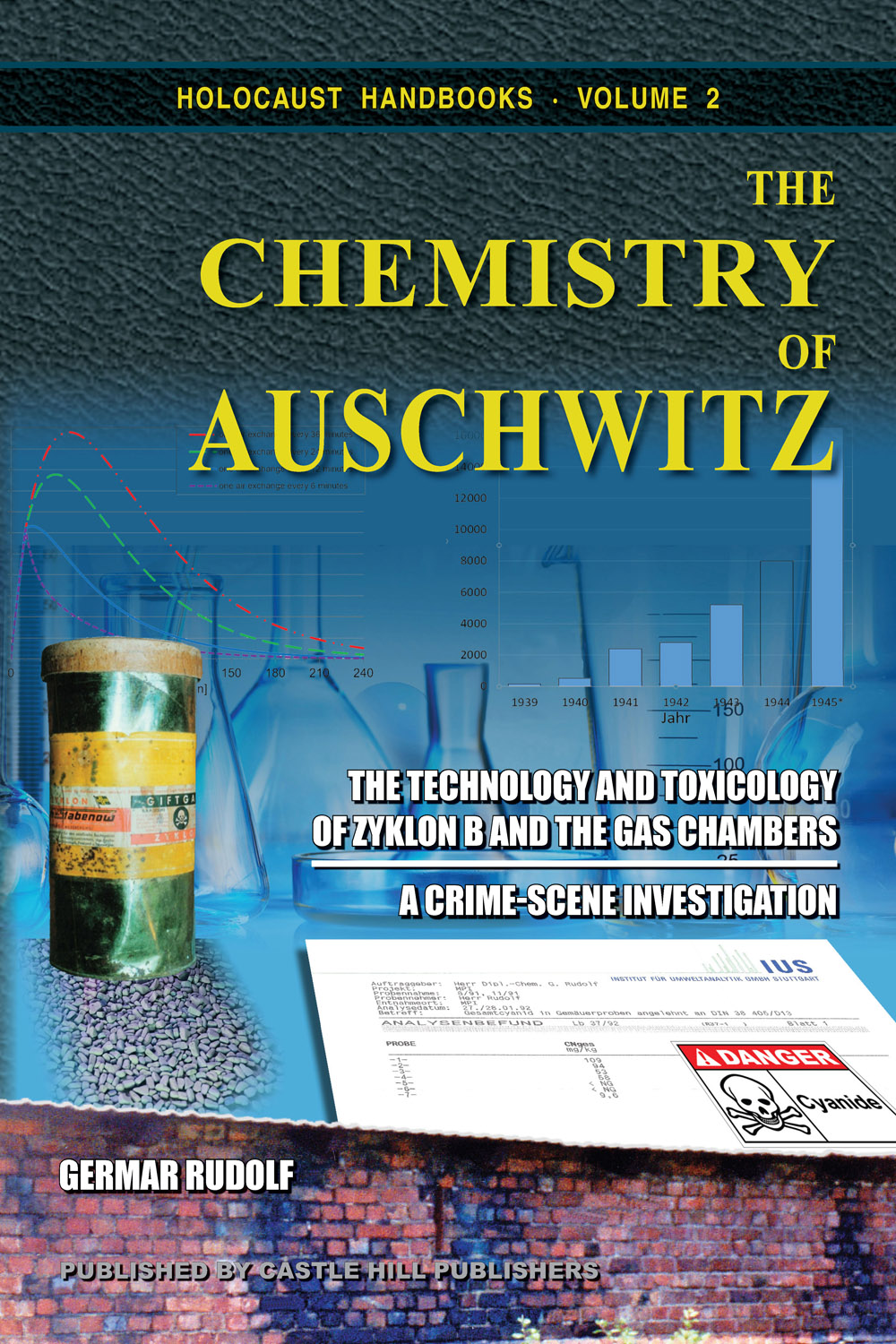 The alleged homicidal gas chambers at Auschwitz/Birkenau could not have been used to exterminate hundreds of thousands of people as described in pro-Holocaust literature for numerous reasons:[21]

By contrast, Germany built highly sophisticated and expensive disinfestation facilities at Auschwitz/Birkenau to kill lice and save inmate lives. By one estimate, the SS at Auschwitz spent almost $1 billion in today’s values to bring the typhus epidemics raging there under control.[22] An enormous amount of information exists concerning these German delousing facilities[23], but no similar information exists regarding the alleged homicidal gas chambers at Auschwitz/Birkenau.[24]

The roof of the semi-underground Morgue #1 of Crematorium II at Birkenau, which is said to have been the building’s homicidal gas chamber, remains intact to some degree today. Contrary to eyewitness testimony, that roof has no Zyklon-B-introduction holes. This has been acknowledged by pro-Holocaust researcher Robert Jan van Pelt. Since it is impossible to close holes measuring 70 x 70 cm from a concrete roof without leaving clearly visible traces, it is certain that no Zyklon-B-introduction holes ever existed at Crematorium II. Consequently, Zyklon B could not have been introduced through the roof at this morgue as alleged by pro-Holocaust supporters.[25]

As documented in this article, chemists adhering to the orthodox Holocaust narrative have failed to explain why the walls of the delousing facilities at Auschwitz/ Birkenau are permeated with Prussian Blue, while nothing of this sort can be observed in any of the alleged homicidal gas chambers. The only reasonable explanation is that Zyklon B was never used in the alleged homicidal gas chambers at Auschwitz/Birkenau. Nicholas Kollerstrom writes:[26]

“[…] for any alleged human gas chamber found in a German World War II labour camp let us merely measure cyanide in the walls: if it’s not there, it didn’t happen.”

The opposition to the Rudolf Report* is just totally absurd... Can't understand how Zyklon can leave blue discolouration or any trace (?), A test which cannot detect cyanide proves the levels are the same for alleged and non alleged walls of facilities, not distinguishing between cyanide compounds when (a) he did and (b) there weren't any to distinguish, less sensititive tests than orthodox one which essentially shows the same thing, that traces the same as ordinary structures somehow shows they were used as gas chambers and that the blue discolouration was due to quote "wall paint" (?)

How can anybody possibly believe!?!?

A global multi billion dollar effort and this is the BEST that can be done to combat the truth?

The Amazon and Barnes and Noble Censorship is in reality a white flag of total unconditional surrender on the academic front.