Did Hitler consider Slavs / Eastern Europeans to be "Subhuman" or racially inferior?

Did Hitler consider Slavs / Eastern Europeans to be "Subhuman" or racially inferior?

It is generally claimed that Hitler tried to exterminate Jews, but then also other ethnic groups such as Gypsies and Slavs.
The claim is that he believed these people to be racially inferior, "Sub-human" or "Untermensch" - but is there any evidence?

Slavs are Indo-European people who speak the various Slavic languages of the larger Balto-Slavic linguistic group. They are the largest ethno-linguistic group in Europe, but Slavs are also found in parts of Asia.

According to Nazi ideology, Slavs were useless subhumans. As such, their leaders, the Soviet elite, were to be killed and the remainder of the population enslaved or expelled further eastward. As a result of these racist fantasies, millions of Soviet civilians were deliberately killed, starved, or worked to death. Millions of others were deported for forced labor in Germany or enslaved in the occupied eastern territories. German planners called for the ruthless exploitation of Soviet resources, especially of agricultural produce. This was one of Germany's major war aims in the east.

Some maps showing where Slavs are in Europe, and also phenotype I will come back and post some research I have done on this topic, after I do a bit more reading.


In the meantime, some related threads:

Were Americans more anti-Semitic than anti-German during WWII?
viewtopic.php?t=12464
"There is a principal which is a bar against all information, which is proof against all arguments, and which cannot fail to keep a man in everlasting ignorance -- that principal is contempt prior to investigation."
-- Herbert Spencer
Top

"Aryan" used to be synonymous with 'Indo-European' and only after Hitler's use of the term was it considered something different. In contrast to Gypsies/Romani and Jews, who are Indian and Semitic respectively, virtually all Europeans are Indo-European or "Aryan". Obviously, some "racist" things were said against Slavic groups when Germany was at war with them, but Slavs were not considered an inferior race by the National Socialist Germans.

Now, on to the German views of European races: These six races [listed above] are called Aryan according to our legislation. Aryans, therefore, are the people of Deutchland who belong to one of these six breeds, or who carry the genetic resources of these races mixed. (Not Aryans, on the other hand, are the Orientals and the Near Eastern, or crosses of these two with other races, as represented by the Jewish people.)

According to German Ahnenpaß law:

Aryan descent (German blooded) is thus a person who is free of foreign blood, as seen by the German people. The blood of Jews and Gypsies also living in Europe, that of the Asian and African races and the Aborigines of Australia and America (Indians), are considered as foreign. For example, if a Englishman or a Swede, a Frenchman or a Czech, a Pole or an Italian, is free of such foreign blood, he must be regarded as Aryan, whether he lives in his native country or in East Asia or in America or he may be a US citizen or a South American Free State.

German blood does not form its own race. The German people are made up of representatives of different races. But all these races are characterized by the fact that their blood is mutually compatible and a mixture of these blood, unlike blood that is not related to them, does not create obstacles and strains.
To the German blood, you can, without a doubt, equate the blood of those peoples whose racial makeup is related to the German people. This applies to all people inhabiting the lands of Europe. Blood, related to German, is equally considered in all directions. Therefore, the citizens of the Empire can become representatives of minorities living in Germany, for example, Poles, Danes, etc. 
The following map was made by Ewald Banse based on the research from:
Hans F. K. Günther (1922) Rassenkunde des deutschen Volkes As you can see, Europeans/White people are a mix of the six "Aryan" races, with Slavs mostly a mixture of East Baltic and Nordic. Racial composition of the German people:

Question: Is it true that the Germans referred to the Russians as "subhumans"?

Answer: Nonsense! The Russians are human beings just like everyone else.

Your question, whether we called the Russians "subhumans," is nonsense. We had a first-class relationship with the Russian people. The only exception, which was a problem we dealt with, was with the Soviet Commissars, who were all Jews. These people stood behind the lines with machine guns, pushing the Russian soldiers into battle. And anyway, we made quick work of them. That was according to order. This was during a war for basic existence, an ideological war, when such a policy is simply taken for granted.

There was sometimes talk about the so-called Asian hordes, and ordinary soldiers sometimes spoke about subhumans, but such language was never officially used. 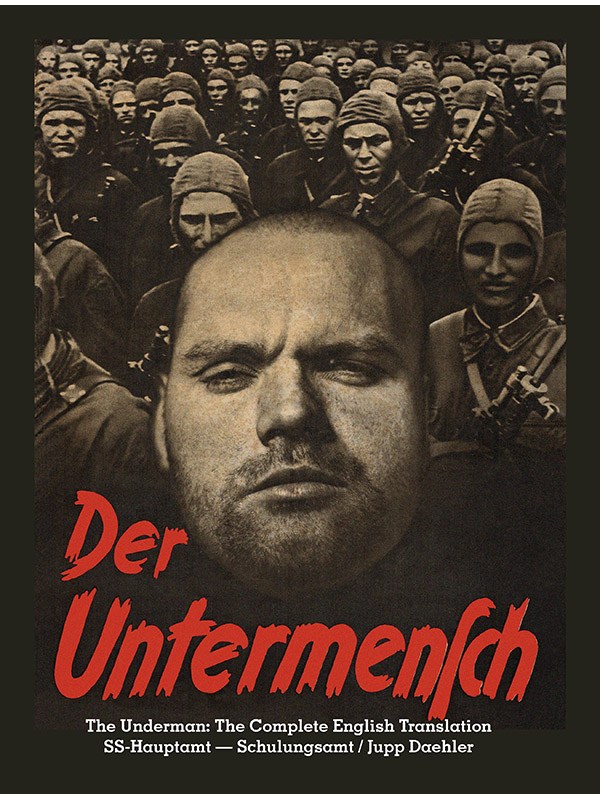 The English translation of the famous pamphlet "Der Untermensch" (shown above) says in the description:

Far from being anti-Slavic, the reader will see that the SS Head Office publication portrayed Russians as victims of Communism—and then specifically blamed Jews as being behind Communism, and, ideologically speaking, inheritors of a far older, far eastern attack on Europe which had started with Genghis Khan and the Mongols. Nowhere in the SS book are the Slavic people denigrated, and in fact many of the traditional Slavic nations are mentioned in text and photograph as being part of the greater European family. [...] The suffering of ordinary Russian people under the Soviet system forms a large focus in this work, and at all times great sympathy is evoked for these victims of Communism: men, women and children alike. Special mention is made of their awful living conditions, inflicted by the Soviet economic collectivization system, and always condemned only as the result of Communism.

In his speech of 28 April 1939, Hitler spoke highly of the Czech people. As for the Untermenschen, here is what Hans Fritzsche stated at the IMT:

While the term Untermenschen was used, it was never officially sanctioned – Alfred Rosenberg confirmed this.


Another good article on the topic:

Historically, Hitler’s view of the Slavic peoples was contentious and adversarial. It is not difficult to find hostile and aggressive remarks concerning the Slavs in both Hitler’s formal writings as well as in his informal discussions. In Mein Kampf, he ascribes his youthful awakening as a folkish nationalist to the ethnic struggles that he himself experienced between the Slavic Czechs and the Germans within the Austro-Hungarian Empire.

Hitler’s attitude towards the Slavs, however, especially after 1938 or 1939, matured. He recognized, for example, that were large segments of the Czech and Slovenian Slavic peoples that were racially valuable and he eagerly anticipated incorporating them into his post-war Greater Germanic Reich. Words and theories are all very well and fine, and should by no means be undervalued. But in the world of facts, it is actions alone that count, not intentions.

James Murphy is responsible for a very bad translation of Mein Kampf, to which, ironically, he wrote a fine introduction. In it, he comments on the evolution of Hitler’s thought over the years:
“Why doesn’t Hitler revise Mein Kampf? The answer, as I think, which would immediately come into the mind of any impartial critic, is that Mein Kampf is a historical document which bears the imprint of its own time. To revise it would involve taking it out of its historical context. Moreover, Hitler has declared that his on-going acts and public statements constitute a partial revision of his book, and are to be accepted as such.” (p. 10). James Murphy, translator of Mein Kampf.

To understand Hitler’s thinking on the Slavs after it matured we need to look at the actions he took and the policies he enacted during Churchill and Roosevelt’s war against the Reich.


So in conclusion, it is quite obvious that Hitler did not see Slavs as non-Aryan (except those with Mongoloid/Asian admixture, such as in parts of Russia) or racially inferior.
"There is a principal which is a bar against all information, which is proof against all arguments, and which cannot fail to keep a man in everlasting ignorance -- that principal is contempt prior to investigation."
-- Herbert Spencer
Top

Well done, Lamprecht.
The "sub-human" lie is used as a 'holocaust' narrative gateway.
It's a crude form of vote buying by "The Holocaust Industry".
It helps the naive to accept the fake claim of "6,000,000 Jews and 5,000,000 others" while it encourages eastern Europeans to make false claims which allows them to grab hold of the cherished 'woe is us' victim status.
And then, of course, there's always the money / 'reparation$'.

"Action makes propaganda's effect irreversible. He who acts in obedience to propaganda can never go back. He is now obliged to believe in that propaganda because of his past action. He is obliged to receive from it his justification and authority, without which his action will seem to him absurd or unjust, which would be intolerable. He is obliged to continue to advance in the direction indicated by propaganda, for action demands more action."

Various Slavs and other ethnicities in volunteer units: 14th Waffen Grenadier Division of the SS (1st Galician) - World War II German military formation made up predominantly of military volunteers with a Ukrainian ethnic background, later also with Czechs and Slovaks.
"There is a principal which is a bar against all information, which is proof against all arguments, and which cannot fail to keep a man in everlasting ignorance -- that principal is contempt prior to investigation."
-- Herbert Spencer
Top
Post Reply
5 posts • Page 1 of 1