German Philosopher and biologist has written a revisionist book on the second world war. Dahl is a specialist in bioethics.

Wikipedia says this about him, please use google translate!

The book squarely puts the blame for the outbreak of WW2 on President Roosevelt. The title is "Das erste Opfer des Krieges ist die Wahrheit: Wie die USA den Zweiten Weltkrieg planten"; in English: "The first victim of war is the truth: How the USA planned world war 2."

I am currently reading this rather short booklet. It is well written and contains lot's of references and logical arguments. Thus, it is a scientific work that does appeal to the broader public. Here is an interview with Edgar Dahl (for all those who understand German):

The "ExpressZeitung" published in Switzerland has devoted a whole issue to the first and second world war. After having read short excerpts I can conclude that this revisionist literature which disputes the claim that Germany was mainly responsible for the two world wars. I have ordered the issue and shall talk about it's content in my following posts:

Well known journalists of the alternative media; Oliver Janich and Gerhard Wiscnewski as well as Hagen Grell, have praised this issue of "ExpressZeitung", which means that WW2 revisionism is moving into the mainstream of the alternative media in Germany, like 9/11. I suspect that they are well aware of holocaust revisionism but do not talk about it for obvious reasons. They don't want to risk their freedom.

https://shop.expresszeitung.com/shop/sh ... _28_1.html
If liberty means anything at all, it means the right to tell people what they do not want to hear.
Top

New German biography of Adolf Hitler provoked a controversy. The author claims not to be 'revisionist', most likely to avoid the association of the word, but in reality it seems the work is thoroughly revisionist in nature considering the hostility to it, and the fact barely any publishing houses in Germany would touch it with a 10 foot pole. 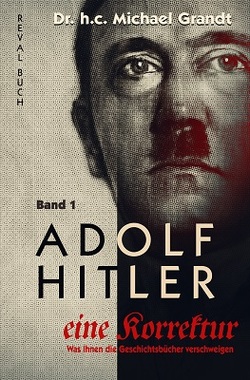 Very good for revisionism if the author manages to compile the series which 'radically contradicts the current picture of history and is therefore dangerous for the politically correct establishment." as he claims. Now. He isn't a holocaust revisionist it seems, but this would mainly benefit revisionism in the interwar years, and peacetime years of the Third Reich it seems. It's still up in the air, but something about it seems promising, for anyone who can read German I think it would be interesting to see what they think.

Here are some articles about the book. It's in German, and I think like many others it probably won't ever see the light of day in English.

http://www.michaelgrandt.de/brisantes-hitler-buch-wird-zensiert/
Now what does it mean for the independent expert witness Van Pelt? In his eyes he had two possibilities. Either to confirm the Holocaust story, or to go insane. - Germar Rudolf, 13th IHR Conference
Top

Fremdbestimmt / controlled by an alien power

Revisionist work on both ww1 and ww2 published by "Silberjunge", author of best sellers in Germany.

The title of the book is "fremdbestimmt" meaning controlled by an alien power, insinuating that the country is not governed by the elected politicians...

The book does not question the Holocaust, it offers a mainstream intentionalist account, which is quite superficial...

The book can be ordered here:

https://fremdbestimmt.com/
If liberty means anything at all, it means the right to tell people what they do not want to hear.
Top
Post Reply
3 posts • Page 1 of 1