".....if the Nazis cared about the lives of the people pictured, they should have freed them"


If the Jews behind Churchill and Roosevelt cared about the people pictured, they shouldn't have started the war; Churchill and Roosevelt were puppets In the hands of the Jewish Banksters, financiers, and mass media owners who started the war of total destruction against Germany.....why didn't they order the saturation bombing to stop?
Then food and medical supplies could have reached the camps.

Answer.....they didn't give a crap about their disposable "brethren".

"One cow in Palestine is worth more than all the Jews in Europe". -- Yitzhak Gruenbaum

" think it is necessary to state here – Zionism is above everything. I will not demand that the Jewish Agency allocate a sum of 300,000 or 100,000 pounds sterling to help European Jewry. And I think that whoever demands such things is performing an anti-Zionist act" -- Yitzhak Gruenbaum
Maybe, just maybe, they believe what they are telling you about the 'holocaust', but maybe, just maybe, their contempt for your intelligence and your character is beyond anything you could ever have imagined. -- Bradley Smith
Top

hermod wrote:The biggest manipulation in this case is the distortion of the cause of those inmates' death. The Allied 'liberators' secured great evidence of mega-epidemics raging in the collapsing Third Reich. But the democracies' Establisment will never admit that. Those dead bodies are too useful as alleged "victims of Nazi barbarity". Israël and the Western multicultural societies wouldn't survive such a concession...?

Really? A lot of these people weren't German by nationality. They were Poles, Hungarians, etc. And yes, some Germans as well. But in the case of virtually all of them, they were unjustly taken into Nazi custody -- in the case of the Jews, the religion of their grandparents was pretty much the only unifying trait that they shared. And while in Nazi custody, they died. Who, therefore, bears the greatest responsibility for their deaths, if not the Nazis?

Unjustly? Funny to see that all Jews are always allowed to turn the world into a bloodbath but that nobody is never allowed to touch one hair of any Jew. The Jews were imprisoned as justly as the Japs living in America at that time, as members of an enemy people.

And who bears the greatest responsibility for the tens of millions of deaths caused by mega-epidemics of WW1 and its aftermath (Spanish flu, typhus, etc.)? Young Corporal Hitler?

Nothing new. "Pestilence" (i.e. epidemics) has always been the most murderous of the Four Horsemen of the Apocalypse raging in all wars of the past. No need to steal Palestine from its legitimate owners for normal war-linked epidemics.

If it's about who is responsible for epidemics and who is not, why do mainstream media and orthodox historians almost never mention diseases when such pics are used? Why do they always blame such pics on starvation and gassings?
"But, however the world pretends to divide itself, there are ony two divisions in the world to-day - human beings and Germans.” – Rudyard Kipling, The Morning Post (London), June 22, 1915
Top

The train. It seems fishy. Around 1,000 dead bodies. Not one survivor? Yes some will die sooner than others but not one person still alive? Box cars wide open? 1st Lt. William Cowling "Many of the bodies had bullet holes in the back of their heads." That doesn't make sense with the story.

Jewish historian Robert Abzug mentions the head SS man Skodzensky, but there's no record that he ever existed according to scrapbookpages.com

Over and over again, these soldiers would say that they did not know why they were fighting this war until they saw Dachau and the Death Train.

If that was a general attitude among the troops, well it certainly was, maybe OSS or Psych Warfare tried to set something up, like they did at Ohrdruff.

And if memory serves, people who became famous film directors and were known to be in the OSS, are heard offering testimony as signal corps photographers, and they're talking about Dachau? That I would need to research to back that up, but I believe I've seen that. George Stevens? later directed James Dean in Giant.
Top

Sorry K0nsl, but I think the 'American brought corpses to Dachau and Buchenwald for propaganda purposes' claim is completely ridiculous and will have the anti-revs laughing.

In lieu of the curious 'Dachau death train' it looks like Kunsl is doing the laughing.
As CCS has pointed out, US movie directors on the scene, planted 'evidence', absurd unsupportable claims speak to the stagecraft employed in order demonize the Germans, hence distract from the very real Allied war crimes and attempt to lend credence to the fabricated, impossible tales of 'gas chambers & 6M'.

Revisionists are just the messengers, the absurd impossibility of the 'holocaust' storyline is the message.

Kingfisher wrote:Thames (I respect the conventions of this forum and your choice to, like me, to use a pseudonym), whether deliberately or not you are confusing and conflating different issues. Hermod correctly pointed out that the awful pictures from Belsen and other Western camps are routinely and dishonestly presented as evidence of Nazi extermination and deliberate brutality. You, however are informed and intelligent enough to know that the events today known as the Holocaust, whatever their real nature, took place elsewhere. You know as well as I do that these scenes resulted from loss of control through overcrowding and breakdown of infrastructure in the total collapse of Germany in defeat.

First of all, these people are every bit victims of the Holocaust as those elsewhere. I fail to see the distinction.

Second, if the Nazis cared about the lives of the people pictured, they should have freed them. That they didn't is blood on their hands.

Of course you see the distinction between deliberate and selective extermination of an ethnic group (aka The Holocaust TM) and deaths arising from a combination of chaos and mismanagement in the total logistic collapse of a country under enemy bombardment, defeat, sacking and occupation.

As for freeing these prisoners, it might have helped the prisoners to leave them free to roam and fend for themselves, though even that is disputable, but would have meant turning diseased and vengeful mobs loose upon the civilian population as happened with Eli Wiesel and his gang of rapists and plunderers in Weimar. Non-starter. The Allies maintained the camps closed when they took over for this very reason.
Top

Thanks for your response! You should keep in mind it's only a curious and entirely possible scenario presented by me. The article which I linked to mention Americans transporting away German victims — not to Dachau or any other KZ specifically, true. But what did the Americans do with these corpses and why were they transported away and for what purpose?

As for emaciated corpses: many German soldiers and civilians were in a similar state. For example, picture these two SS men naked: 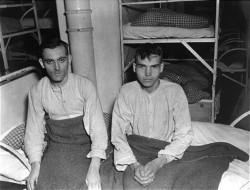 Those two men were imprisoned by the Americans at Hadamar. I am sure if you search around a little, you, too, can find many cases of emaciated German men, women and children. One example would be to search around for 'Rheinwiesenlager ' which were operational already sometime in April, 1945.

TheBlackRabbitofInlé wrote:Sorry K0nsl, but I think the 'American brought corpses to Dachau and Buchenwald for propaganda purposes' claim is completely ridiculous and will have the anti-revs laughing.

The Americans certainly used what corpses they found there for propaganda purposes; stacking them up in and around the crematoria for politicians, journalists, cameramen and Joe Public to see. Denierbud showed in One Third how the corpses at Ohrdruf were left out in the spring sunshine for weeks so that as many US troops as possible (who were ordered to visit) would see them and realise 'why they were fighting.'

All the corpses in the Buchenwald and Dachau footage are severely emaciated, meaning they likely died from typhus, and were very unlikely to be the bodies of duty-fit German soldiers who died from bullet wounds.

I'm a programmer, server administrator, designer, spokesman and factotum of a wide-variety of web pages.
Top

Kingfisher wrote:As for freeing these prisoners, it might have helped the prisoners to leave them free to roam and fend for themselves, though even that is disputable, but would have meant turning diseased and vengeful mobs loose upon the civilian population as happened with Eli Wiesel and his gang of rapists and plunderers in Weimar. Non-starter. The Allies maintained the camps closed when they took over for this very reason.

In fairness to Elie, he claims that he remained "at home" in the camp on the day his Buchenwald homies went out to rape girls after "liberation." He does say, however, that he was disappointed they didn't kill anyone, lol.

I'm not sure what to think of the train, but one thing to keep in mind is none of the shenanigans at Buchenwald or in the Merkers mine would have happened if the Allies knew they were going to find the horrific scene at Belsen. They thought they had to create this stuff because they weren't going to find anything bad. So if the Dachau train was a set-up, it would have been planned before this knowledge also.

Also I've never heard of anyone ID'ing any of the dead on the train. Stuff in pockets? Tattoo numbers from Auschwitz?
Top
Post Reply
23 posts