Further Confirmation of Torture to Extract "Confessions" / from the horse's mouth

Further Confirmation of Torture to Extract "Confessions" / from the horse's mouth

This is another installment in debunking the easily refuted claims of voluntary German "confessions".

Whether it be the admission of torture by the torturers or the impossible and absurd nature of the contents within the so called "confessions" themselves, exposing the widespread Allied torture of Germans is another nail in the coffin of the 'holocaust' storyline.

Now if Stalin had no qualms in applying torture to citizens of the USSR, there can be no doubt that the Soviets and the countries dominated by them used torture as a matter of policy to extract "confessions" from Germans during and after the war.

From the horses mouth.
Read on.

Khrushchev on how Soviets obtained "confessions"

Nikita Khrushchev on February 25, 1956, making his famous speech to twentieth
Congress of the Communist Party of the Soviet Union in which he denounced Stalin

"In the speech Khrushchev revealed how the Stalinist regime forced: "a person confesses to crimes which he has not committed."

When Stalin said that one or another should be arrested, it was necessary to accept on faith that he was an “enemy of the people.” Meanwhile, Beria’s gang, which ran the organs of state security, outdid itself in proving the guilt of the arrested and the truth of materials which it falsified. And what proofs were offered? The confessions of the arrested, and the investigative judges accepted these “confessions.” And how is it possible that a person confesses to crimes which he has not committed? Only in one way – because of the application of physical methods of pressuring him, tortures, bringing him to a state of unconsciousness, deprivation of his judgement, taking away of his human dignity. In this manner were “confessions” acquired.

The wave of mass arrests began to recede in 1939. When the leaders of territorial Party organizations began to accuse NKVD workers of using methods of physical pressure on the arrested, Stalin dispatched a coded telegram on January 20, 1939 to the committee secretaries of provinces and regions, to the central committees of republican Communist parties, to the [republican] People’s Commissars of Internal Affairs and to the heads of NKVD organizations. This telegram stated:

“The question arises as to why the socialist intelligence service should be more humanitarian against the mad agents of the bourgeoisie, against the deadly enemies of the working class and of kolkhoz workers. The Central Committee of the All-Union Communist Party (Bolsheviks) considers that physical pressure should still be used obligatorily, as an exception applicable to known and obstinate enemies of the people, as a method both justifiable and appropriate.”

Thus, Stalin had sanctioned in the name of the Central Committee of the All-Union Communist Party (Bolsheviks) the most brutal violation of socialist legality, torture and oppression, which led as we have seen to the slandering and to the self-accusation of innocent people."

Re: Further Confirmation of Torture to Extract "Confessions" / from the horse's mouth

In its June 20, 1949 edition, Life magazine published a superbly written article by the German-born Jewish writer, and early Hitler biographer, Konrad Heiden, about the memoirs of Goebbels' underlining Hans Fritzsche. Heiden concentrates on how Fritzsche detailed his psychological torture by the Soviets, being forced to sign a fraudulent confession, and then being raced off to be tried at the big Nuremberg trial, which ended up acquitting him.

Below is the story's headline and some of the illustrations which accompany the article. 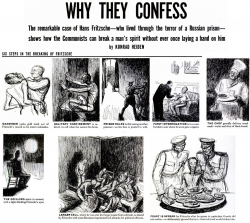 Nazis tried to create super-soldiers, using steroids ... they sought to reanimate the dead—coffins of famous Germanic warriors were found hidden in a mine, with plans to bring them back to life at the war’s end.
- Prof. Noah Charney
Top
Post Reply
2 posts • Page 1 of 1